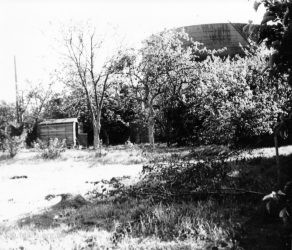 A flammable gas, often known as swamp gas had been known about for some time and was responsible for many explosions in coal mines. It was found that large quantities of the gas could be extracted by heating coal and the remaining coke was still a useful fuel; which also was ‘smokeless’ compared with the original coal when burnt. When produced on an industrial scale, this ‘coal gas’ was then stored in a large structure called a gasometer and pumped through pipes into homes. Gas lighting in homes was first experimented with in England in 1786 and the Gas Light & Coke Co. was established in London in 1812. It was however some time before this totally replaced oil lamps and wax candles, which were very smelly and a serious fire risk; cooking and heating relied on solid fuels such as coal or wood. A gas stove factory was established in England in 1836 but the stoves only became widely available much later in the century. The first district to be illuminated by gas street lamps in Great Britain was St. Margaret, Westminster in 1814, but it was over 20 years before that luxury came to Faringdon. Many homes, especially those further from the centre of Faringdon were not supplied with gas even one hundred years later, and no electricity either.

Extract from a childhood memoir of the 1930s in Faringdon

“Dark winter evenings were lit by the warm glow from paraffin lamps and candles, which were also used to light our way to bed. Special care had to be taken with candles and matches because of the risk of fire from the naked flames but we learnt at an early age how to spit on our fingers and pinch out the fames. During the depths of winter it was not unusual to find half an inch of ice frozen to the inside of the window panes when we very hurriedly dressed whilst running on the spot in an effort to keep the blood circulating. I didn’t experience the luxury of running water from a tap or light from an electric lamp until after the onset of World War II.” More memoires of Faringdon…

The Establishment of Faringdon Gas Works 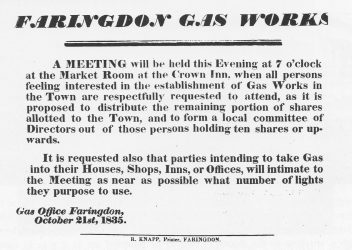 At a committee meeting in Faringdon on 1st December 1835 it was resolved that each shareholder would subscribe 5s per share towards the cost of street lamps and their erection. There were to be seven gas lamps in Gloucester Street, four in Marlborough Street, five in Corn Market and Market Place, five in Church Street and five in Bull Street, now London Street. A lamplighter had to manually light the lamps each evening and turn them off at 10 pm until an automatic system was installed. It was also proposed that the main gas pipe would be extended up to Dr. Bowles’ house, now known as Sudbury House. The coal came via the Berks and Wilts Canal and was landed at Longcot Wharf to be transported to Faringdon.

In 1863 George Norton was the manager at the gas works. John Hunt, William Noad, and Eaden Caddy, were company clerks in the latter part of the 19th-Century. and early 20th-Century. Some of the workmen in the early part of the 20th-Century. were Jack Page, Jack Davies, George Hall, and Harry Hancock. One of there jobs in his time was to go around the streets and light Faringdon’s gas lights. After retirement Harry and his wife had the only gas fridge in town; they ‘didn’t trust’ electricity. In the 1930’s the Faringdon Gas, Light and Coke Company was taken over by a Swindon concern and actual production of gas in Faringdon stopped in the 1940’s. 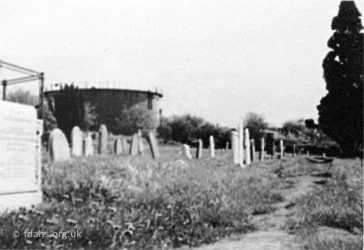 The gasometer, next to the Free Church Cemetery in Canada Lane, previously Gashouse Lane was still there in 1966 when these photos were taken. There was a cylinder inside which would rise to twice the height shown when it was filled with gas. It had stopped being used for the storage of coal gas back in the 1940s after a company in Swindon had taken over. The site was taken over by an environmental waste treatment company but has now been left abandoned since the year 2000.

In the later half of the 20th century large resources of ‘natural gas’ were discovered deep below the North Sea. This was a much purer source of methane and not deadly poisonous like coal gas. Faringdon was converted to natural gas in April 1972. This involved a gas engineer visiting every home in order to replace the jets in all gas appliances – gas fires, cookers, and central-heating boilers, the latter not so common in those days.

Electricity didn’t start arriving in Faringdon until around 1911-12 and for many of the 27 surrounding villages not until the development of the National Grid in the 1930s. In the early days, houses were wired mainly for lighting only, but when radio came along (BBC 14 November 1922) a wireless (radio) could be connected to a light fitting using a special bayonet plug once the bulb had been removed. Electricity was originally supplied by the Faringdon Electric Light Company from a local generating plant, which at the end of 1925 was purchased by a larger national company, Edmundson’s Electricity Corporation Ltd. In 1927, the price per kWh unit of electricity was 1s 2d (6p) and a service charge 15s but 10s for the two summer quarters was introduced. It caused some controversy as it was to be charged whether a minimum amount of electricity was used or not. In 1931 the new owners, Wessex Electricity Company raised the charge for electricity meters from 1s as it had become to 2s 6d (12.5p).

In 1959/1960, the old gas lamp standards (posts) that previously had been converted to electricity but were dimly lighting the streets of Faringdon were replaced with new standards having fluorescent lighting. The Faringdon Advertiser, Thursday 7th January 1960 reports that “the new street lighting in the centre of the town was switched on (in December) to replace the old and none too effective lights. This duly figured in the BBC sound radio news. Incidentally, the electric street-lighting of the rest of the town is progressing apace: the lamp standards are now being connected in the Marlborough Gardens area.” ]