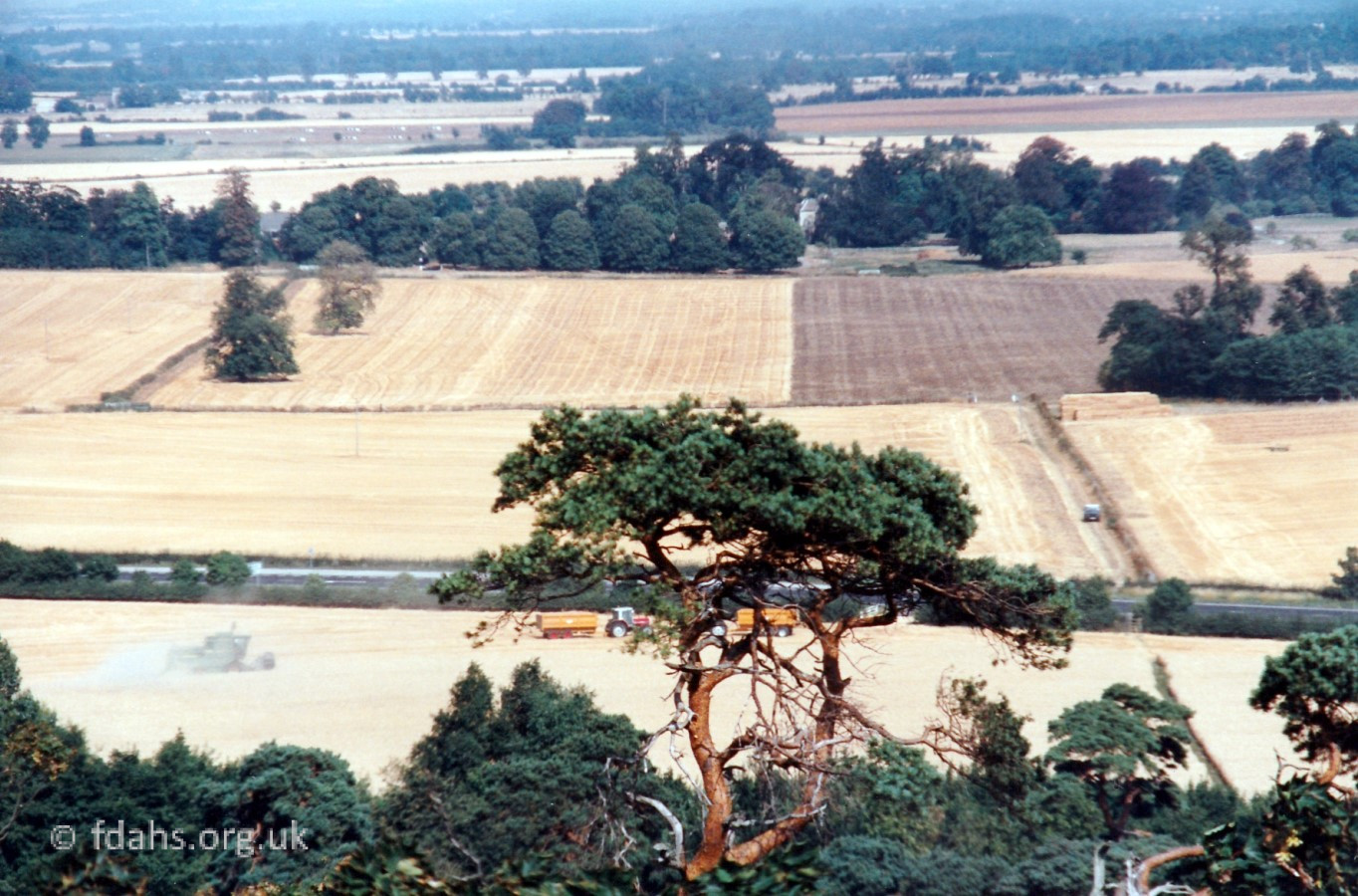 Agriculture, the art and science of cultivating the soil, growing crops and raising livestock, together with a wide variety of spin-off industries from cheese making to brewing, were for many centuries the main occupations on the Vale of the White Horse and down in the Thames Valley around Faringdon. (Photo taken from Folly Hill looking over the bypass into the Vale of the White Horse)

A Day in the Life of a Farm Labourer 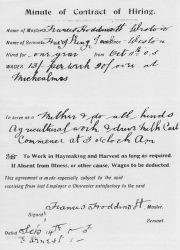 1905. A rare copy of a contract of hiring. Weston Farm is in the parish of Buscot. Note the time of day that he was to start work. He would be expected to prepare the milking shed by lighting the lamps, getting the food for the cattle ready, doing any cleaning that was necessary making sure that the stool and milking bucket was on hand and that the chum was there for the milk to be placed into. In the wintertime the cows often stayed in the shed all the time, but during the rest of the year he would have to go to the field to bring the cows into the milking shed. After he had finished the laborious task of milking each cow by hand the pails of milk would be carried, by attaching them to a yoke on his shoulders, to a big hopper where it would gently pass through a cooler into large churns. The cows would be returned to the field and he would have to finish any task undone in the milking shed. The task of milking cows was done twice a day, every day. At this time the calves were not de-horned and as they grew older these horns could, and were, used to inflict injury on many a farm worker. Some cows, when they were milked, would give a nasty kick with a hind leg, upsetting the milk pail and sending the milker sprawling on the ground. In the mornings, after the milking was completed, the dairyman would drive the milk cart and deliver to the local houses or take the milk to the railway station to send it off to London.

1909. Mr. William Panting went to work for Mr. Adams at Wadley Manor at age 13, working on the farm from 7am to 5pm six days a week for 6d (2½p) a day. Another 6d could be earned from 8am to 4pm on Sunday for scaring crows. He worked for many years in the stables with 14 great Shire horses and then received 6/- (30p) per week, plus 30/- (£1.50) Michaelmas money. A ploughman was then paid 14/- per week, but he had to start at 5am. He also said that in those days most farmers employed their own blacksmiths, wheelwrights, carpenters and painters.

(Michaelmas is a Christian celebration on 29th September, in other words an equinox or harvest festival and an important point in the year and big part of life in those days)

Extracted from an interview published in the Faringdon and the Vale Venture, Issue 21, December 2nd 1972

As well as showing the harvest in progress on the slopes of the Folly Hill, these photos provide splendid views over the Vale of the White Horse to the Berkshire Downs in the distance. The photos were probably taken during the 1980s or 90s as they are certainly later than the opening of the bypass – there is a red lorry travelling along it in one of the photos. 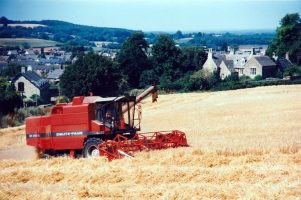 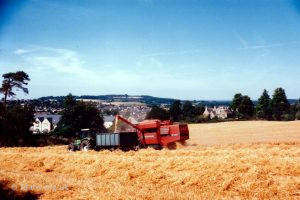 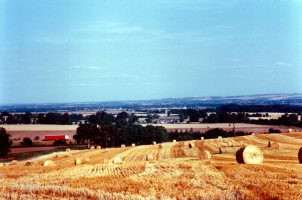 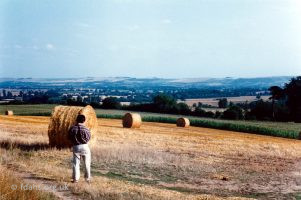 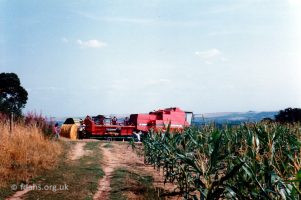 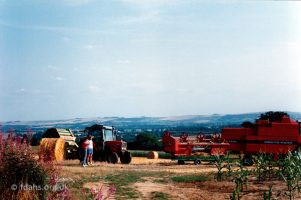 Photographs from the Brian Brady Collection Z2000 stored in the society archives.

One Big Step for Organic Farming 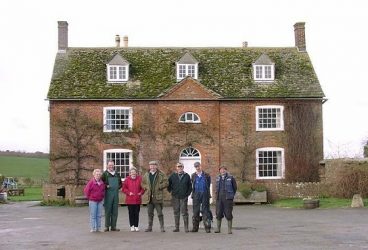 There are now many organic farms in the Faringdon area but in 1982 Step Farm was the first large organic farm to be certified in the UK. It is an award winning farm in the Thames Valley off the Lechlade Road, part owned by the National Trust and by Miles and Annabel Saunders, who are the fourth generation to be there. A report made public in 2003 stated that Step Farm covered 1500 acres; the crops grown were wheat, barley, oats, and field beans; livestock included 270 dairy cows and 6 highland cattle; employees were 1 herds person, 1 relief, 2 arable workers and some extra help in summer. 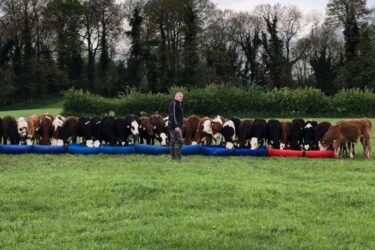 Nowadays there is a large dairy herd of around 400-800 pedigree and organic Friesian cattle. Photo extracted from the farm’s Facebook page. In 1994, five local dairy farmers including Miles and his father Patrick Saunders created the Organic Milk Supply Co-Op. They are now collecting organic milk from many more farmers in the UK and have expanded into yoghurt, cheese and ice-cream production. They are producing a mild Cheddar cheese called ‘Kingdom’ and exporting surplus to the USA and Europe. The cheese has won three gold medals at an International Cheese Competition. Conservation is also an important aspect of the work on the farm, with a new pond, hedgerows, and a site of special scientific interest having been created.

A public footpath and bridleway, connecting the Highworth and Lechlade Roads passes directly through the farmyard, passing by the cattle sheds and silage pits. A fact that surprises many foreign visitors from the ‘new world’, but then this was how the common people once got to work every day, not by travelling tens of miles into the cities like they do today. This public right of way forms part of the northern section of the complete Faringdon Circular Walk, as published in 1999 in a pamphlet by Oxfordshire County Council. (This northern section of the whole route that completely encircles the town, passes through a number of farms in the valley but now seems to be missing in the current online version of OCC’s Faringdon Circular Walks.)