Extracts from a collection of memories of life in the early part of the 20th Century; provided by a number of local people and stored in the society archives.

At home – “Dark winter evenings were lit by the warm glow from paraffin lamps and candles, which were also used to light our way to bed. Special care had to be taken with candles and matches because of the risk of fire from the naked flames but we learnt at an early age how to spit on our fingers and pinch out the fames. Our bedrooms all had wash stands on which stood porcelain bowls and jugs which were filled with warm water for washing and porcelain chamber pots were placed under our beds for us to use during the night. These were emptied in the morning into slop buckets and the contents disposed of. During the depths of winter it was not unusual to find half an inch of ice frozen to the inside of the window panes when we very hurriedly dressed whilst running on the spot in an effort to keep the blood circulating. I didn’t experience the luxury of running water from a tap or light from an electric lamp until after the onset of World War II. A few yards from the back door of the cottage stood a brick built wash house. This was home to a stone copper which sprang into life every Monday morning for the family wash. Coppers were very temperamental and often the fire would splutter and go out and the whole process of lighting would have to be repeated. The copper had to be filled with buckets of cold water from the pump and, once the water had boiled it was filled with dirty clothes which were boiled and stirred. Out would come the wash-board, the Sunlight soap, the blue dolly bag, the starch, the tin bath full of cold water for rinsing the clothes and then the wooden mangle would come into play. 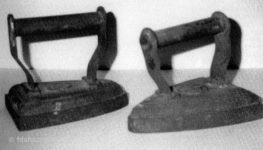 It was placed outside the back door near to the pump. If the weather was bad the clothes couldn’t be pegged out to blow in the wind to dry and with the arrival of winter and the bitterly cold, frosty weather, the clothes hung like stiff boards frozen solidly to the clothes line. On such days we seldom caught a glimpse of the fire as the wet clothes would be heaped around it on a clothes horse, steam would rise and the air would be thick with dampness – oh the misery of wash days. Every piece of clothing sheets and tablecloths had to be pressed with a heavy flat iron. Two of these stood constantly on the top of the kitchen range until they became hot enough to use, the best way to test them was to spit on their bottoms, if the spit bounced off they were ready.”

“I also had to cope with the washing – milking smocks and other very dirty clothes and many woollen socks (smelly). The copper was next to the stable, where the workshop now is, it (the copper) had to be filled from the stable tap by bucket, quite a few steps and in winter difficult when the frost was about. The water was heated by wood, a very quick and direct way really. I had galvanized baths, one for things not to be boiled, one for soaking, one for woollens (socks), all had to be filled by bucket. After boiling sheets and tablecloths etc. the smocks were put in after first having been well scrubbed, they were very mucky. Then all had to be rinsed, sheets etc rung out. I did inherit a mangle from home. The clothes dried easily in summer but in bad weather they all had to be dried indoors, there was a wooden rack attached to the kitchen ceiling and it was always full.”

“Best clothes were always kept for Sundays – shoes, dresses, coats and hats were never worn other than to Church or on special occasions, like visiting relations, and always had to be hung up properly on our return home and our shoes cleaned in readiness for their next outing. Easter was a special event and new cotton dresses were made for my sister and I and we wore them, with new white plimsolls and new straw bonnets to the Church on Easter Sunday.”

“Milk was sometime delivered by a man in a pony and trap. He wore a long brown apron, highly polished leather gaiters and measured milk from a churn into our jug with a long handled brass measure. Often though, we would have to fetch the milk from Wicklesham Farm before going to school, but we were able to watch the cows being milked whilst we waited for the milk to be put through the separators before being poured into our jugs.”

“Another thing I did when no body was around was to go into the farm dairy and from the churns that had last nights milking in them and take a bottle full of cream from the top of the milk and tie the bottle to the horse’s reins, or put it on the tractor, what ever I was working at the time and the constant shaking would eventually turn it into butter. My mother made good use of that.” 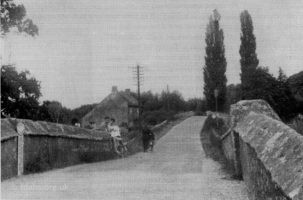 In summer – “the river was the big attraction, every one learnt to swim down the “shallows” To get to these you turned left at Radcot Bridge went through a small gate walk a long the tow path for a little way, then cut across country which cut off a bend in the river and that brought you to the shallows. The River Thames was only 2 1/2 miles away and we often walked there and stayed all day paddling about in what we called the ‘shallows’ where the river overflowed onto the low flat ground. The walk there was soon covered by leaping ditches and playing chase but the return journey when we were tired, hot and foot weary seemed more like six miles. My brother, who could not swim, used to jump from Radcot Bridge into the fast flowing main part of the river.” [ln the National School records for 1874 it says ‘June 4th Only 38 boys present, most of those absent having taken advantage of a very fine day to bathe in the river at Radcot.’]

“Most of our time was spent playing seasonal games. There was a Marble season where beautifully patterned and coloured glass marbles in various sizes were played for, the winner getting to keep the marbles. These were kept in cloth bags and greatly treasured. A season for whips and tops, hop scotch squares chalked on the ground, hoops driven along the lanes with sticks, ball games, skipping and cricket played on odd patches of ground.”

At school – “Discipline was tight and punishments were there for the least breach of the rules. Minor punishments were being kept in at playtimes and after school hours. Also writing out lines I must not do this, that and the other. Stiffer penalties was being told to go and stand outside the headmasters door, you’d stand there for an hour or more, prolonging the agony knowing what the outcome was going to be, and that was a caning across the palms of the hands. The worse one was a public flogging that when the whole school mustered in the hall and the offender taken on the stage, told to bend over and receive six of the best. The girls punishment was having to clench their fists and having their knuckles rapped with a wooden ruler – very painful. We never had any homework to do in those days.”

Faringdon Advertiser 31st May 1919: Now over a hundred years later I wonder whatever happened to this brave young girl, Nellie King.“RESCUED FROM DROWNING – A little girl 12 years of age, named Nellie King, of Southampton Street, Faringdon, performed a very creditable and brave act on Saturday last, and undoubtedly saved the life of a boy from drowning. A number of children were playing near a pond in Mr Tucker’s field, adjacent to the Cricket Field, when one of them, named Eric Alder, son of Mr C. Alder, of Southampton Street, fell into the pond, which at this point is about 5ft. deep. He was unable to get out, and Nellie King tried to assist him, but without avail, and she then very bravely climbed over a fallen tree and succeeded in catching hold of the boy as he was sinking for the third time, and bringing him out safe, but very much exhausted. He suffered from the effects of his immersion, and was attended by the District Nurse. Much credit is due to Nellie King for her plucky act and timely rescue.”

Faringdon & The Vale Venture 1972: Mr. William Panting of Leamington Drive has many things to remember in a lifetime spent in the Faringdon area. He was born in Oldfield Cottages, Eaton Hastings in 1896 and retired after 62 years of work on the Wadley Estates. He was interviewed for the following article: