Buckland consisted of four main manors, Buckland, Carswell, Barcote and Newton. The village of Buckland is situated just north of the road from Faringdon to Oxford. The name derives from the OE/Anglo-Saxon ‘bōcland’ (bookland) – a term that meant ‘land held by charter’ and was first recorded in 957. The Domesday Book of 1086 records it as Bocheland and later spellings include Bochland 1175, Bokelande 1338, and Buklond 1412. The 2011 Census recorded the parish’s population as 588. 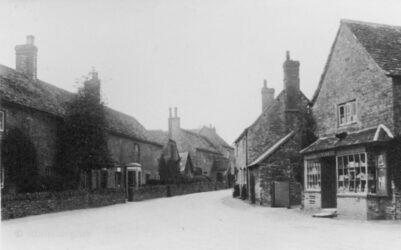 < Pre 1918 view of Buckland. One of the village shops in the square opposite the Post Office. This one was kept by Charlie ‘Duffy’ Pearce. He got the nickname Duffy from putting up large advertising boards for Pearce Duffs Custard. The boards were placed under the shop windows and when he found out his new name they were quickly removed. The smithy used to stand where the Memorial Hall car park is now. The village also had a wheelwright, shoe shops, a brewery and a Post Office. The main street passed the vicarage door until the Enclosure Act of 1803. 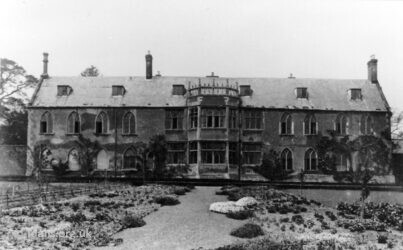 > 1920s. The old Elizabethan Buckland Manor House, which adjoins the churchyard, dates from the 16th-century and is a a Grade II Listed Building. The manor passed into the hands of the Throckmortons, a Catholic family, at the end of the 17th-century.

ln 1811 Sir John Throckmorton undertook a wager that it was possible to make a coat from the wool off the backs of his sheep between sunrise and sunset. The event took place on the longest day and attracted many sightseers and publicity. At 5am the sheep were shorn and the wool, after going through the various processes, was made into cloth by 4pm, the tailors completing the coat by 6.20pm. Sir John wore the coat that evening at a dinner to celebrate the achievement. 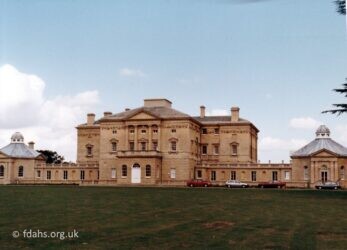 < Buckland House, a little to the west of the village and also a Grade II Listed Building, is a large Georgian stately home built in 1757 for Robert Throckmorton. He previously lived in the manor house next to the church, which following his death in 1791 was later converted into stables.  Extensions were added to the new house in 1910.

Buckland House was purchased in 1908 by the Fitzgerald family and then passed to the Wellesley family, who later moved back to the Manor House. Buckland House was leased to the Atomic Research Institute for 10 years and then in 1963 became an Independent University Hall taking around 60 students reading for an external degree of London University.

A Roman Catholic Church, dedicated to St. George, was built by Sir Robert Throckmorton in 1846. Opposite Buckland Lodge there was a Roman Catholic school which later became the village Reading Room. A Baptist
Meeting House was erected in the village in the mid 17th C. Most of the buildings, including The Lamb Inn, date from late 18th/early 19th C. The exceptions are the vicarage, built in the early part of the 18th C., and a few old cottages with thick walls, low windows and doors, and thatched roofs, which are probably 17th C. The pound
was at the far corner of the junction of Buckland Road and Summerside Road. Enclosure of all the common fields took place in 1804. 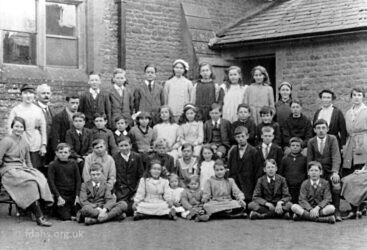 > Buckland School, pupils and staff 1920s. At this time the schoolmaster was John Lewis Fletcher, he was assisted by his wife Mrs H. Fletcher and his daughter Miss D. J. Fletcher. A National Endowed school, for mixed infants, had been erected in 1857 for 150 children and was enlarged in 1896 to provide for 226 children, it is still thriving today. In 1895 the mistress was Miss Kate Kelly. 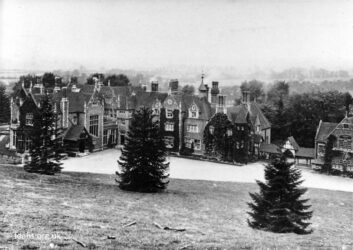 < c1923. Barcote Manor, a Grade II Listed Building, situated between the villages of Littleworth and Buckland. It  was built in 1870 for the writer Lady Theodora Guest, a daughter of the Duke of Westminster, for use as a hunting lodge. In 1880 she sold it to William West. He built the Lodge and entrance gates, Barcote Barn Farm and two adjacent cottages, and Barcote Cottages on the A420. The old Manor House was probably built in the 17th C., it is now referred to as Barcote Farm House. William West’s son, Archibald, was interested in the railway and was a director of the G.W.R. It was said he could stop passenger trains at Challow any time he wished to board one. In company with some railway friends he formed a class of engines named after certain manors and the one called Barcote Manor was built in Swindon in 1938. During WWII a troop of Berkshire infantry was billeted in the stable. They had a stove pipe running up through the stable roof which was lined with hay and when the stove was lit the roof caught fire and collapsed. In 1950 the estate was sold in various lots. The Manor House was sold to Mercantile Bank of India before being sold on in 1964 to become an international boarding school called Barcote School of Coaching. ln 1973 it was purchased by the Tennant-Eyles family who lived there until c.1996. It was again sold and has since been fully refurbished and converted into four houses. The stable block was also modernised and is now eight houses.