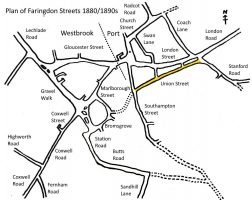 Ferndale Street formally known as Back Street and then Union Street was literally a ‘back street’ to London Street. It became known as ‘Union Street’ after 1801 when The Faringdon Poor Law Union, commonly known as the Workhouse was built. That was demolished in 1968 to be replaced with the Lansdown Road Estate and Brackendale Sheltered Housing. About the same time, a link road called Hart Avenue was built to link Ferndale Street to Bromsgrove. It was hoped that this would help alleviate traffic flow through the town centre before the bypass was built.

** Raymond Hutt donated his verbose photographic tour in and around Faringdon to the society: Hutt Collection 1953 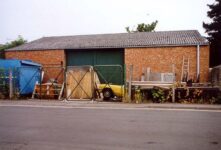 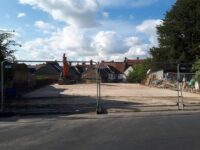 2000 – the first photo is No 13 Ferndale Street, which was before/on the corner of Skinners Lane. There were 4 similar buildings, one behind the other. It was an architectural salvage site, but empty for the last year or two. In 2021 – the second photo, the site has been cleared ready for four houses, according to the planning permission. Pagella’s fruit and veg merchants used to be on this site back in the 1960s. 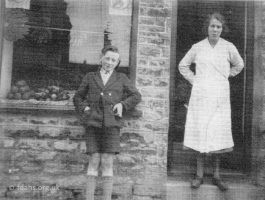 c.1930’s Annie Dixey outside her shop, the boy is thought to be ‘Stoker’ Edgington. The shop was in front of the Workhouse on Union Street, once Back Street and now Ferndale Street. Later on the Dixey family ran a café as well as the shop. Frederick Dixey used the Workhouse gardens to grow vegetables which he sold in the shop. They had four sons, one dying at a young age, and two daughters. Mrs Dixey died in 1943.

The following shops/businesses/traders were advertised in Back/Union/Ferndale Street, Faringdon in the year stated: 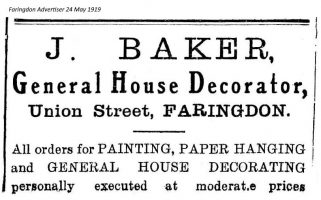