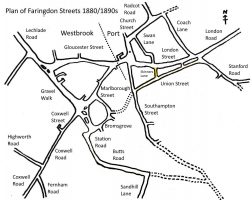 Skinners Lane or Alley is a short passage-way linking London Street with Ferndale Street and directly opposite Swan Lane. It was originally known as Colliers Lane or Row and as such was referred to in deeds of 1689. The family name of Collier was in the town during the 16th C. and 17th C. so presumably they had a business there or owned the land. The name was changed in the late 19th C. or early 20th C. and called Skinners Lane after Skinner’s Bakery which was located along the alley. 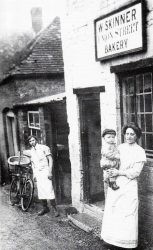 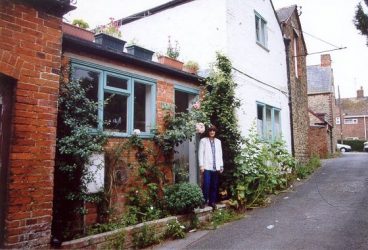 1914 & 2000. W. Skinner’s bakery is or was the white building shown in both photographs. In the older photograph is Mrs Skinner holding her 2 year old son, Norman. Mr Legge, the delivery boy holding the bicycle, was killed in WWI. They were still trading in 1953 but gave their address as London Street in an advert at that time. Note that the shop front in the photo says Union Street (now Ferndale Street), which is visible at the end of the alley in the second photograph, with the recently closed pub called the Bakers Arms on the corner. The National Trust used these premises after the bakery closed and tried to revive the old name of Colliers Lane or Row, but the Post Office would not recognise it. The single floor building shown in both photos has since been demolished and by 2008 had become a two-story house. 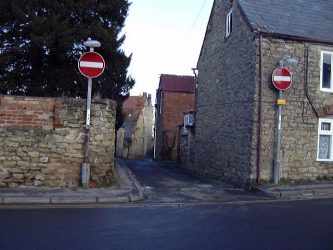 2000. Entrance to Skinners Lane from Ferndale Street. The two large buildings on the right can be seen from the opposite direction in the newer of the two photographs above. The white bakery building is out of sight here, just behind the red brick building. The Bakers Arms is just off photo to the right, next door to the first building. The photo at the top of the page looking up the alley from London Street in 1953 shows a sign to the Bakers Arms where the gap is between these two buildings. This was presumably a back entrance to the pub. The pub closed down during the 1990s and is now a private house.