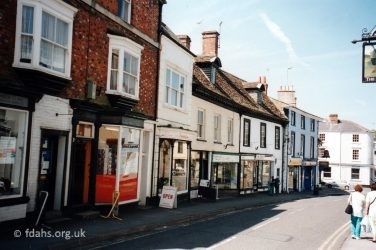 The following pages attempt to record the history of occupation of the local shops and businesses in the older and more central parts of Faringdon:

Some information on shops and businesses in the rest of the town may be found on the more general Faringdon Streets pages.

Also an excellent document compiled by this society in 2005 and well worth reading is Faringdon History Walk.

The following shops and businesses were advertised in the years stated but without any address and have not yet been located: 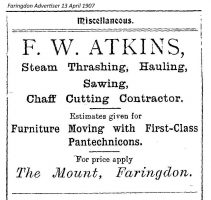 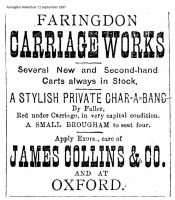 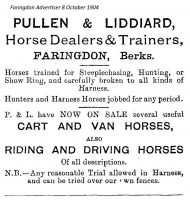 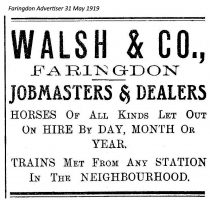 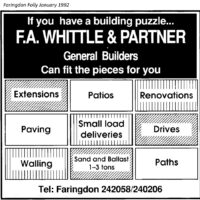 Lists of shops and businesses from newspapers adverts in alphabetical order by name:

The contents of these documents have also all been listed on the individual street pages, or above if the street is currently unknown.

1. The photographs shown are from a millennium project called fotoFARINGDON2000. Twenty three amateur photographers volunteered to undertake the massive task of photographing every building in Faringdon and as many of the residents as wished to take part. This unique collection of photographs was made into a virtual tour of the town, and recorded on a CD *. Copies of the CD are lodged in the Oxfordshire County Record Office, the Centre for Oxfordshire Studies, the Town Library, and the Faringdon Tourist Office so that future generations of local, family and social historians will be able to access a digital record of Faringdon as it appeared in the year 2000.

2. Each photo has a street number to match that shown on the map at the top of each page. The text under each photograph shows what businesses there once were at each address, the furthest time ago listed first. The year, where added is intended as a rough guide. It is the earliest year for which there is independent evidence available and may, but not necessarily be, the first year of that occupation.

The text under each photograph was obtained initially from lists entitled Faringdon past_businesses_july2014.xlsx, created by Gene Webb of www.faringdon.org in 2014, which she says may not be entirely complete or accurate as much has been obtained from the memories of local people. That file has now been withdrawn and converted to a web page at www.faringdon.org/past-shops-various-streets.html.

3. Some further occupancies and dates were obtained from advertisements placed in the programmes produced by Faringdon Dramatic Society since 1949 and the various shops that have been used over the years for their ticket sales. I have collected these programmes from many people and made them available from the website archives on www.faringdondramatic.org.uk.

4. The following 3 books produced by members of FDAHS were used to provide information mainly over the period 1880-1950: “The Changing Faces of Faringdon and Surrounding Villages” by Rosemary Church, Jim Brown, Millie Bryan and Beryl Newman. Robert Boyd Publications. More detail…

5. Many updates and additions have been made since studying local newspapers and photos in the FDAHS archives.

Researched by Ian Lee, aided by the above, April 2019