Highworth Road – This, the first main road off the Coxwell Road runs along the greenstone ridge overlooking the Thames Valley and links the ancient hilltop settlements of Coleshill, Highworth, Blunsden and Swindon. According to John Ogilby’s 1675 strip map of the route from Oxford to Bristol, this was the main route out of Faringdon, going through Highworth, Blunsden and Purton, which is to the north of the then insignificant village of Swindon, then onwards to Bristol via what are now very minor cross-country roads today.

On this OS map of 1910 (bottom left corner) there were no houses at the start of Highworth Road at that time, except for three farmhouses, and no side-roads up until the turning to Great Coxwell, just before Badbury Hill. The first two farmhouses were, Fairview, which is still there as a private home at No 28 and Viewlands, now demolished to build Westland Road. Both lost their farms due to expansive housing developments in the 1970s. The third, Highden Farm (off the map) further up, on the left where the road bends sharply, remains as a working farm.

Houses and bungalows were strung along the left side of the road in the 1920s followed by the right side in the 1940s. Westland Road was then created in the 1960s followed by Orchard Hill in the 1970s. Recently a field opposite the turning into Westland Road on the northern slopes of Humpty Dumpty Hill escaped plans for a large housing development and was declared a town or village green. In 1920/21, a new housing development called Bellmount View is currently taking place on the opposite side of the road on the fields that surround the old Council Highways Depot between Westland Road and Highden Farm. The latter became the FAZE Youth Centre for a while. Further up the road is Badbury Hill, then the village of Coleshill and across into Wiltshire to the town of Highworth.

A field on the steep slope leading down into the Thames Valley off to the right (north) of Highworth Road with far reaching views over National Trust land. A green open area which serves a purpose as an unofficial and very popular recreation space for walking, dog walking and winter sledging, and is right on the boundary between town and country. A public footpath runs down the right-hand edge bordering the Orchard Hill housing estate. It is well used for access to Canada Lane and both the infant and junior schools. The tree-line below marks the start off an ancient track and footpath across open country to Badbury Hill running parallel to Highworth Road and linking up many farms and estates on the way. 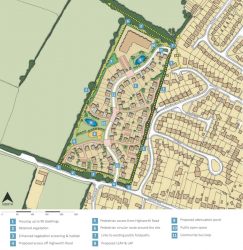 At the beginning of the 21st century, numerous green fields surrounding the town were being allocated for large housing developments and in 2013 developers were lining up to get speculative building development plans for this site accepted. The local population rose up against it, petitions were signed, and many laborious meetings were attended (myself included). In March 2013, the Vale of the White Horse District Council refused planning permission submitted by Gladman Developments Ltd to build 94 houses on the site, but then the company put in an appeal. In April 2013, an application was made by local resident Robert Stewart to get the site registered as a Town or Village Green under the Commons Act 2006.

A public inquiry took place on 1st-9th July 2014 at Sudbury House. At the end of it all, the inspector recommended that the appeal be allowed and building permission granted.  As a consequence, in November that year, Faringdon Town Council voted, against much protest from those present at the meeting, to remove the earlier designation of the site as a local green space on the Faringdon Neighbourhood Plan, which was being developed at that time. In February 2015, the secretary of state at the time disagreed with the inspector of the inquiry, dismissed the developer’s appeal, and gave the go-ahead to allow the site to be registered as a Town or Village Green (TVG).

A further 5-day public inquiry took place in March 2015 at the Sudbury House Hotel to discuss this matter. It was hotly contested by the developers and land owners. Issues were raised by institutions such as the National Trust, Natural England and Thames Water, and by many local people. Masses of folders four inches thick appeared on the desks. The following September, planning inspector Dr Charles Mynors published a very thorough report (occ-humpty-hill-inspector-report-2015) on the inquiry and recommended that the field should receive TVG status. Thus in November, Oxfordshire County Council’s planning committee voted unanimously to register the area as a town or village green – it was declared that “the meadow must now remain open space and cannot be developed”. However, the inquiry’s recommendation and the County Council decision were challenged by the land owners and Gladman Developments, but the decision was upheld by the High Court in October 2016. This hopefully final success made the BBC News – https://www.bbc.co.uk/news/uk-england-oxfordshire-37794042.amp?fbclid=IwAR0zzVg7pk_RPy8LNI6IPEJOlGMOAJvFVONxgsK-610SIXtYFP7YhnA3gxs

Apparently an appeal would still be possible but as yet in 2021 none has been reported. It has to be said that if it wasn’t for all the hard work and determination lead by one individual, Robert Stewart, throughout this process then the developers would very likely have had their way in the end. One can only imagine how much all of this cost to prevent a field totally unsuitable for development for so many reasons from being buried under concrete.

(There may be some dispute over the exact location of ‘Humpty Dumpty Hill’. An elderly local resident told me that he thought the name referred to the much steeper slope further up the road, which is opposite Highden Farm – see snowy photo above. But it is all part of the same hill really.) 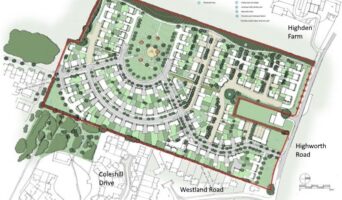 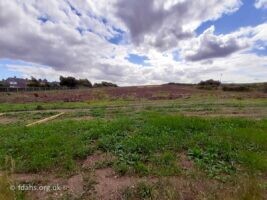 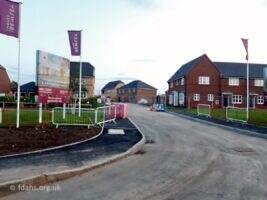 In May 2020, plans were accepted for a housing development on the opposite (south) side of Highworth Road, between Westland Road and Highden Farm. These are the two fields on the very summit of Humpty Dumpty Hill surrounding the old Council Highways Depot. Bewley Homes are now building an estate here called Bellmount View, which will contain 190 new homes. The entrance road is called Stevens Way. According to planning permission the houses with a garage are to include a charging point for electric vehicles (few houses have been built with garages). Pedestrian crossing points on Highworth Road are again promised. Although the estate is in an ideal position for solar panels, their installation has not been required. 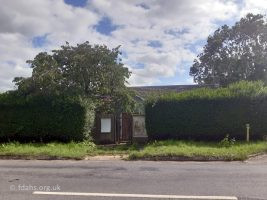 The buildings opposite the lay-by on Highworth Road belonged to Oxfordshire County Council and were used for composting activities and storage for highways equipment – their gritters, salt, tarmac, and lorries. The site appears marked out on the map of 1910 above but shows no buildings and is not labelled. It may have been the site of the tented fever isolation hospital that was reported to be around there at that time (see photo below). Planning permission for the change of use of the single storey building at the front of the depot to a youth centre was granted in January 2007. It had not been used by the depot for some time and had been used in the past as a day centre for adults with learning difficulties. Subsequently, the pavement and street lighting were extended up to the lay-by; but a promised pedestrian crossing for safe access to the centre was later deemed unnecessary. (Reference: Oxfordshire County Council PN210708-11). The Cromwell Centre, as it was first called was officially opened by Lord Faringdon in 2010. It later changed its name to Faze Youth and Community Centre but was closed around 2015/16. The council depot at the back was no longer in use and the whole site has been left derelict since.

Badbury Hill sometimes called Badbury Clumps is an area of scenic beauty owned and maintained by the National Trust. It is situated on the Highworth Road about half way between Faringdon and Coleshill. The summit of the hill is the site of an Iron Age hill fort from about 600BC known as Badbury Camp. Unlike other hills on this ridge, the site does not seem to have had a continuous settlement, possibly due to the lack of a permanent supply of spring water. Littered with footpaths, the mixed woodland is a popular site for dog-walkers and family outings.