Originally the building belonged to the First Primitive Methodist Church then the Church of England Mission Hall. In 1947, Burtwell & Drew took over and turned it into a shop selling electrical goods. The building was set back from its neighbours so in about 1958 a new shop front was added. The business closed in 1988 and the building was converted into a private house (fifth photo 1995). The front extension was later removed and replaced with a front porch and garden (last photo 2018). 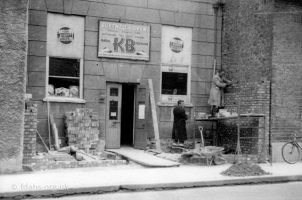 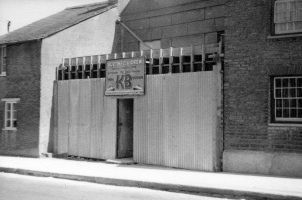 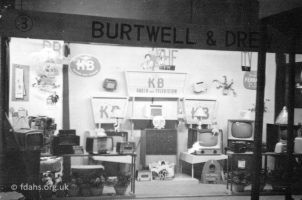 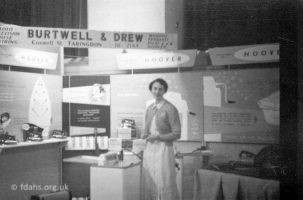 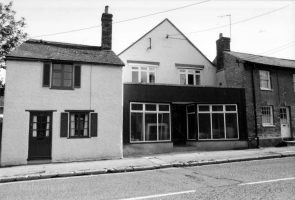 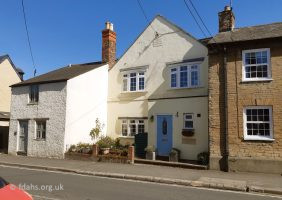 During the post-war boom years of the 1950s and 60s, people were finding themselves with surplus cash to spend on all the domestic electrical goods that were flooding the market for the first time. In the UK, items such as televisions, washing machines, vacuum cleaners, and refrigerators were becoming almost affordable and much sort after additions to every home, following the austere war-time conditions and rationing of the earlier decade.

Everyone wanted their very first television set in the late 1950s but they were very expensive and unreliable so were usually either rented or obtained by hire-purchase. There were only two channels – BBC and ITV. The programme schedules were evenings only, starting at 5:15pm and ending with the National Anthem playing at midnight. The small, almost square screen showed a black and white picture and was very poor quality by today’s standard. To buy this one outright was £65, which was then 3-4 months salary for a full-time shop worker, equivalent to around £5-6000 today and you would be continually paying out to have it repaired. To rent or hire-purchase this one was not particularly cheap either at half a day’s pay (now around £40) every week for 3 years! A third channel BBC2 arrived in 1964 and you had to get a new TV if you wanted to watch it, as you did again only 3-5 years later when programs slowly started to be available in full colour.

Every housewife wanted the new semi-automatic, twin-tub washing machine. The price, not mentioned in this advert, was about the same as for a television. The water had to be poured in using a hose that you fitted to the tap on your kitchen sink and another hose drained the water into the sink afterwards.The left side was for washing the clothes and if it had no heater it had to be filled from your hot water tap. A spinning paddle swirled the water around to help wash the clothes, but because it spun only in one direction it also tended to tangle them up. The right side was a spin dryer, which could also be used for rinsing the clothes first. There was a switch to turn the draining pump on/off and a clockwork timer for the washer and spin drier. Not much automation but a big step up from washing by hand using the earlier single-tub and mangle.

And who wouldn’t want one of these state-of-the-art vacuum cleaners? Only £1200 out of a shop workers pay today. (My calculations are correct in theory but that does seem a bit too high, as they were really quite affordable) It was an American invention from 1908 that started production in the UK in 1919. The main producer was a company called Hoover and the brand name became synonymous with vacuum cleaners and vacuuming in the UK. The overall design may have changed somewhat over the years since then but the concept of sucking air through a porous paper bag to collect the dust remained much the same for many years. The main problem was that paper bag soon got clogged up with dust and needed constant replacement to maintain the suction. Then James Dyson, a British engineer came up with his bag-less cyclone idea in 1978 and went into production with his new concept in 1993. 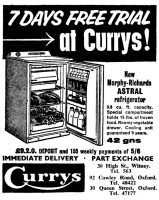 Like all the above, a domestic refrigerator was not a new idea, they had been manufactured and sold in America for many years before coming to the UK. During the late 1950s refrigerators started to become affordable for most households in the UK but only 13% of homes had one by 1959. It was a similar story with freezers, they didn’t become popular here until the 1970s and 80s. Before their arrival, food was preserved some other way – by smoking it, salting it, pickling it, or drying it. Bottles of milk were kept in a bucket of cold water – a common site on many a door step back in the 1950s.

An occupational history of other premises, as far as is known, can be found on the ‘Shops & Businesses in Coxwell Street‘ page. There is also a ‘Coxwell Street & Coxwell Road Views‘ page that contains general information and may contain further details on the premises shown.