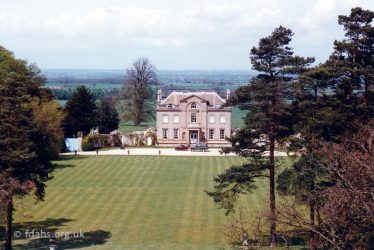 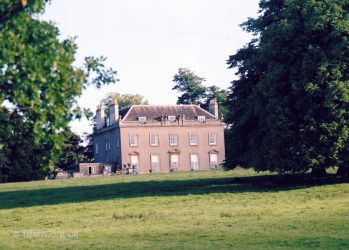 1984 Looking north across the lawns to Faringdon House and from the back.

The current house was built between 1770-85 by Sir Henry James Pye (1745 – 1813), poet laureate to George III, after fire had damaged the original one. He distinguished himself as being the worst ever poet laureate. The nursery rhyme ‘Sing a Song of Sixpence’ was written as a skit against him.

The house is now a Grade I Listed building and many of the features in the grounds are Grade II listed. Much of the material from the original was used in the new building and traces of charring can be seen on the underside of the oak flooring. At the same time he had the Radcot Road, which then ran straight up Church Street from the Market Place through the current entrance to the house beside the church and passing close to the house diverted by an Act of Parliament to its current position further up Church Street. In 1785, he had to sell the house and estate due to his and his father’s debts. 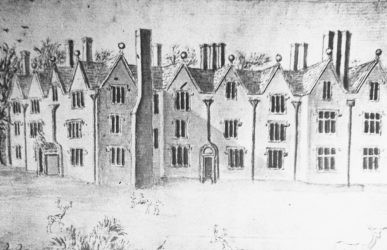 The drawing shows the original Faringdon House of over 200 years earlier, a rambling Elizabethan mansion between the site of the present building and the church. It was built in the 1590s for Sir Henry Unton (c.1557-1596), the English Ambassador to France. It was twice under siege during the Civil War of 1642-1646, being a Royal Garrison and one of the last places to hold out for the king. In 1646 fighting was so fierce that the church, in a position between the Royalists in Faringdon House and the Parliamentarian guns to the east of the town, lost its steeple, the top of the tower and part of the south aisle. Two canon balls were found in the debris of the belfry when the bells were re-cast. The old house burnt down soon after Sir Henry James Pye inherited it from his father in 1766. 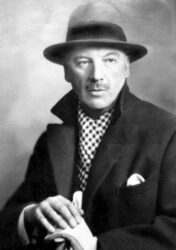 Lord Berners, Gerald Hugh Tyrwhitt-Wilson (1883-1950) inherited his title and baronetcy on the death of his uncle Sir Raymond, fourth baronet, in 1918. He sold his inherited estates as quickly as possible and was able to negotiate the purchase of Faringdon House and Estate. His mother and step father, William Ward Bennitt, were already occupying the house and they continued to live there until their deaths in 1931. 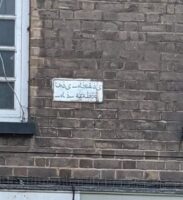 Lord Berners was a world-class composer, poet, playwright and a rich eccentric bachelor. He worked at a piano adorned with a beer mug that played the National Anthem whenever it was lifted. He installed a clavichord in his Rolls-Royce so he could compose on the move, and he drove around the lanes wearing a pig’s head mask to frighten the locals. If you wander around the town and look up in the right places you might see some of the eccentric signage that he was responsible for. It was all said to be that Lord Berners was “having a bit of fun at the expense of pompous people”. The photo shows one above Floyd’s Grill in London Street – if you look very closely you will be able to read what it says. 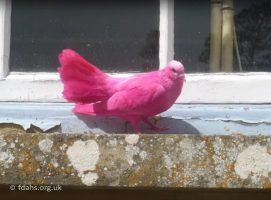 He is perhaps most well-known today for dyeing his pigeons in vibrant colours (using a dye that did them no harm) and in the early 1930s for building the Folly Tower. On the door to the tower was a sign that read ‘Members of the public committing suicide from this tower do so at their own risk’. The pigeon-colouring has become a tradition that continues today with the new owners and the evidence can occasionally be seen flying around the town. He lived there with his young companion, Robert Heber-Percy (1911-1987), known as the ‘Mad Boy’. Their home became an exotic playground for the great and the good, the famous and infamous: Salvador Dalí, Aldous Huxley, HG Wells, Stravinsky, Evelyn Waugh, John Betjeman, Elsa Schiaparelli, and Nancy Mitford. Nancy immortalised Berners in her novel ‘The Pursuit of Love’ as the whimsical Lord Merlin. Robert Heber-Percy inherited the property (but not the title) on the death of Lord Berners. He was said to be a charming and generous local eccentric. He worked with his estate workers on the upkeep of the grounds, had the swimming pool built near the house, started the town fireworks display, and set up the Faringdon Folly Tower Trust.

Further Reading: A full list of owners/occupiers of Faringdon House 1590-2018 and the earlier Manor since 1174 can be found on the Faringdon Community Website.