The Boy Scout movement was started as an experiment in August 1907 by Robert Baden-Powell, who the following January published his famous book ‘Scouting for Boys’, said to be one of the best selling books of all time. He was a cavalry officer in the Boer Wars and his aim was to develop good citizenship, chivalrous behaviour, and skills in various outdoor activities. The idea proved to be incredibly popular; the movement quickly took off throughout the country and spread throughout the rest of the world.

Scout troops and cub packs were soon established in Faringdon and all over the district. Local camps took place at Radcot. They all got together at the Whitsun Camp at Uffington every year to pick a troop to compete for the county banner, which was held every year at Reading. 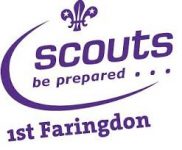 According to their website, the 1st Faringdon Scouts was founded in 2010. It runs three age groups, a beaver colony, cub pack and scout troop, welcoming boys and girls from Faringdon and the surrounding villages from ages 6 to 14. By 2018 there were three groups for each unit, providing scouting adventures for over 100 children in the town. 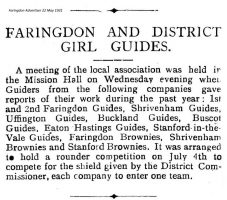 The Guide Association was established in 1909 after a small handful of girls gatecrashed the first-ever ‘Boy Scout’ rally that year proclaiming to be Girl Scouts.

This article2 from the Faringdon Advertiser in 1931 shows that Guides and Brownies were well established in Faringdon and the surrounding district; almost every village had its own group. There were two Guide groups and a Brownie group in Faringdon at that time.

There was no Guiding in Faringdon when Mr and Mrs Reeves arrived to live in the town in the 1940’s. Possibly the movement had been allowed to elapse during the war. Nancy Reeves (1920-2006) had always been an active member of Guiding, in Bournemouth, so she began Guiding here. She ran both 1st Faringdon Guides and Brownies for many years.

Mrs Joyce Harrison (also District Commissioner in Faringdon) was a Brownie Guider for 30 years with the 1st Faringdon Brownies along with Mrs Pat Fox. At one time there were 4 Brownie units and 2 Guide companies in Faringdon. Now there are three groups: Rainbows (ages 5-7), 2nd Faringdon Brownies (ages 7-10), and 3rd Faringdon Guides (ages 10-14).

The Brownies meet for two hours every week. They are always out and about whenever possible. Many visits have taken place in the past, including places such as Clearwell Caves, including deep level caving, Macaroni Woods, and the Palace of Westminster. They were invited by the Pearly King and Queens to lead the Harvest Festival service offering at St Martin-in-the-Field which was a great honour. Camping has taken place at Sibford Gower, Sutton Courtney and St Hugh’s. They have made eye fringes for ‘Horses in Tunisia’ and raised lots of money for an ‘Eye Appeal’, with appropriate speakers to come and speak to the girls so they had an insight of what they were making things for. 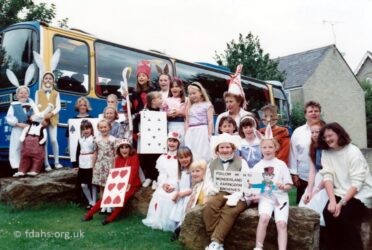 1993. The Brownies Adventure Underground 3 – All dressed up and ready to follow the White Rabbit are these Brownies from the 1st Faringdon pack, off on their annual holiday. The girls all dressed up according to the theme of the holiday Alice in Wonderland. They were based at a Brownie camp centre in Macaroni Wood, near Eastleach. But the highlight was a trip to Clearwell Caverns in the Forest of Dean, where special arrangements had been made for the girls to visit a deep level iron ore mine – entering by a normally-private access in an open field (the White Rabbit’s hole!). This charming report came to the Folly after the girls’ safe return, submitted by Brownie Guider Joyce Harrison:

“During our pack holiday we lived through the story of Alice in Wonderland and all the characters. The Brownies became Dodos, Gryphons, Lorys and Eaglets for the week. The Queen of Hearts (alias Mrs Harrison) was ably assisted by the Duchess, Mrs S. Viner, the White Rabbit, Miss A. Nolan, the Mad Hatter, Mrs D. Myatt, and Alice herself, pack leader Claire Ledward. We made ourselves into a pack of cards and played croquet on the lawn, we had a Caucus race in which we all won, and we had an extremely Mad Hatter’s tea party on the lawn. We dressed like Brownies sometimes, and once visited Eastleach where a friend of ours kindly showed us round and told us some of the history of the village. We played on a beautiful adventure playground, and paddled in the village stream. Dressed as our characters, we went off to find the White Rabbit’s burrow, and eventually found it in the middle of a meadow at the bottom of a tree at Clearwell Caves. We donned helmets and lights (we had not eaten as many carrots as the rabbits) and dropped down the White Rabbit’s hole with our qualified instructors, Nick and Jonathan. We toured the burrows – oops, caves – looking for any other rabbits. We put on some make-up from the walls of the caves (this was red oxide) and we all switched off our lights and for a moment experienced the world of the blind. Then it was back to the meadow again, followed by a wash and off to supper in the tearooms. Our parents came to collect us on Friday August 6, to take us back to Faringdon and reality.”