Football was being played in the town during the late 1800’s and the town football club started up in 1906. The first competition match was during the 1908/1909 season when they won the North Berks Cup. In the 1931/1932 season they were crowned North Berks League champions. Before 1939 matches were being played at the Swindon Town ground. A full history of matches can be seen on their website at www.faringdontownfc.com. 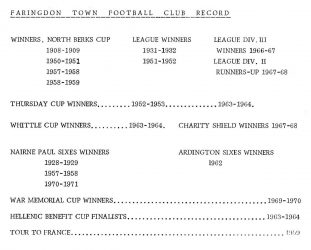 After 1945 matches were played at Step Farm and the club headquarters varied between the Swan Hotel and the Institute and Servicemen’s Club at the Old Pump House in the Market Place.

In 1951 a match was played against Swindon Town in Tucker Park as part of the Festival of Britain celebrations. The clubhouse at Tucker Park shown above in 1972, consisted of two changing rooms with showers and separate rooms for referees and refreshment facilities. An extension was added around 2014 to provide extra changing rooms and facilities were generally improved.