FIELD WALKING started soon after the formation of the society, prompted by the building of the Faringdon bypass in 1979.

A large part of the parish of Great Faringdon was covered and some significant sites were found and a great range of finds from flints, Iron Age pottery, Roman and Medieval pottery. Samples of these are kept for reference in the History Room above Faringdon Library, and the Sites were recorded with the Sites and Monuments Record at Woodstock with a record for the society. 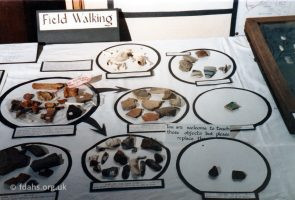 Field walking was a winter or early spring occupation, and by definition therefore cold and windy. It required concentration and keen eyesight but the rewards were exciting. Roman sites were the most rewarding, with chunks of pottery of Grey and Samian ware (if you were lucky) and mortaria fairly easily found. The occasional roof tile or Roman hypocaust fragment (under floor heating). Iron Age and earlier pottery types were more difficult to see and much coarser in texture. I only ever found one piece of Anglo Saxon pottery, which was whipped away to be sent to a specialist and never seen or heard of again! Stone Age flints could be found, but I always found it difficult to separate worked from accidentally broken fragments; a good worked core was obvious, but all those little pieces were much more difficult to differentiate. I remember being surprised that burnt flint fragments were ancient rather than the result of straw burning, then a common practice on arable land.