Faringdon was situated on an important and ancient five-way road junction receiving traffic from all over the country. The road from London to Cirencester, via Abingdon and Oxford, and then on to Gloucester, Bristol the West Country and South Wales crossed the road from the North of England, via Coventry and Burford, to Marlborough, Winchester and Southampton. Note that the streets in the town centre are named after the principal coach destinations. From 1635 a courier service ran between London and Bath and the Crown was where the mud-spattered post-boy riders changed their horses; but, because of their drinking habits, they were appallingly unreliable. According to John Ogilby’s 1675 strip map of the route from Oxford to Bristol, the route out of Faringdon was through Highworth, Blunsden and Purton to the north of the then insignificant village of Swindon, then onwards via what are now very minor cross-country roads today.

By 1773 Faringdon was connected by a turnpike to London and Gloucester, and by 1752 to Wantage and Wallingford. The Radcot Road provided an important trade route to the north into Oxfordshire and beyond. Turnpike roads were major highways during the 18th and 19th centuries usually involving a barrier for collection of tolls to pay for their maintenance. By the 1780s stagecoaches were used for delivering mail, which was more reliable than the post-boys and Faringdon is where the gummed envelope was invented! By 1813 horse-drawn coaches to London from the West Country came through on Tuesdays, Thursdays and Saturdays and by 1840 coaches were coming through twice a day. Horses needed to be changed, which explains the large number of mews and stabling around the town and the coaching inns for the travellers; Faringdon was a town known for its hospitality, ales and good food.

With the arrival of the railway in the mid 1800’s the importance of Faringdon as a major cross-roads in the south of England just disappeared and the town went into a decline from which it never really recovered. Faringdon did however remain an important market town for local farm produce, so it was still a busy place. There was a horse-drawn shuttle service provided for passengers and freight to and from Challow Station, 5.5 miles away towards Wantage, until a branch line was added to Faringdon in 1864. There were other services to nearby towns and villages at this time – photo above.

The Arrival of the Motor Car 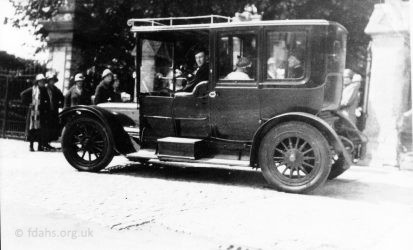 Anns’ Garage in the Market Place were advertising cars and vans for sale in 1914 and certainly by 1926 (photo) the internal combustion engine had arrived in Faringdon. But motor cars were still very expensive so the horse and the increasingly popular and affordable bicycle remained the main form of transport for most people around town and between the villages. Road conditions started to improve with the addition of tarmac but horses got their own back by frequently dropping nails from their shoes; punctured tyres became a common problem for many years to come. 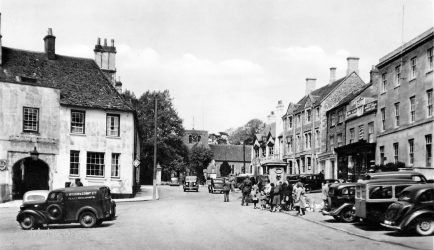 By 1950 only 1 in 10 households in the UK owned a car but parking space was starting to be a problem in the Market Place. The horse and cart was still a common sight delivery groceries, barrels of beer and other goods for just a few more years, but they were gone by the end of the decade. Motor bus and coach services were starting up, particularly after the war, to local villages and towns, and beyond. 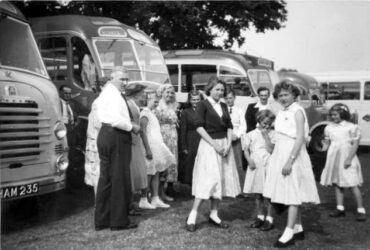 c1950s. A coach trip to somewhere with Eagle Motors. “Summer winter, wet or fine, travel best with Eagle Line”. They used to be based on Station Road, now the Eagles housing development. It belonged to Tommy Clare, who started up with an ex-Army lorry at the end of WWI doing haulage and later on branched out into coach travel. The driver here is Bert Bowley. Third from the left might be Peggy Spinage. Florrie and Pete Rogers are at the back. At the front are Gill Iles (Barrett) with her hand in her mouth and Eileen Tilling (Barrett) to the right with a watch on.

The A420 Through Faringdon

The A420, the major trunk road between Oxford and Swindon used to pass directly through the Market Place in Faringdon. During the 1950s and 60s more and more traffic was passing through Faringdon; lorries from Pressed Steel were passing every two minutes, in addition to other traffic. Commercial juggernauts and holiday caravans passing each other in the narrow section between the Market Place and Cornmarket often got stuck, blocking both road and pavement

In 1951 the Ministry of Transport was intending to build a relief road for Faringdon. It was planned to build a road from Coxwell Street through Bromsgrove, taking in the top of Southampton Street and out to the Stanford Road. It was still occasionally mentioned in the Faringdon Advertiser a decade later in 1962 but it never did happen exactly as planned. 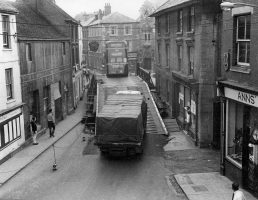 The situation was exasperated in 1963 when firms who had been laying telephone cables and gas pipes damaged the old brick culvert taking the brook under the road in ‘The Narrows’. There was absolutely no other possible route for all the traffic, so a Bailey Bridge (photo) had to be placed over the road while repairs took place underneath. (more…). 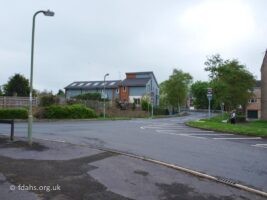 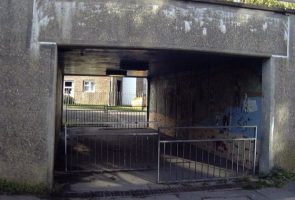 During the later 1960s, a link road called Hart Avenue (see map below) was built to ‘flyover’ the swampy valley of the old Faringdon Brook (now buried below the underpass) and join up Bromsgrove to Ferndale Street. A number of old buildings, including the old fire station, had to be demolished to make way for it. This effectively created a diversion route from Station Road via Bromsgrove and Ferndale Street right through to the start of Stanford Road on London Street. It was hoped that this would help alleviate traffic flow through the town centre and provide a much needed alternative route, but it was only a temporary solution.

Congestion was not the only problem as car and lorry engines were not as efficient as they are today with their catalytic converters, computer control, and better quality fuel; such that their exhaust was far more full of smoke and poisonous gases. Further more, the old town of Faringdon is nestled in a deep depression amongst hills on the greenstone ridge. A letter to the local newspaper (Venture, Issue 20, 18th November 1972) prophesied that “… the poisoned air will stagnate in the bowl of the Market Place, rather like a miniature Los Angeles …” The same letter, referring to a report on lead pollution, stated that “Every time a mother takes her children into town with her to go shopping, she is endangering their future a little more.” A big problem, now perhaps unknown to the young drivers of today, was that tetraethyllead had been added to petrol since the early 1920s to smooth out combustion and help lubricate the engine. Lead is an extremely nasty pollutant – it can cause brain damage, particularly in children and traffic in the UK was pumping 3000 tonnes of the stuff into the atmosphere annually. Japan was the first country to introduce ‘unleaded’ petrol in 1972, and to ban ‘leaded’ petrol in 1986. So back in 1972 the public were becoming conscious of this and in Faringdon it was the final straw, so they took to the streets in protest. (Not until 1986, did ‘unleaded’ petrol first go on sale in the UK and it took until 2000 for ‘leaded’ petrol to be finally banned.)

The Town’s People Have Had Enough! 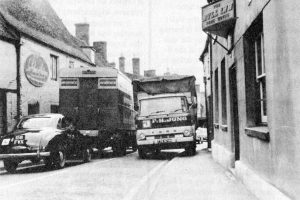 Saturday, 2nd December 1972, despite the weather, saw the largest crowd of people assembled in the Market Square for a long time. It was the day of the demonstration in protest at the traffic situation which we have suffered too long. 10.45am saw the demonstrators patiently lining the pavements awaiting the signal to begin their action. There were also present large numbers of people who had obviously come to see what happened. At 11 o’clock precisely the first volunteers took up their positions in the roadway. The first vehicle to be stopped was a car coming down London Street, and immediately behind it, a large lorry, whose driver took exception to the occasion and attempted to bulldoze his way through. The protesters were not to be baulked, however, and several people lay down immediately before the lorry bringing it to a swift halt. Another lorry which attempted to drive the wrong way around the traffic island was also swiftly stopped. Traffic approaching from Swindon was also halted, including one car which tried to go the wrong way past the Town Hall. A passenger in this car was most annoyed at this, got out from the car, and seemed inclined to use force to make his point. The demonstrators refused to respond in kind, and what could have developed into violence was peacefully settled. Indeed, the most remarkable thing about the whole affair was the quiet, self-control of the demonstrators in contrast to the heated and arrogant attitude of some of the motorists. The police who were present seemed more concerned to protect the demonstrators from assault by angry motorists than as one might have expected, the reverse. 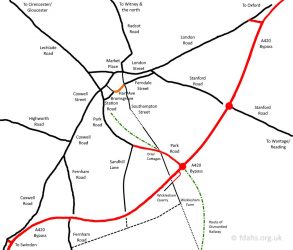 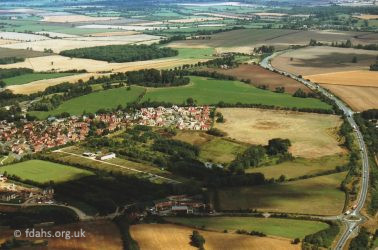 Work started on a new bypass in 1977/78 to make a wide sweep completely around the outskirts of Faringdon and it was opened in July 1979. It was 3 miles long and cost £1,600,000. As a result, the original roads like Stanford Road, Wicklesham Farm, Sandhill Lane and Fernham Road were completely cut off to traffic by the bypass and the twin villages of Little Coxwell and Great Coxwell were surgically separated. Park Road was extended along the route of the old railway line to make a new junction with the bypass, plus a little link was made back for access to Wicklesham Farm and Wicklesham Quarry. The roundabouts shown on the map above were added in 1992. 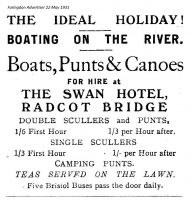 Faringdon’s importance as a market town declined during the 20th Century and the population remained as it had been for 150 years in the 2-3 thousands until the late 1970’s, whereas the nearest towns of Oxford, Swindon and Wantage were growing rapidly. Together with cuts in government funding this saw a decline in the provision of public transport for Faringdon, both road and rail. According to the tiny note at the bottom of this advert from 1931, five Bristol buses pass the door of the Swan on Radcot Bridge daily – there are none today. The same advert back in 1925 stated instead that a bus service was run on Saturdays and Sundays between Faringdon and Radcot. By the end of the 20th Century the only effective bus service remaining for the former five-way road junction that was Faringdon of old was on the 66 Oxford-Swindon route. Although this was and still is an excellent and regular service; it is very difficult to get anywhere else, of any distance, other than by car.