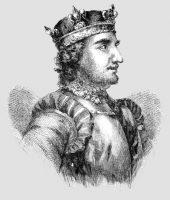 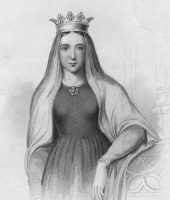 In the early half of the 12th century, England’s first major civil war, known as ‘The Anarchy’ broke out and lasted many years with battles taking place all over the country, including in and around Faringdon.

When King Henry I died in 1135, his daughter Matilda (Maud), now aged 23 and sole legitimate heir, laid claim to the throne upon her father’s dying wish. However, his more popular and preferred nephew, Stephen de Blois, Duke of Normandy was crowned king. However, upon Stephen’s death in 1154, Matilda’s son, Henry was crowned King Henry II, the first of the Plantagenet line of kings.

Matilda (or Empress Maud) had been living with her husband, a self-styled emperor, in Normandy. She was however a local lass with a very varied and noble ancestry and was able to find some support in England. She was born in 1102 at the Royal Palace of Sutton Courtenay in Oxfordshire. Her grandparents were William the Conqueror and his wife Matilda of Flanders and King Malcolm III of Scotland and the Saxon saint, Margaret of Wessex.

The Lord of Radcot Manor supported the rightful Queen Matilda, and Radcot Castle was held under siege until its surrender to her cousin King Stephen in 1142. This early 12th century castle was demolished in the late 13th century.

In about 1144, another supporter, Robert Earl of Gloucester built a castle for her on the top of Folly Hill. In 1145, Matilda occupied the fort when it was attacked and captured by King Stephen. This fort, which was doubtless only an earthwork with timber defences, was probably destroyed shortly afterwards. Archaeological excavations by E.T. Leeds during the building of the Folly revealed a single rampart and two ditches surrounding a central keep.