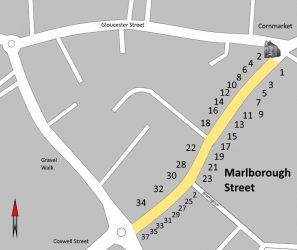 More photographs and information about the shops and other businesses in Marlborough Street. The photographs of premises shown here have been scanned in from the original photographs given to the Society over the years and stored in the Society’s archives. The numbers given for each property mentioned correspond as accurately as possible to the postal addresses and are shown on the adjacent map. 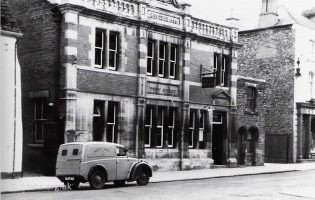 1953. #1 The Post Office in Marlborough Street. It was built in 1898 when the building housing Taylor’s fish shop was demolished. The small building at the end was used as a storeroom by Carter’s until it was demolished when the shop became a supermarket, The enamel signs on the facing wall of Bicester House (Carter’s) have been removed, thanks to pressure from Mrs Cyril Carter.

Around 2014, the post office moved to McColl’s Newsagents in the Market Square and was occupied by the Bangkok Kitchen for few years. Around 2017 it was split between Caprinos Pizza and Just Eat. 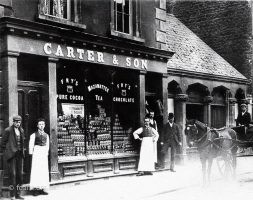 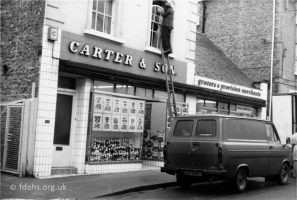 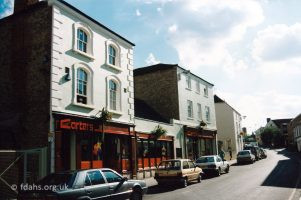 1916, 1970 & 1990s. #3-7 Carter & Sons in Marlborough Street (became Budgens). The shop was owned by four generations of the Carter family – John, Albert, Cecil, John and Norman, until it was sold in 1996. The original shop #3 was a grocery, butchers, paraffin and corn stores. Deliveries were made to all the surrounding villages, firstly with horse and cart and later with motor vans. In Carter’s at this time the counters went round the sides of the shop and assistants served the customer over this counter. The bill was paid at a small wooden kiosk just inside the door. The men all wore long white aprons and this continued until well into the 1950s. The Carter family lived over the shop; note the lace curtains in one of the upstairs windows. When John and Norman took over the shop they gradually enlarged the business, taking over #7 the shop next door in 1978, which had housed Jack O’Newbury’s cleaners. On the retirement of Mr Percy Taylor from his butcher’s shop in the Corn Market the premises were purchased by Carter’s who continued to run it as a butchers and slaughter house. The meat business moved back into the main shop and the premises extended at the back. The small building #5 in the middle was the office for the shop. Previously this had been a cafe run by Cyril Carter’s sisters, Phyllis Johnson and Kathleen Hogan. They eventually moved to the bakery in the Market Place (Lays) which became Hogan’s. Albert Carter is the man outside in the bowler hat. Young Cyril Carter was driving the delivery trap as, during the war, labour was scarce so he had to help out whenever he could.

In 1996 Carter’s was taken over by Budgens. Some years later a large Tesco supermarket was built at the top of Park Road, followed by an Aldi and Waitrose, with the result that Budgens eventually closed down in 2018. The premises has been empty since, except for #7, which was taken over by Costa Coffee. Plans are in progress in 2020 to convert all three buildings to domestic flats. 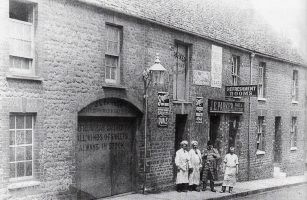 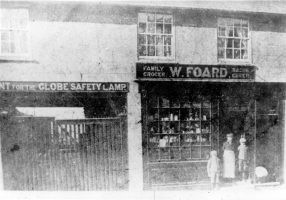 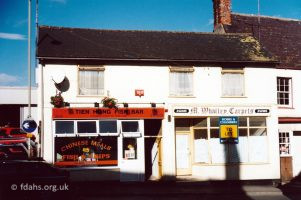 1902 & 1990s. Next to the garage on the corner with Gravel Walk at #30 was ‘Buffer’ Foard’s grocery shop. It later became E.T.Beavis (boots & shoe repair), Michael Bishop Watch Mender, then M.Whalley Carpets in the 90s. Now, it has been left unoccupied for many years. The gated entrance shown next door in the older photo that went through to back of shops became by 1977, as shown in the later photo, a shop occupied by Webb’s Taxis, Tien Hong Fish Bar, then Ming’s Takeaway. 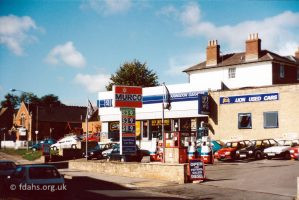 1990s. Fish Brothers’ Peugeot franchise at the end of Marlborough Street on the corner with Gravel Walk across which is the United Reform Church. Various businesses occupied this site in the past – Peek Freans (biscuits); Bernard Poole (garage); Anns Garage 1953; Pakemans (lorry garage). All the old buildings were demolished in 1948 when local man Mr. D.J. Fish built, what he then called the Faringdon Garage, which later became a Peugeot franchise. Fish Brothers now also have a Kia franchise in Swindon. 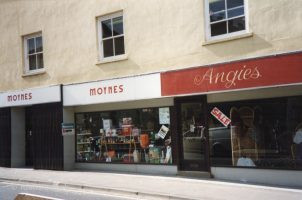 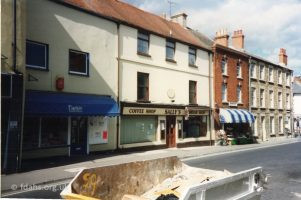