Fernham lies about 2½ miles south of Faringdon on a turning off Coxwell Road. Although the Fernham Road is now cut off for direct access by the A420 bypass. The manor of Fernham was in existence by the first half of the 13th century. The name derives from OE/Anglo-Saxon ‘Ferny hemmed-in land’. The 2001 Census recorded the parish’s population as 208. Today there are 79 houses, 3 farms, a pub and a church.

High Street in 1915, The first cottage is the village shop and Post Office run by David Brown. In front of the shop was Mrs Brighton, wife of the chauffeur at Ringdale Manor, with her children Ray, Bern and Sean. The building directly behind them was a coal and candle store. The owner would collect coal harnessed to a little handcart from Uffington Station. He would deliver ½ cwt of coal to anywhere in Faringdon at any time, day or night, for 2/6d. The next building is the barn belonging to the Woodman Inn, used by the local undertaker and wheelwright. Behind the barn is the Woodman Inn with stables, and some farm buildings belonging to a farmhouse which stood on the corner. The house in the distance was known as the Red House which was at one time a public house known as the Black Horse. It was the only house in Fernham with a cellar.

Early 1930s. The old Post Office, which was probably the old manor house with a beautiful staircase inside. In the background is Peach Tree Cottage. 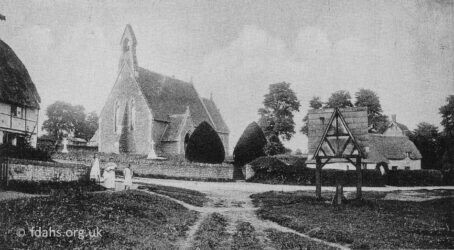 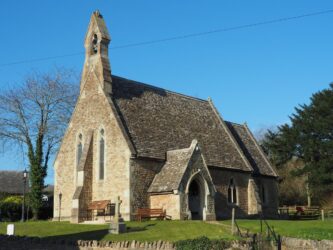 1910 & 2022. The old photo is of the village green in 1910 showing the village pump with the cover over the top. The cottage behind the pump is still there and behind that was the old village school which closed just before the First World War. St John’s Church was built by public subscription and opened in 1861 after the vicar of Longcot purchased some land in Fernham, with his own money, because he felt sorry for his parishioners having to walk all the way to St Mary’s in Longcot. (An alternative report3 states that it was constructed in 1868, and was a gift from a local landowner, Thomas Hughes.) Between 2004-2010, the building was converted into a combined village hall and church, with the help of lottery funding and other grants. 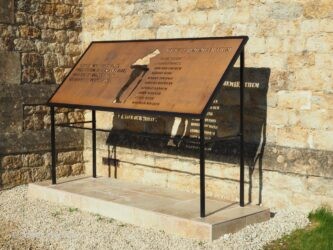 < 2022. The new locally designed war memorial placed outside the church. Unlike most English villages, there has never been a proper war memorial to the 10 villagers killed in the First World War – James Bailey, Albert Brown, Edward Church, Albert King, Harry Lovesey, Robert Richens, George Sansum, John Warner, Cyril Webb, and Wilfred Whales. The inscription on the left side reads “When you go home tell them of us, for your tomorrow we gave our today.” 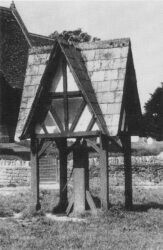 > 1920. The Village Pump on the green. It is an old lead pump with a wooden casing over a very old bottle well (a stone well shaped like a wine bottle). The well itself is about 12-15ft deep. The wife of the vicar of Longcot (the same one who had the church built) felt sorry for the women fetching water and so had a cover put over it. 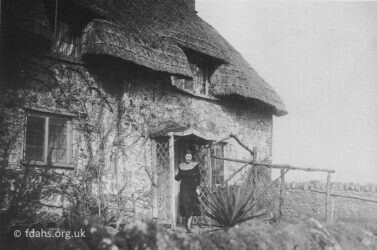 < 1930. The house called Thatchetts at the end of Church Lane with Nancy Warner standing in the doorway. She was the daughter of a seamstress who had a couple of apprentices and quite a thriving business. 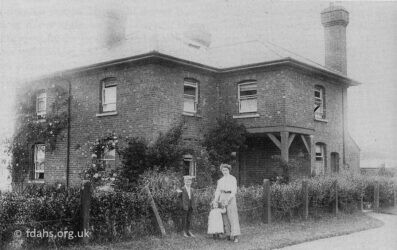 > Mrs Gilling, with Ray and Kitty (later Mrs Edward Green of Sands Farm), standing in front of Fernham Farm House in 1914. The original farmhouse, pulled down in the 1960s, was on the farm itself. These two cottages were converted into one for the farm manager when the farm was owned by a Swindon man. 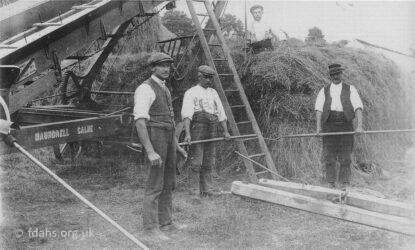 < c.1910 at Fernham Farm. On the hayrick is Sam Lawrence and those standing are, from left to right: the farm manager from Swindon; Billy Muggins; – Mildenhall. The Maundrell elevator was built in Calne. The shaft leading from the elevator goes to a horse gin, which is a primitive type of engine where gearing was fixed to the ground by the strike and a horse walked round and round and provided the motor power for the elevator to take the hay up onto the rick. 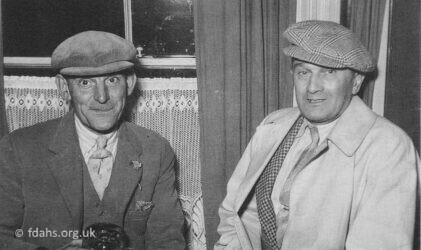 > 1960s. In the tap room of the Woodman Inn. On the left is Bill Dabney, a Fernham man, who worked at Manor Farm for George Adams. With him is Hector McFarling, from the Channel Islands, who worked as a groom for Mr Fieldgate, the local vet. He also worked for Mr Adams and ended his working life at Abingdon aerodrome. 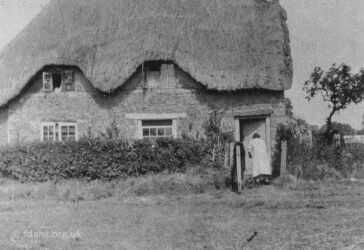 < Peach Cottage c.1925 with Mrs Seaford cleaning the doorstep, She lived there for many years and was mother of Lil Fuller. 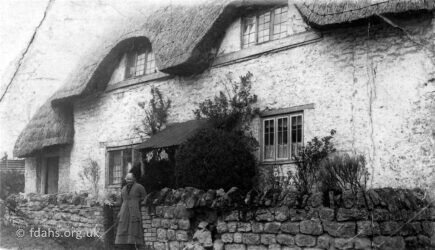