Coleshill is a village on the road to Highworth, situated on the top of the next hill after Badbury Hill and a little under 4 miles south-west from Faringdon. The 2011 Census recorded the parish’s population as 156. The village lies on the hill beside the River Cole, which drains into the Thames just below Lechlade. The village is part of the Buscot and Coleshill Estate, which totals some 7,500 acres comprising of 11 farms, 290 acres of in hand woodland, and 550 acres of woodland let to the Forestry Commission. The estate, including the villages of Buscot, Coleshill and Eaton Hastings is now almost entirely owned by the National Trust (only 4 houses are in private ownership), a total of 151 cottages. (Colleshylle c.950: OE/Latin collis ‘hill’; OE/Anglo-Saxon hyll ‘hill’; or maybe just a hill farm occupied by the Cole family.) 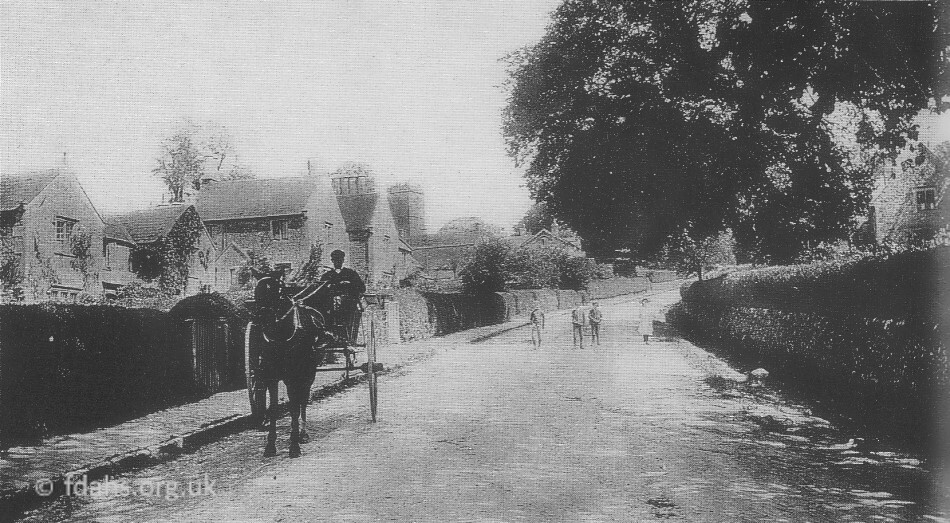 c.1910. Looking up through the village. The whole village at this time was owned by the Lord of the Manor, Lord Radnor, which meant that no alterations could go ahead without his permission and was known as a ‘closed’ village. Most of the cottages were built to house the estate workers – the photo below was taken in the estate yard near Coleshill House. 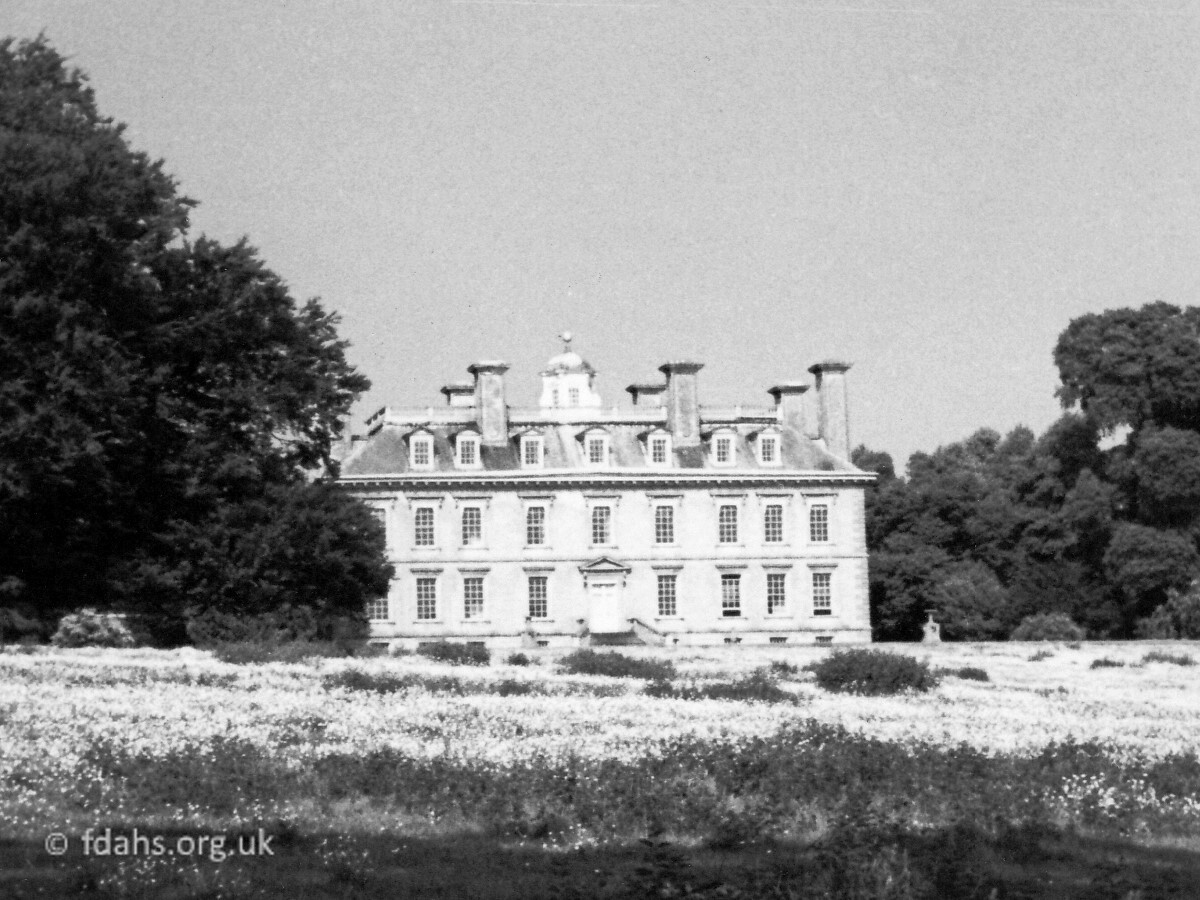 1952. Coleshill House was built between 1650-62 for Sir George Pratt (1598–1673), designed by one of Inigo Jones’ pupils, and built by Pratt’s cousin the architect Sir Roger Pratt. The house had 365 windows, one for every day of the year. The house was inherited by George’s sister and her marriage to Thomas Pleydell of Shrivenham brought the house into the Pleydell family. In 1748, their great-granddaughter married William Bouverie (1725-1776), the 1st Earl of Radnor. His son and successor, Jacob, the 2nd Earl (1750-1828), took the name of Pleydell-Bouverie. The village church contains many monuments, memorials, and other references to this long family dynasty. 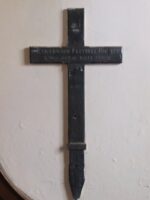 Inside the church is the first grave marker for Jacob Edward Pleydell-Bouverie (1887-1914) who was killed at the beginning  of the Great War WW1. He was mortally wounded during the German attack on Ypres and died in hospital at Boulogne in France. Apparently a member of the Coleshill House staff brought the cross home. He was named after his grandfather, the 4th Earl of Radnor, was educated at Eton and became Second Lieutenant in the King’s Royal Rifle Corps 4th Battalion.

During WWII, the house became famous for the role it played in the training of people in subversive roles against a likely invasion by the Germans. It was a top secret establishment set up on the orders of Winston Churchill, Many people came here in secret, meeting at Highworth Post Office before being sent on a circuitous route to get to the house. Recently, an operational bunker was excavated and can be visited to see the conditions in which the secret army was supposed to work. More about Churchill’s Secret Army…

The house was sold by the Playdell-Bouverie family in 1946, and bought by Ernest Cook, grandson of the travel agent Thomas Cook. It burnt down in 1952 and was completely demolished in 1958. Cook gave the estate to the National Trust. 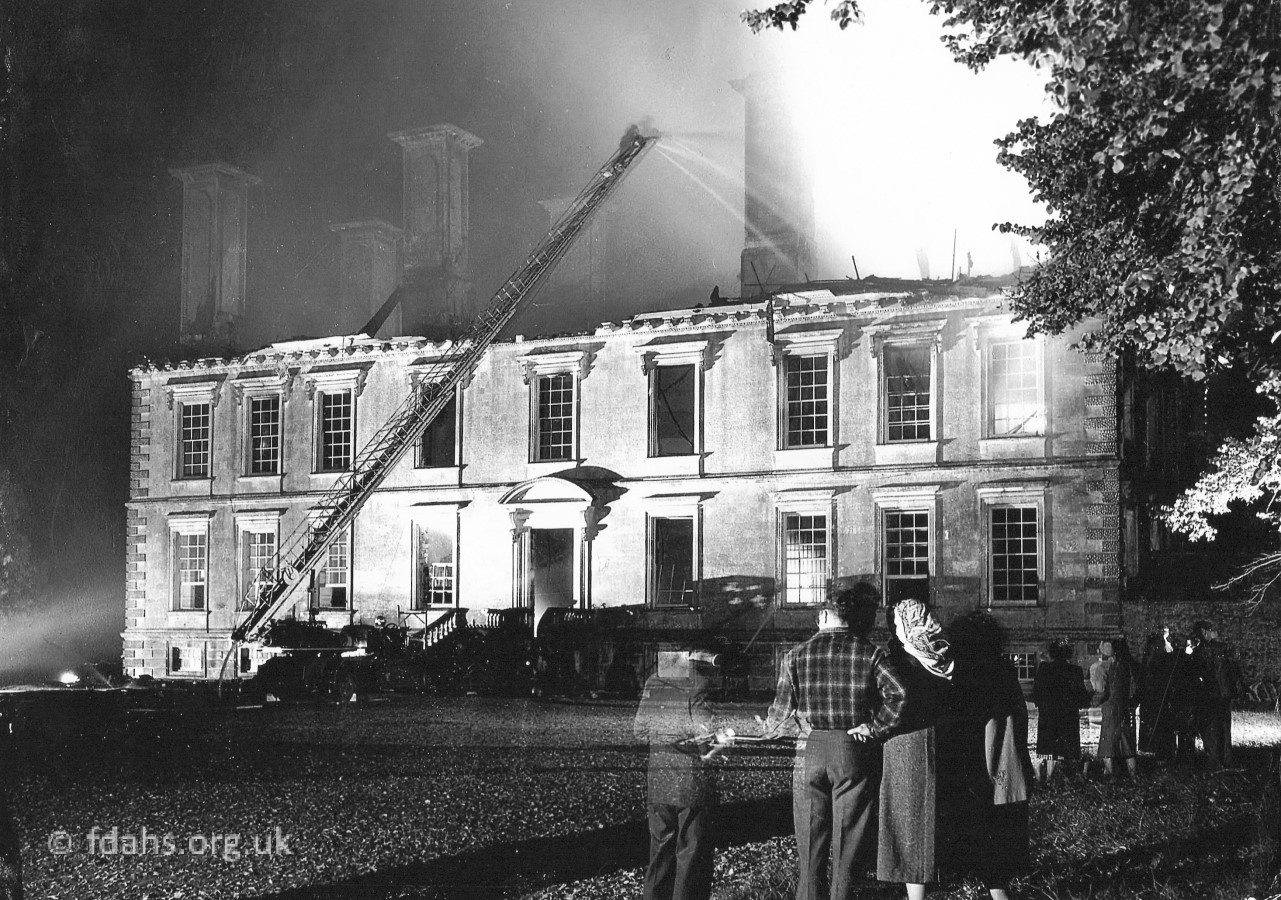 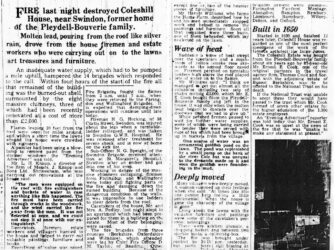 September 22nd 1952. Coleshill House on fire. The house had been handed over to the Ernest Cook Trust and was being completely re-decorated on the outside by a local firm of builders. A painter left a blow lamp burning on an attic window sill and went for his lunch; the lining of the window caught alight and set the house on fire. There was great difficulty in getting water to the fire, which had to be pumped a mile uphill from the river and it was completely destroyed. Luckily, however, most of the interior furnishings were saved by the efforts of the local people and firemen. The only injuries sustained were two firemen who were burnt when molten lead dripped off the roof. The last fireman to leave the building was Faringdon’s leading fireman, Sid Taylor. The picture shows a big turntable ladder at the top directing the hoses down into the centre of the building. The roof is completely gone and onlookers from the estate are just sadly looking at the remains of the house. Unfortunately the building wasn’t insured so it was demolished in 1958 and never rebuilt. I am told that the cellars survive and if you walk around Coleshill Park you can see the footprint where the house was, which is outlined by large bushes now. More… Faringdon Fighting Fires. 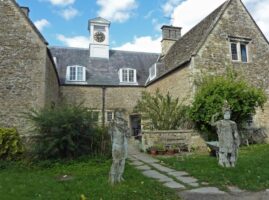 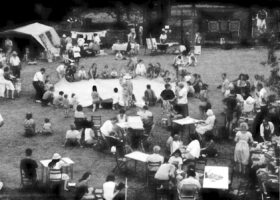 The Clock House and adjoining Stable Block, a Grade II Listed Building on the Coleshill Park estate. Originally built in the late 17th Century, the clock tower was added in 1830. The gate house and entrance to the park is on the left before reaching the village when travelling from Faringdon. The foundations of Coleshill House can be seen in the grounds close-by. Faringdon Peace Group, who have been active since 1981, normally hold their annual fete here. In 1993, it was held closer to Faringdon at Colleymore Farm. Among the special attractions that year was a novel series of ‘parachute games’ involving both children and adults in all kinds of enjoyably silly activities based around a colourful and voluminous parachute (see centre of photo). There was folk music from ‘The Last Straw’ and from the Wantage Wind Quintet, as well as children’s races and a fancy dress parade. Donkey rides were also popular, and drinks and ice creams did a roaring trade under the blazing sunshine.4 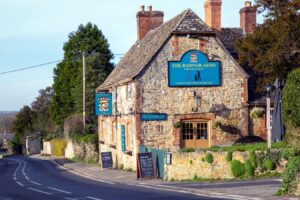