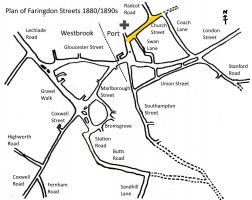 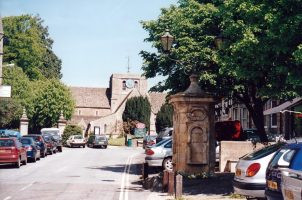 Church Street officially starts at the church and ends at the turning for Coach Lane. Street maps show it starting from the centre of town and heading towards the church (photo) as you would expect but that section has officially become a part of the Market Place. However, it is still sometimes referred to as Church Street or even Portwell, because it is on the Port (public) side of Faringdon and there is a well in the middle of the street. Church Street leads to the Radcot Road for access to the north. At the far end of Church Street, the road continues as Church Path or Church Walk to Church Path Farm; then as a public footpath past some more farmhouses and on to Littleworth and Buckland.

Views of the area in front of All Saints Church c.1900s: 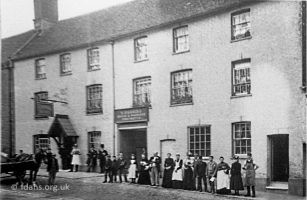 c.1880s. Salutation Hotel, Church Street. The building was built in 1869 on the site of a monks’ lodging house, which dated from when the Cistercian Order was given the Manor of Faringdon by King John in 1203. It is thought to be the site of a hunting lodge used by King Alfred the Great and his son Edward the Elder who succeeded him in 901. This was a coaching inn, the entrance visible in the middle of the picture. The coach and horses used to go through the entrance into a yard and then exit into the Market Place between the old houses that used to be on the corner. In the 1890s, the hotel was extended by taking over and rebuilding the old house on the corner that had been occupied by Mr R. Pettifer, the builder. The hotel required numerous staff to run it and here are some of them photographed with mein host. The landlord is dressed in a frock coat and his wife is next to him holding a dog in her arms. The left-hand side of the hotel was later a doctors’ surgery. 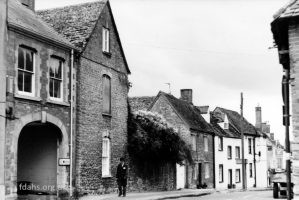 1953. Church Street #20-14 looking back towards town from the corner with Radcot Road. The corner of the converted old stables #3 can just be seen on right of photo. The archway on the left leads into the yard belonging to Mr Lister, a builder. The previous owners were Cadel’s the builders who were responsible for erecting much of the Marlborough Gardens Estate. Next to the archway is the gable end of #20, which was originally the Church Farm House. The  entrance to the front of the buildings (shown below) is the white gate in the garden wall further down. Next are #18 Tudor Cottage, #16 Mole Cottage, and past the telegraph pole is #14 whose entrance is around the far side of the building. 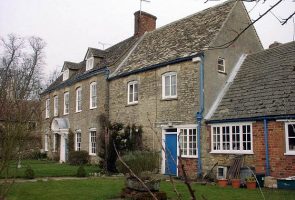 2000. Through the white gate in the garden wall shown above is the Church Farmhouse and Church Farm Cottage at #20. It was used as a school for 7-13 year olds from 1938-52. Known as Church Farm House School it was run by a very strict Miss Downs and a very musical Miss Sims. It was part boarding and part day pupils. One ex-pupil says it was boys only but other ex-pupils say it was mixed. There were dormitories at Church Farm House but also at Romney House (19 Gloucester Street). More… 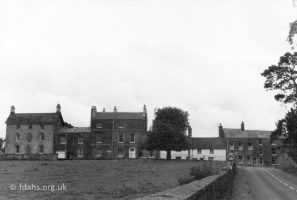 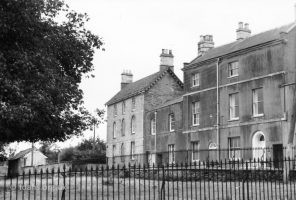 1982. The last houses on Church Street, #34-22 looking south from just down the hill on the Radcot Road. The tall brick building #34 on the left in both photos is Bleak House, once a cheese warehouse. Next door to Bleak House was originally the coach house and stable for the adjacent house #30 called The Grove. This building was built for and occupied by Mr Crowdy, solicitor, and later became Dr Pulling’s surgery. One of the rooms in The Grove had two large cupboards with iron doors (installed during the time of the solicitor’s practice for holding important and private documents. These cupboards were then used by Dr Pulling for his drugs and medicines. Susan Hampshire, the actress, stayed in the top flat for holidays as an infant. The second photo shows a closer view of #34-30 at the end of Church Street. Coach Lane turns off to the right at the corner of Bleak House, opposite the old fire engine shed. 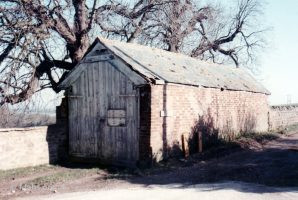 1985. The old Faringdon Fire Engine Shed at the end of Church Street on the junction with Church Path and Coach Lane. It has been there since before 1876. In 1903, the equipment was moved to its new home in the Market Hall, along with the town ambulance. The building, which is owned by Faringdon House Estate, was still there for this photo in 1985 and is still there now in 2021. The road now continues onwards, but under the name of Church Path. 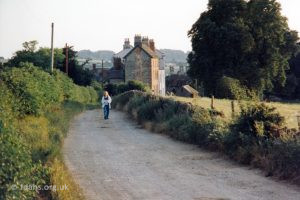 1994. On Church Path looking back towards Bleak House and the old Fire Engine Shed at the end of Church Street. The road continues behind to Church Path Farm then as a public footpath to Littleworth and Buckland. It was one of the old corpse roads used for bringing the dead to Faringdon for burial when there was no licensed ground in Littleworth.

The following shops and businesses were advertising as Church Street, Faringdon in the years stated: 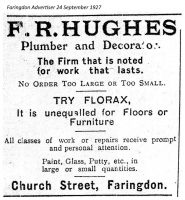