The Allotment Society was formed n 1920 leasing plots, next door to the Infants School in Canada Lane, from Lord Faringdon’s Buscot estate. Jack Bryan remembers that his father’s quarter-acre allotment was particularly fruitful in carrots which he used to sell to Dick Giles, at Littleworth, where they were apparently very much in demand as delicacies for local racehorses. About 1967/8 water was piped into the allotments for the first time by plumber Arthur Edgington. It made life rather easier for the allotment holders who, before that, had to carry buckets by hand from their homes or from the standpipe in Gravel Walk. Among the members of the Association have been: Sidney Spencer Swann, who was constantly guarding his prize marrows from predators; Bert ‘Bonny’ Townsend; Frankie Wright; Harry Adams; ‘Tich’ Hunt; Sid King; Gaylor Goddard; Jack Page; Bert Jackson; Tom Spinage; Jack Bryan. Presidents have included J. Spinage; Mr Beddingfield; Arnold Bird; Fred Hunt; D. Izzard; and Tom McCullough. The members have, on some occasions, shown their produce at the Faringdon Horticultural Society’s Annual Show. 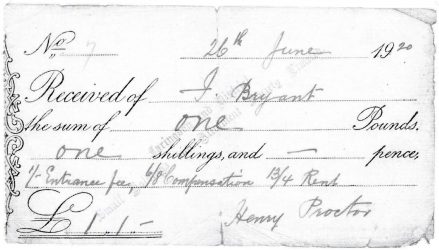 The receipt for one guinea’s annual fee paid by Jack Bryan’s father [J. Bryant on receipt] when the allotments in Lechlade Road were first established (13s 4d of the total was for rent, the rest for something described as ‘compensation’).