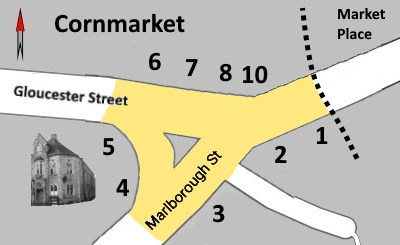 More photographs and information about the shops and other businesses in the Faringdon Corn Market. The photographs of premises shown here have been scanned in from the original photographs given to the Society over the years and stored in the Society’s archives. The numbers given for each property mentioned correspond as accurately as possible to the postal addresses and are shown on the above map. An occupational history of each premises, as far as is known, can be found on the ‘Shops & Businesses in the Corn Market‘ page. 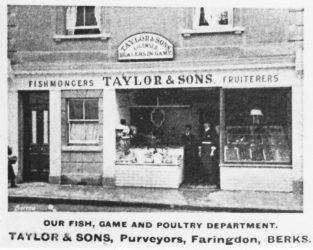 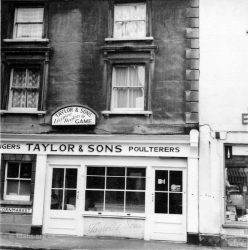 1910. #1 Taylor & Sons, a fishmonger’s shop in the Narrows at the beginning of Corn Market. (Mr Taylor also had a butcher’s shop & slaughter house at #6.) The sign over the shop was transferred from their previous premises in Marlborough Street when it was demolished in 1998 in order to build the Post Office. 1970s. The shop front has been glazed, but apart from this, the premises, including the marble slab used for displaying the fish, remained the same until 1999. The shop was owned by the Taylor family until1959 when it was sold to Mr Rogers. He later sold it on and it finally closed as a fishmonger’s in 1998. The brook that separated Westbrook from Port runs under this shop in a culvert and then goes under the road. Mr Taylor also had a butcher’s shop & slaughter house on the other side of the Corn Market opposite the Corn Exchange. 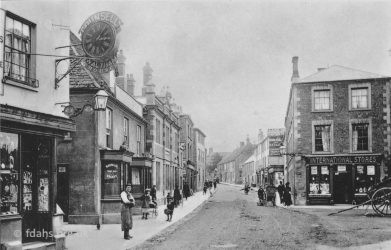 1890s. A view of a corner of the Corn Market and looking up Marlborough Street. The first shop on the left is #2 Mr Edwin Counsell’s shop and home, then known as Waltham House in honour of his being an agent for the American Waltham watches. He sold jewellery and spectacles as well as maintaining his watch and clock repair business. The large clock, with the works hidden in a cupboard by the side of the window, was made by one of his ancestors, The man standing at the entrance to Brewery Alley is George Pill, a brewery worker, wearing the sacking apron to protect his clothes. Next door is #3 the Red Lion public house. Mr Henry Godfrey was the landlord and also the proprietor of the Faringdon Brick & Tile works on the Stanford Road. Adjoining the Red Lion (and officially #1 Marlborough Street) is Faringdon’s new Post Office, which for some years had been run from a house opposite the Portwell Pump in the Market Place. On the opposite side of the road is Mr Westall’s bakery delivery cart with the roundsman standing by. Lane Bros.’s sign over their premises, just up Marlborough Street on the right, dominates the skyline. They dealt in almost everything. At one time they had an advertising slogan ‘anything from a pin to an elephant supplied’. Beneath these signs the protruding shop window belonged to Goulding Goddard’s, another outfitter’s shop. On the right is the International Tea Co. shop with a farmer’s trap parked outside. 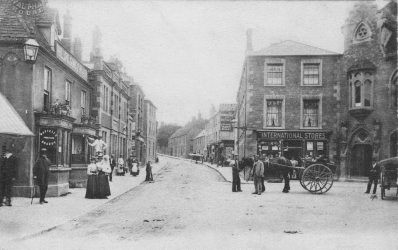 1916. On the left is #3 the Red Lion. The Post Office next, followed by Carter’s grocery store are addressed as being on Marlborough Street. The International Stores #4 faces the Corn Market. The Corn Exchange #5 can be seen on the right and was originally used for the sale local produce. Later it was used as a cinema and nowadays for a variety of functions. In 1997 a licence was granted to enable marriages to be performed there. 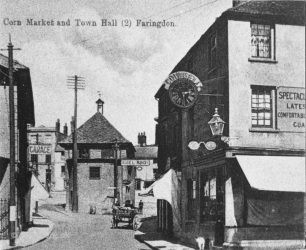 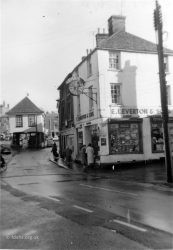 c1910s. Left photo – Looking back towards the Market Place. On the right with the awning is #1 Taylor & Sons (fishmongers & fruiterers) . #2 on the corner with the clock and gas lamp is Counsell Jewellers established in the 1890s (? 1840s) . On the left can be seen Anns’ Garage, which moved there in 1910 and which is addressed as #22 Market Place. The first town jail can be seen in front of the Market Hall in the centre. The right photo shows the same but a later scene from the 1970s. 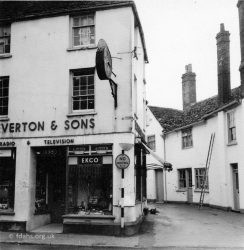 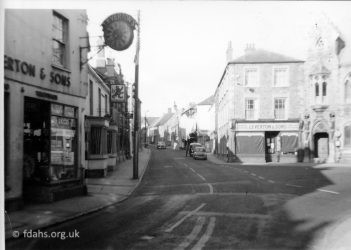 c1970. E. Leverton & Sons (radio & TV service)  occupied #2 from 1952 until the 1970s when it became Larkin’s (electrical shop). The Leverton family also owned an outfitters and furniture shop at #4 on the other side of the Corn Market next to the Corn Exchange. Next to the shop between the shop and the Red Lion is Brewery Passage. 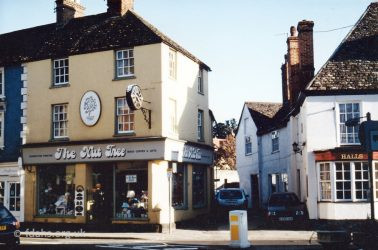 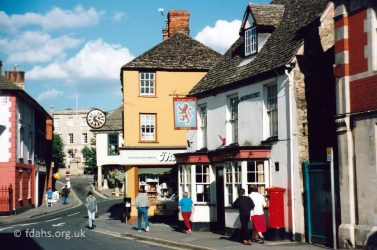 c2000. After Larkin’s, #2 became The Nut Tree from at least the 1980s to 2015. In 2017 Waymark Estate Agents took it over. Back in the mid 1800s and well into the next century, it was Counsell Jewellers. The road dead ahead between The Nut Tree and #3 The Red Lion is called Brewery Passage, now leading to the town car park. In 1863, it lead to a brewery called the Vale of the White Horse Brewery, which changed its name in 1876 to the Eagle Brewery.. The Red Lion is possibly the oldest pub in Faringdon. It started trading in the 14th Century and became a famous coaching inn with extensive stabling. The second photo, looking towards the Market Place clearly shows how the road becomes quite reduced in width and has come to be referred to as ‘The Narrows’. It is also the lowest point in the town and is where the old brook passes under the road. 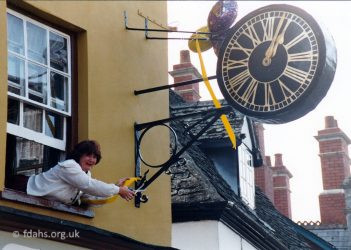 1995. The very old street clock on the wall of #2 The Nut Tree, a prominent feature in many photographs of the town, was made by a Mr Counsell back in the 1840s when he established his jewellery shop here. It was restored in 1995 back to working condition after many years of disuse. In this photo the restored clock is being ‘restarted’ by the Mayor, Margaret Broughton. 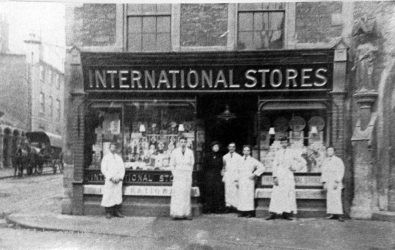 1911. A closer look at #4 the International Stores which was next to the Corn Exchange. The shop that had been there since at least 1871 was moved in the 1920’s(?) to the Narrows, at #21 Market Place, next to the present newspaper shop.

From the end of the 19th to mid 20th century, Faringdon had many more grocer’s shops than at present, and this large national combine, its full title being ‘The International Tea Company Stores Ltd.’, thought it worthwhile to have a branch shop in the town. To the people of Faringdon and district it was more commonly known as ‘The Internash’. Read more… Faringdon Folly, May1990 – Let’s dash down to the ‘lnternash’ 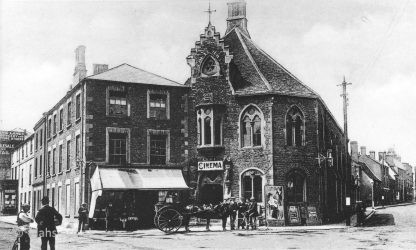 1920s. #4 The International Tea Co. shop has the sun blind down to protect the goods in their window display. The Corn Exchange, built in 1863, has finished as a farmers’ dealing centre and at this time was Faringdon’s first cinema with the best seats in the house costing 3d (just over 1p). The auctioneer’s gallery was commonly called ‘the cuddly corner’ as it was frequented by the young couples, these seats cost 6d (2.5p). The gallery also held the store of rat-infested grain sacks, much to the detriment of any budding romance. Saturday morning sessions were also held at the cinema when youngsters could get in, to see such films as the Pearl White thrillers, for the price of 2d. 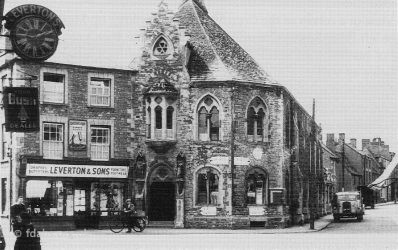 1953. #4 The International Tea Co. shop has given way to E. Leverton & Sons, outfitters and furniture shop. The Leverton family also owned Mr Counsell’s shop on the other side of the Corn Market, which was run by Mr David Leverton. Note the advertising sign for Bush radios and the one between the windows advertising Wellington Boots. The Corn Exchange is now being fully used as a public hall for dances, dinners and meetings. Bridge Turf Accountants was run by Mr F. Bowerman from an office at the front. The plaque commemorates Queen Elizabeth II’s Coronation in 1952. 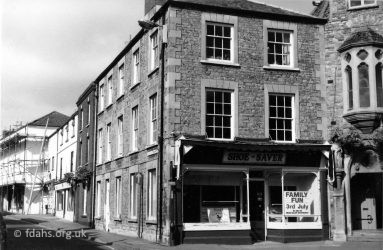 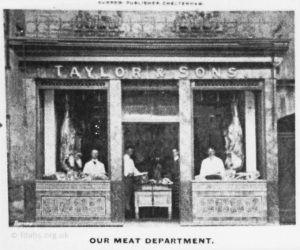 1910. Crossing over to the other side of Gloucester Street is #6 Taylor & Sons, a butcher’s shop & slaughter house. The shop was between the Volunteer Inn and what is now the opticians #7 in Corn Market. It was sold to Carter’s in 1959 (see below) and remained a butcher’s until 1987. 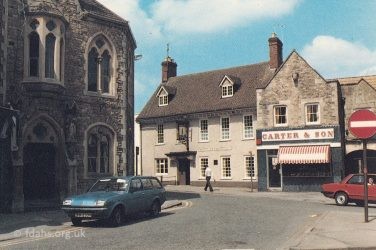 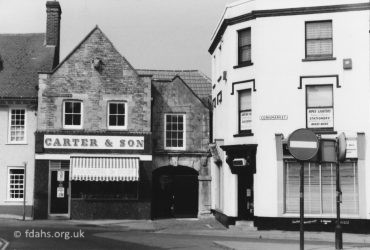 1980s. The Corn Exchange is on the left, The Volunteer pub is across the road in Gloucester Street, then #6 is now Carter & Son but still a butcher and slaughter house. Note the carved stone bull’s head on the gable end. #7 on the right at this time was White Bros (more below). 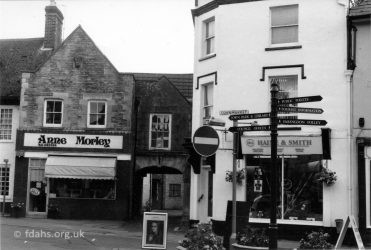 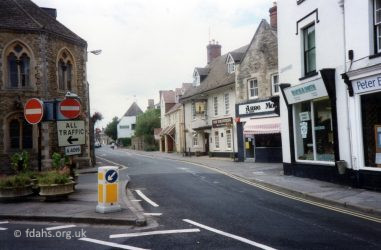 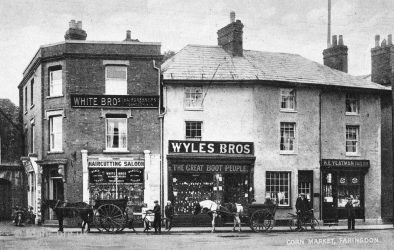 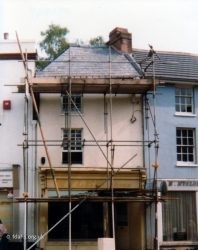 Early 1930s. #7-10. On the left is #7 White Bros. Mr George White was first recorded in London St in 1844 and then in 1854 in Gloucester St and he was listed as a hair cutter and perfumer. At this time it is two brothers doing the hairdressing but there is also a ladies hairdressing salon on the first floor. Next is #8 Wyles Bros. boot and shoe shop; they were one of the oldest continuous businesses in Faringdon for some time. This shop was first recorded as the Leeds & Leicester Shoe Company and later they changed their name to Wyle’s and finally closed in the 1970s. The building was renovated in 1982 (pink house in 2nd photo) possibly when it became Peter Edwards & Co who were Chartered Accountants. Next is #9 a little private house, then comes #10 H.E. Yeatman’s, which used to advertise as a breeches maker, outfitter and tailor and was first recorded in 1895. One of the traps in front of the buildings is Mr Viner’s from Smokedown Farm who is in town shopping with his wife. The 2nd photo from 1982 shows #8 being renovated and #9 with the blue wall has at some time been converted into a shop, here owned by Hyslop Optician. 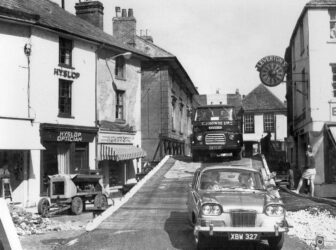 1963. On the left is #9 Hyslop Optician and with the awning is #10 Henry’s bakery. The Bailey Bridge (more) was erected in ‘The Narrows’ while repairs were being made in the road underneath. 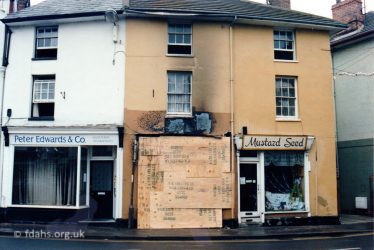 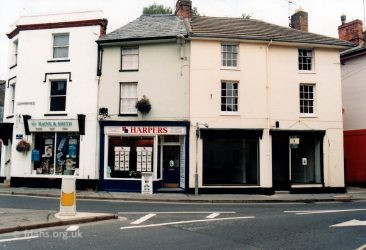 1992, 1993 & 1994. #7-10 again.These shops have seen many changes since the 1930’s. #7 White Bros.became Haine & Smith (optician) by at least 1987, #8 Peter Edwards & Co were Chartered Accountants and got taken over in 1994 by Harpers Estate Agents. #9-10 previously Hyslop Opticians and Henry’s bakery was a dress shop and the Mustard Seed at this time. Unfortunately it got burnt out in March of 1993 so the Mustard Seed moved across to the opposite side of ‘The Narrows’ at #19 Market Place where it is today. The renovated and combined premises remained empty the following year then in 1995 became a dress and needlework shop, then a butchers for a few years but is now Istanbul Barbers.

This article published in the Faringdon Folly in January 1992 mentions an earlier fire at the end of 1991 but possibly identifies the ‘dress shop’ mentioned above at #9 as Jobee’s Boutique. The boutique placed an advert with no address in a programme for the local theatre in 1987 but it could have been somewhere else in the town then as Hyslops (optician) was here until 1982. An alternative site for the boutique (and this fire) would be across the road at #1, the old Taylor & Sons (fishmongers & fruiterers), which is also over the old brook and prone to flooding but there has been no mention found of a dress shop having been there. 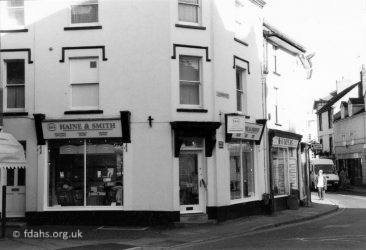 1995. #7-8 again looking into ‘The Narrows’ towards the Market Place. #7 Haine & Smith (optician), #8 Peter Edwards Chartered Accountants became Harpers Estate Agent at this time. By 2014 it had been taken over by Faringdon Cobblers but they moved to 10a Marlborough Street in 2019 and it became empty. 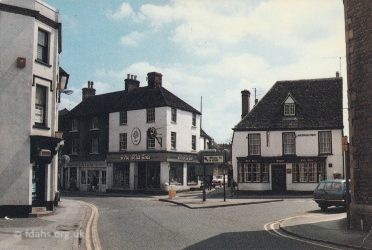 1984. #7 on the left is White Bros (hairdressers & tobacconists), #1 across the road is what was Taylor & Sons (fishmongers & fruiterers) possibly a clothes shop at this time, #2 The Nut Tree and #3 The Red Lion.