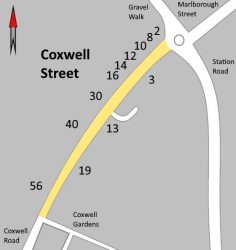 A historical record of shops and other businesses in Coxwell Street. There were once 7 shops and 4 public houses on this short street; now only 2 shops remain and no pubs. Coxwell Street becomes Coxwell Road at No 56 Coxwell Street, now a private home it was once the Eagle public house. It is easy to recognise as there follows a gap in the buildings here on both sides of the road.

The photographs below were taken in the year 2000 by a group of local residents. Beneath each on is a simple historical list of known occupants up to the present time and the rough dates they were last known to be at the property. The number given for each property corresponds as accurately as possible to the postal address and is shown on the map.

There is also a ‘Coxwell Street & Road Views‘ page that contains general information about the street and may contain further details on the premises shown in the photographs. Burtwell & Drew, the electrical goods shop at 19 Coxwell Street has its own page.

Coxwell Street – even numbers – heading back north-east towards the roundabout: