Uffington lies about 5 miles south of Faringdon beyond the village of Fernham. An old Anglo-Saxon village whose name with its current spelling appears to date from c.955 – Uffa ‘personal name’; inga ‘people of’; tūn ‘enclosure, farmstead, village, estate’. It is written as Offentone in the Domesday Book 1086 and has had various spellings since.

The 2011 Census recorded the parish’s population as 783. The village has become famous for three things – the book ‘Tom Brown’s Schooldays‘, the ancient ‘White Horse‘ carved out on the nearby Berkshire Downs, and ‘Uffington Castle‘ an early Iron Age fort. 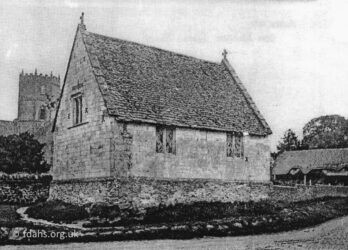 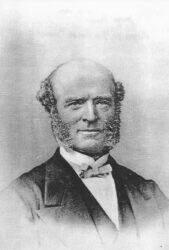 Tom Brown’s School in the early 1880s was a village reading room at that time. It was originally the village school, founded on the corner of Fernham Road and Broad Street in 1617. Since 1984 it has become the village museum with exhibits on the history and archaeology of the area. Notably there is a collection of 137 editions of the well-known book “Tom Brown’s Schooldays”, written by Thomas Hughes who was born in Uffington in 1822. 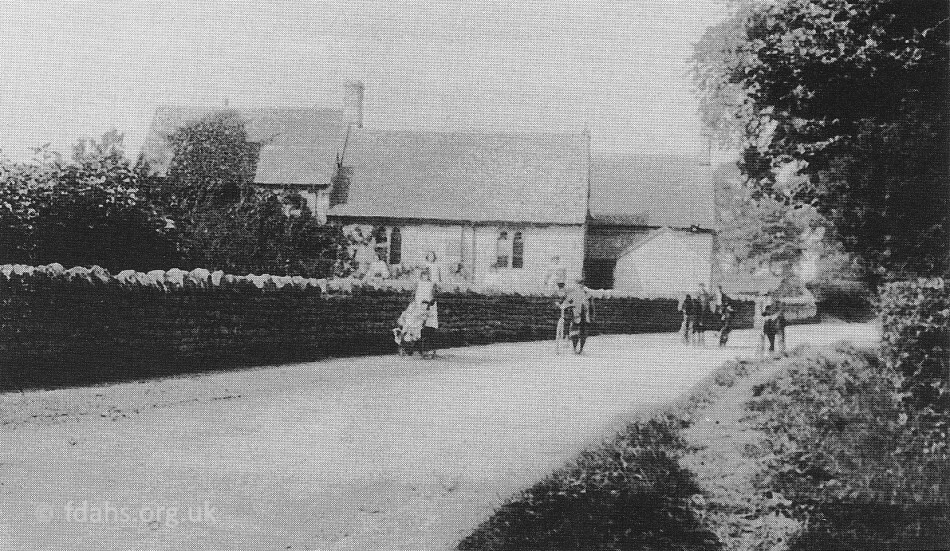 Broad Street in the 1920s or 1930s showing the new school with the schoolmaster’s house attached. 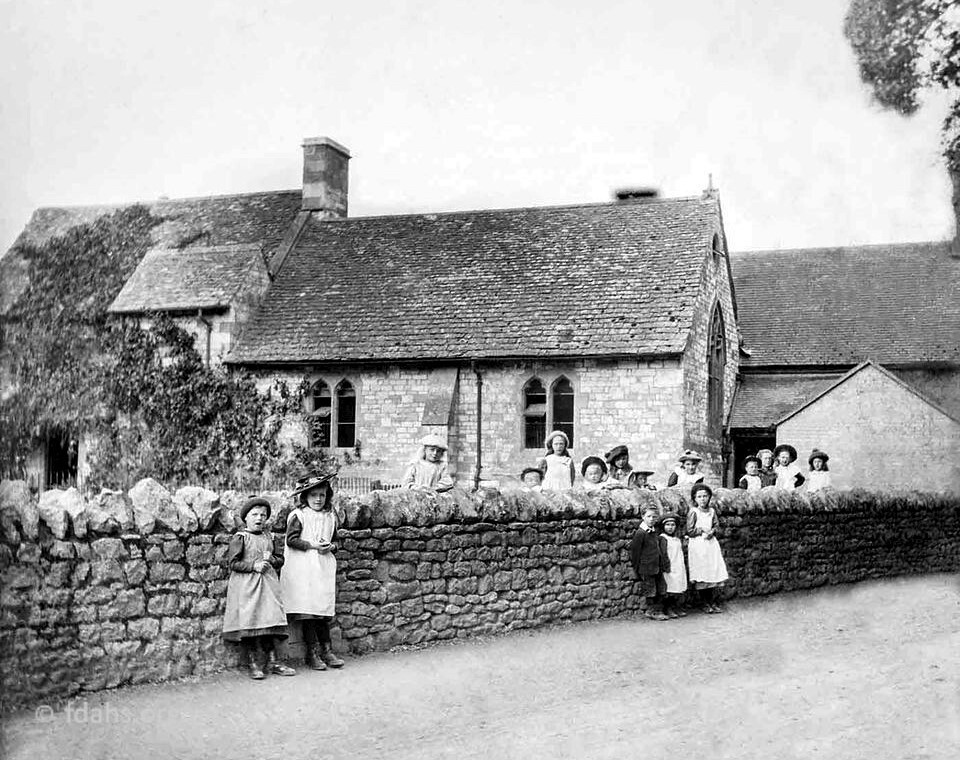 c1920s Uffington School in Broad Street, shown in the previous photo. It is the Church of England Primary School and still there today. The end building used to be the toilets with a wooden bench with buckets underneath. 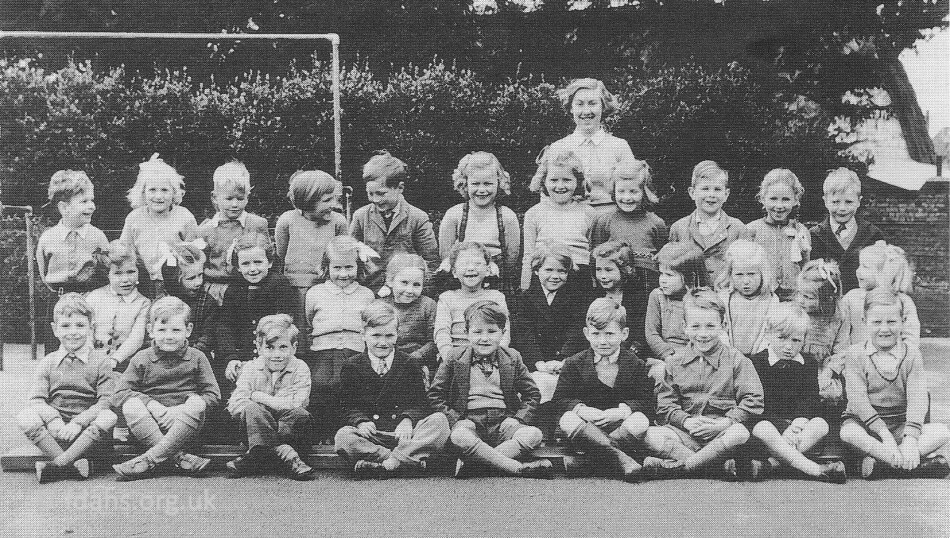 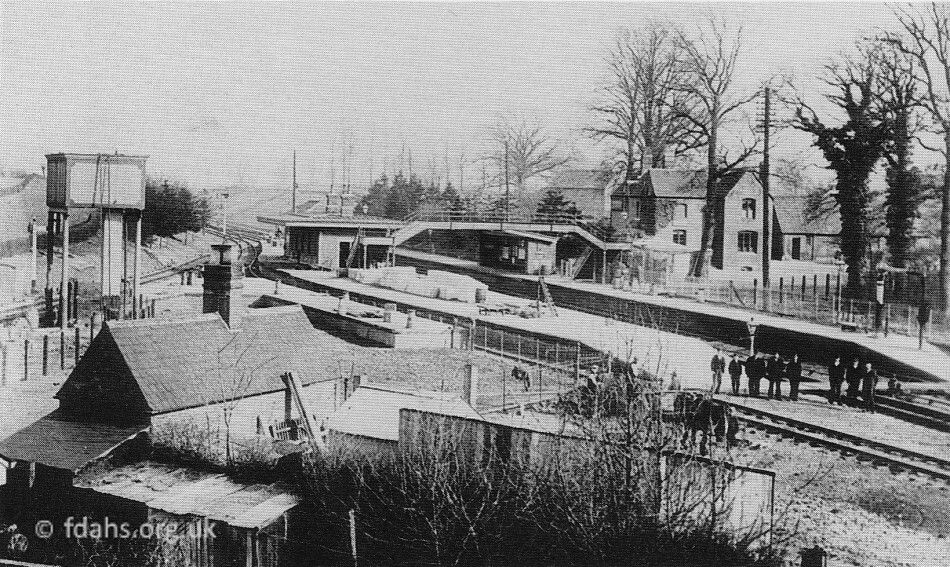 Uffington Station c.1897. The single track branch line to Faringdon is on the left. The photographer is standing on the bridge looking down onto the workshop buildings. Water was piped, under the Faringdon track, from a spring on Ringdale Hill to the tower on the left. The Junction Hotel is on the right in the background. The staff are lined up on the crossing between the ‘up’ and ‘down’ platforms. 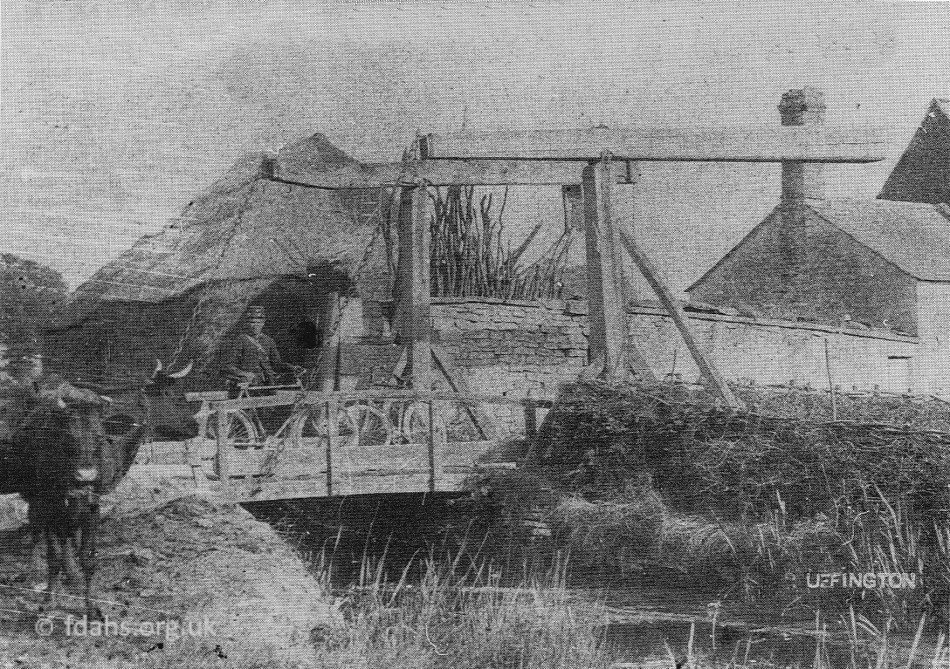 Uffington Wharf c.l907. The bridge over the Wilts and Berks Canal on the Fernham/Uffington road. A postman with a bicycle is standing on the bridge. The photographer is on the Fernham bank. In the event of a barge wishing to pass along the canal, the bridge was lifted by beams which were counter-weighted so that it would stay in the upright position. If anyone, coming along from the Fernham direction, wished to cross the bridge and it was still upright, there was a long pole with a hook on the end which was hooked onto a ring at the end of the bridge and the person heaved the bridge down. The building in the background was called Wharf Farm and was occupied by Mr Jenkins. He was a haulier with a team of white horses and worked for the Astor Estate. Mr Jenkins also ran a small farm. He was the last man to have a barge at Uffington, using it for hauling coal from Swindon to Wantage on the small section of the canal that was still in use. The barge was last used to transport hay to the farm. It was then left to rot in the water and its remains are still in the base of the canal which has now been filled in and a modern bungalow built on top. The canal was out of use by 1914. 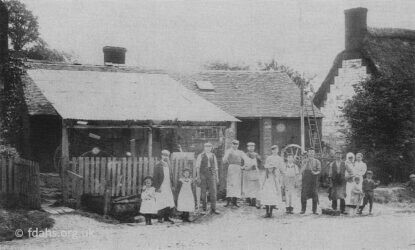 Uffington Forge. The Packer family, wheelwright and blacksmith, and staff in the High Street in front of the forge. The baby being carried was Queenie Weaver who became the cook at Uffington School. 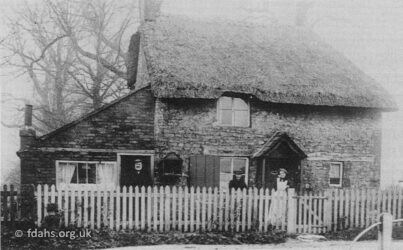 Westminster Bridge Cottage on Woolstone Road. The owners also had a small paddock across the road in which they raised pigs and hens. 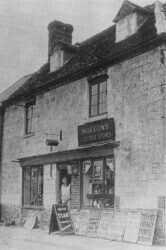 General Store and Post Office 1939. Mr and Mrs Pike’s daughter, Mrs Norton, standing in the doorway of her shop. She was the second generation of the family to own the shop (see the previous picture). The billboards outside are all concerned with the events leading up to the Second World War. 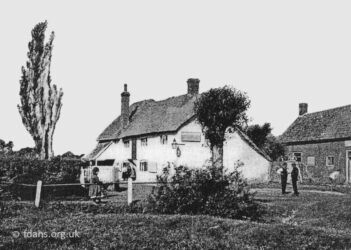 Craven Arms early 1880s. Situated on Fernham Road, it is now a Grade II Listed Building and used as a private house. 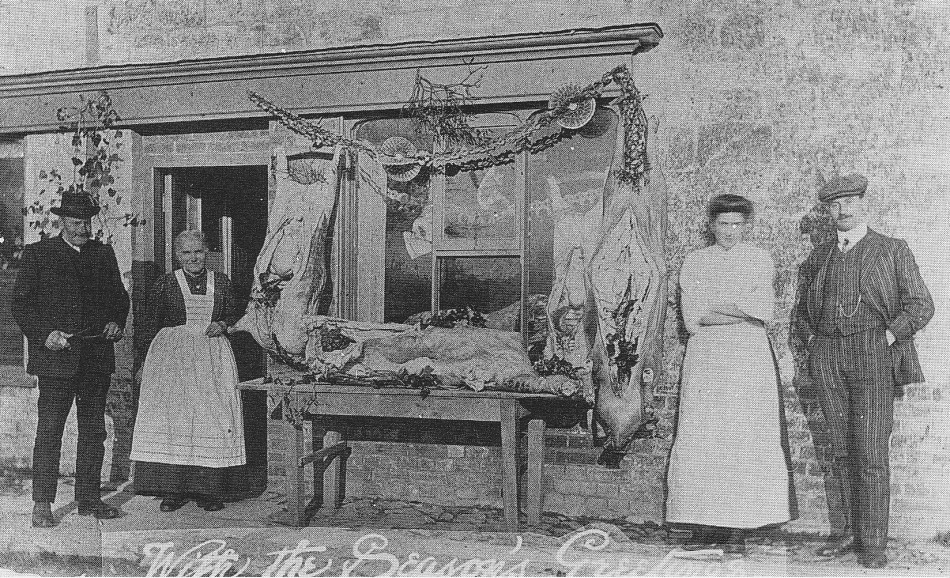 Butcher’s Shop. On the left are Mr James Pike and his wife Susannah standing outside their butcher’s shop. They had arrived from somewhere in the Midlands early in the 20th century. On the right are their daughter and son-in-law, Mr and Mrs Norton. 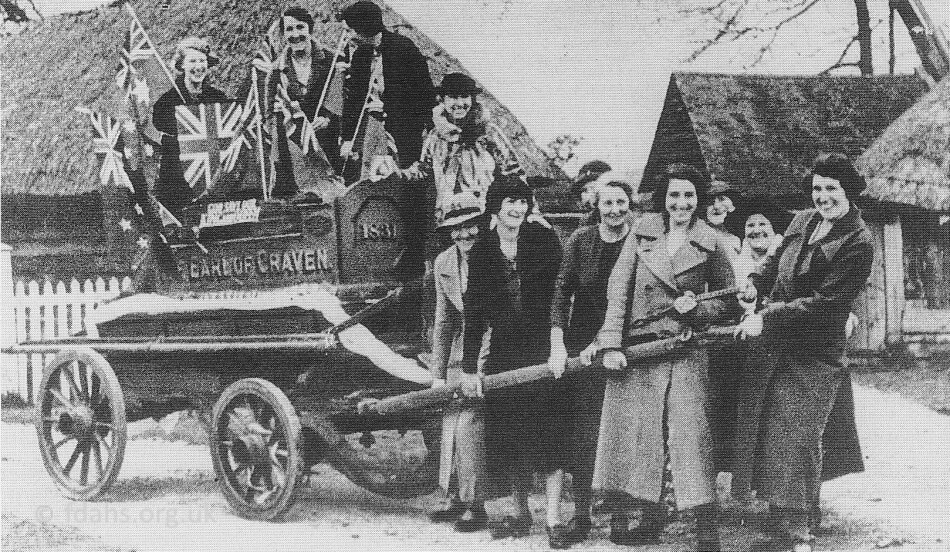 1937 Coronation Celebrations. The Craven Estate fire engine, which was kept in Uffington. A popular story in the village was that if you were single and had a ride on the fire engine you would be married within the year. The engine is preserved and kept at Newbury Museum. Left to right: Joyce Bowley; Mrs Queenie Weaver; Ettie Lewer; ?; ?; ?; ?; Mrs Dainty snr; Mrs George Weaver;?;?; Mrs Susan Packer. 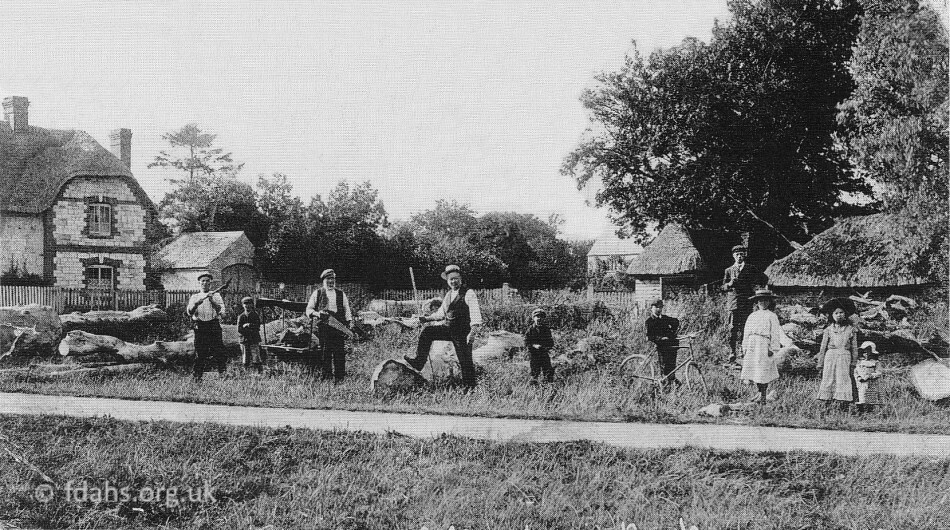 1890s. The Craven Estate timber yard, now known as ‘The Green’. The cottage on the left was the home of Mr and Mrs Dainty. He was an estate carpenter and wheelwright and strangely for a man of quite manual labour, also the village watch and clock mender. Later, moving with the times, he repaired gramophones as well. The small building next door housed the estate fire engine – a horse-drawn manual pump, which was a welcome insurance when so many of the village houses had a wealth of timber and thatch in their construction. Modem houses now stand on the edge of the green.3

In the timber yard is a selection of tree trunks or ‘sticks’ as they were known. These would have been of oak, ash or elm. All the sawing was done by hand over a saw-pit. The sawyer stood on top of the log and guided the saw to the trunk line, while the labourer stood in the pit and pulled the saw down, getting covered in sawdust. The head of the yard, Mr Edmund Bailey is the man in the straw boater standing in the centre with his foot on a log and holding the measuring rod. 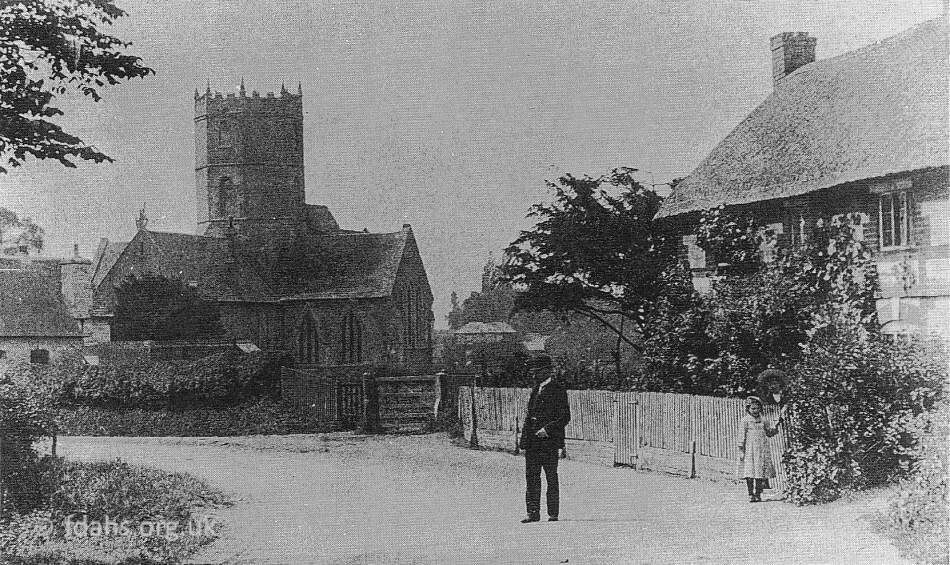 Broad Street pre-1907. The man is Mr Kosser who ran the Post Office and Village Store and was also the local postman. He was of German extraction and at the outbreak of the First World War, when there was a great deal of anti-German feeling, he changed the spelling of his name to Cosser. 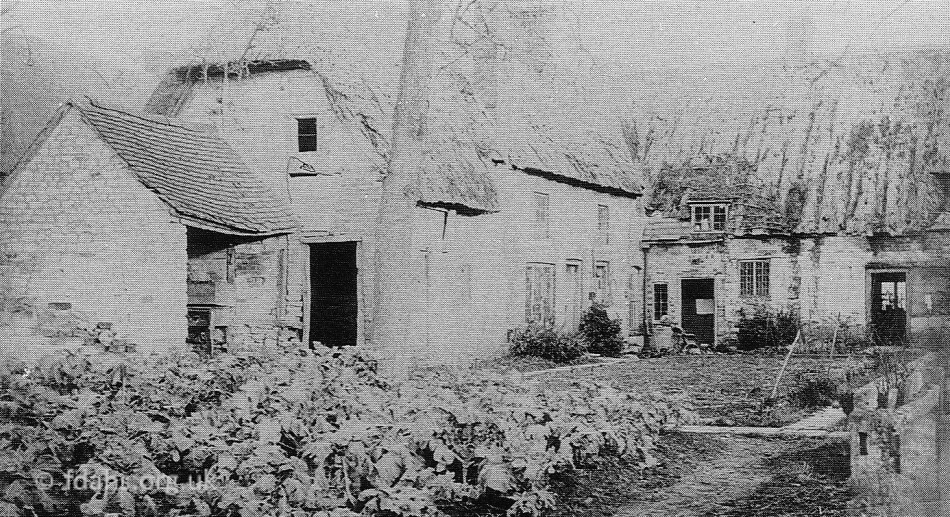 Baker’s Arms. The rear of the Baker’s Arms taken from the lane leading to the church. It is thought to be the birthplace of John Hughes, forebear of Thomas Hughes of Tom Brown’s Schooldays fame. 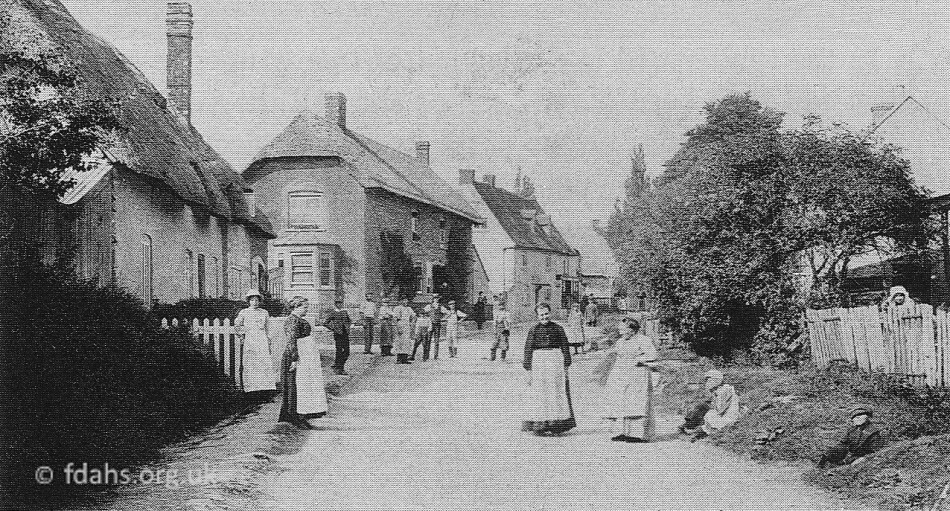 The High Street before 1906, looking down into the centre of the village. A crowd of people in front of Packers, the builders, on the left-hand side. The lady in the black dress with the white apron standing in the centre of the road is ‘Granny’ Maria Packford. 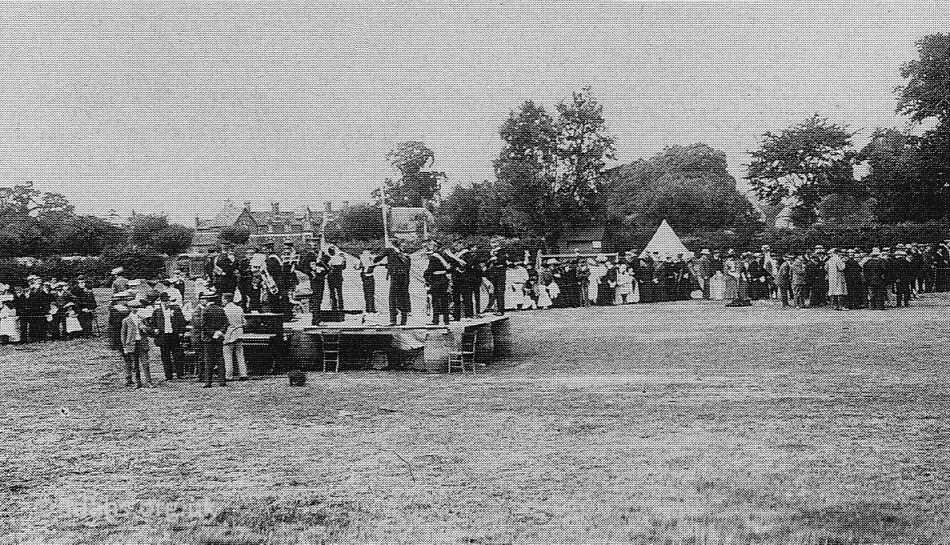 A Conservative Fete held in the early 1900s on the field where the new village hall now stands. The Kingston Lisle Brass Band is on the raised dais in the centre. 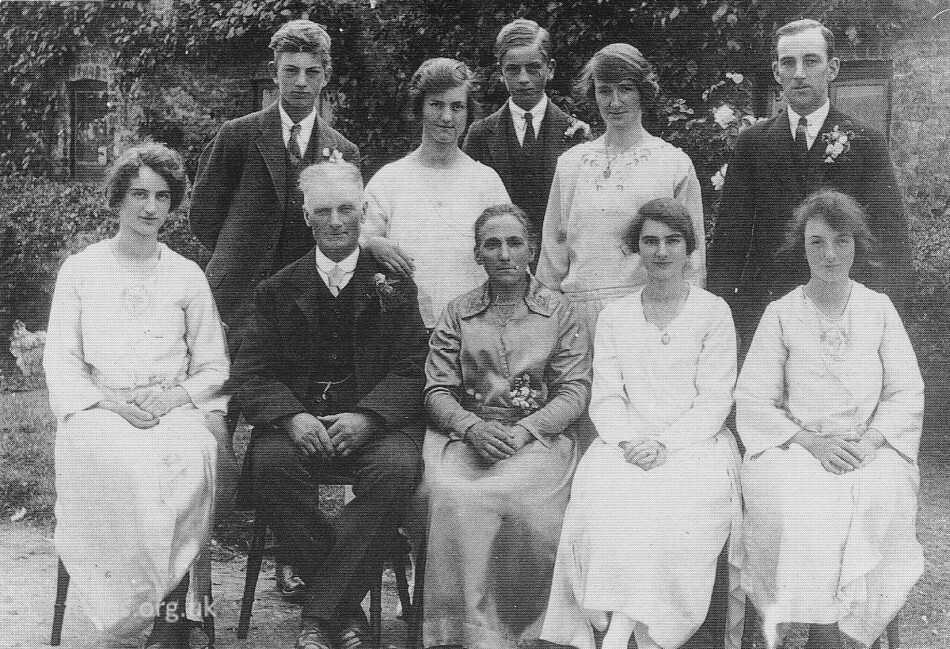 The Mildenhall family who lived on the Fawler road and were small farmers. Albert James Mildenhall and his wife Elizabeth had five sons (Herbert, Arthur, Albert who died in infancy, Albert, Wilfred) and four daughters (Margaret, Rosa, Dora, Florence). The eldest son rose through the ranks in the army to become an officer and was one of the first men to drive the new tanks in the First World War. 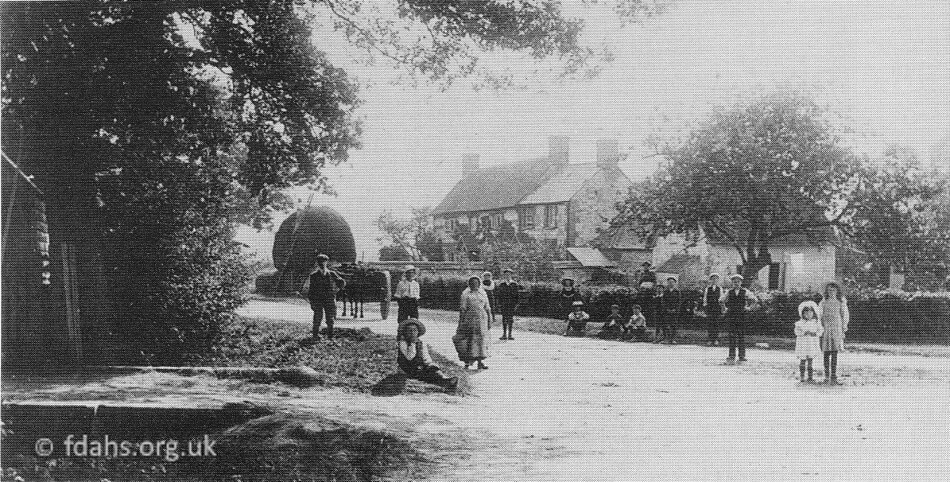 Shotover Corner c.1915. The photographer was standing in the High Street, looking towards the road leading to the White Horse Hill. The cottages in the background are now known as Shotover House. There have been very few changes in the view since this was taken. 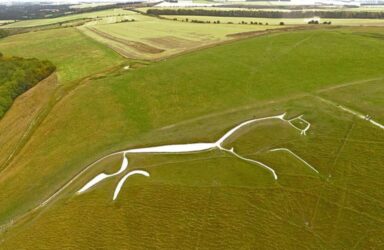 Uffington White Horse. The village sees thousands of visitors a year passing by on their way to look at the country’s most famous Bronze Age White Horse carved in the turf of the Berkshire Downs about 2 miles to the south of the village. It is by far the oldest of the white horse figures in Britain, an estimated 3000 years old. There are many speculations as to why it was carved on the top of the hill where it can only best be seen from above. Some say it is not a horse but a dragon, indeed the road leading up to it is called ‘Dragon Hill Road’, named after the small but very distinct hill below it. Up until the late 19th century, the horse was scoured every seven years by local people as part of a rural festival sponsored by the lord of the manor. The site is now owned and managed by the National Trust and is a scheduled monument. 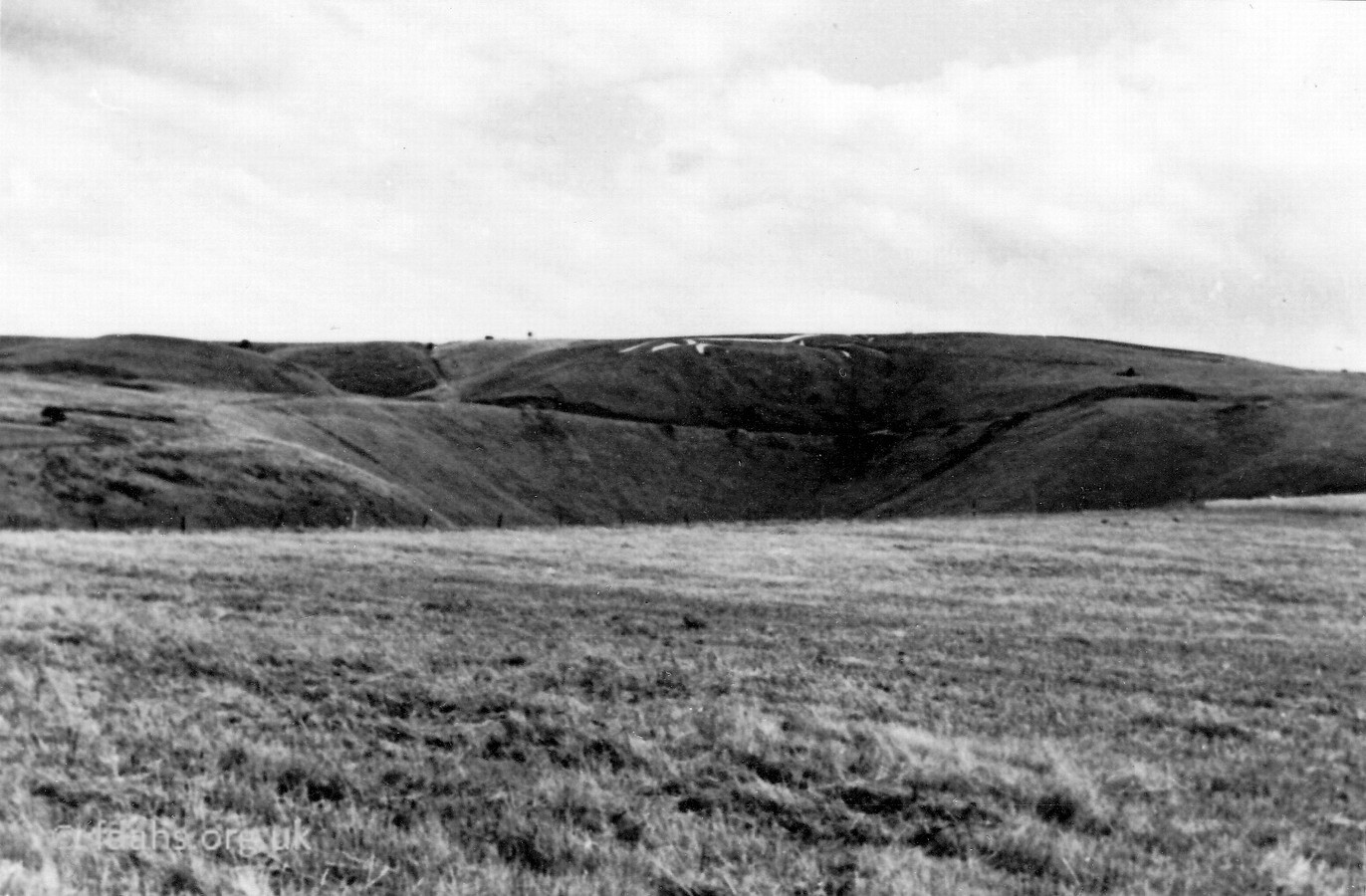 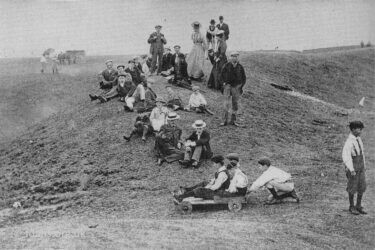 Uffington Castle on an August Monday in the 1890s. The people were brought up the hill by the horse-drawn vehicles in the background. Note the children playing with a cart in the foreground. Uffington Hill was the usual destination for outings at this time. Uffington Castle was an early Iron Age fort located on the top of the hill above the White Horse and later occupied by the Romans. What remains today is a very large flat area that is surrounded by two high earth banks separated by a deep ditch. 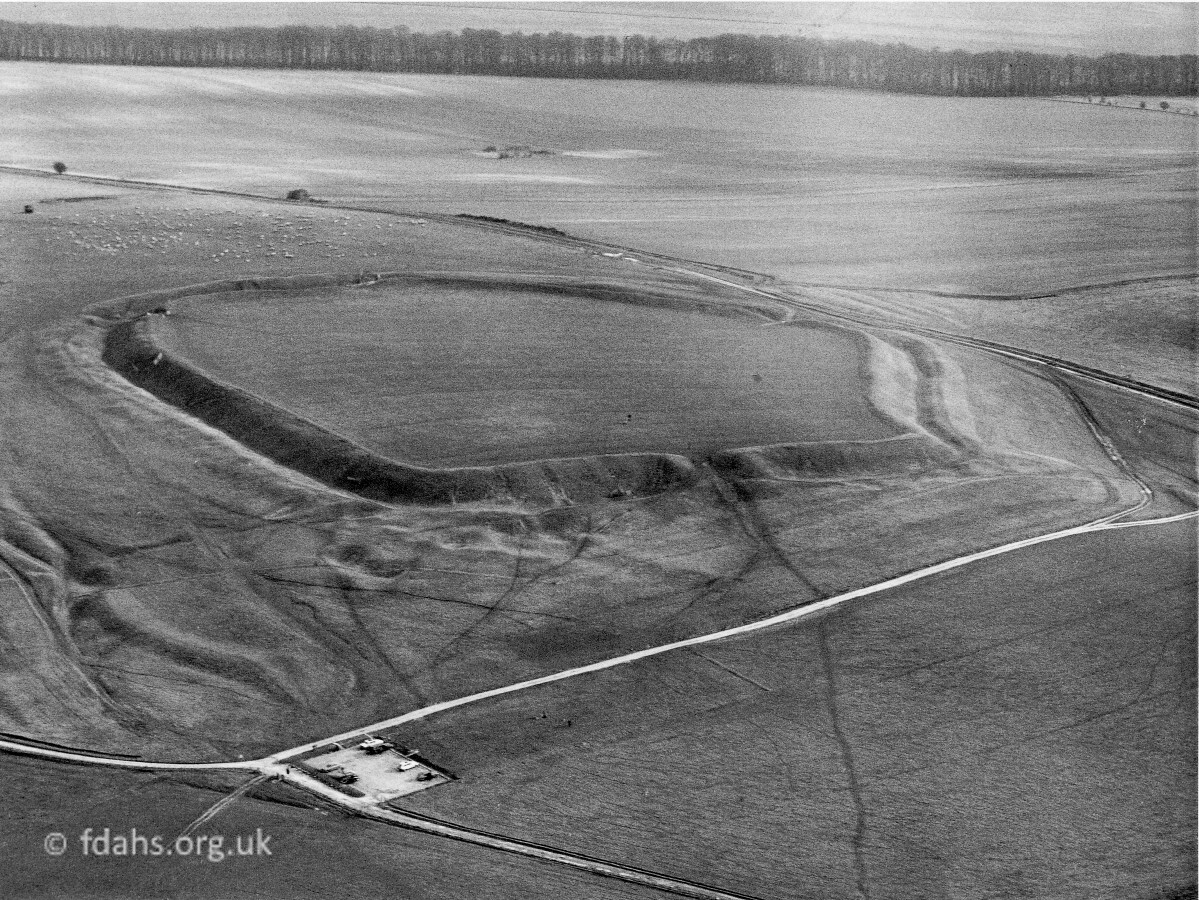