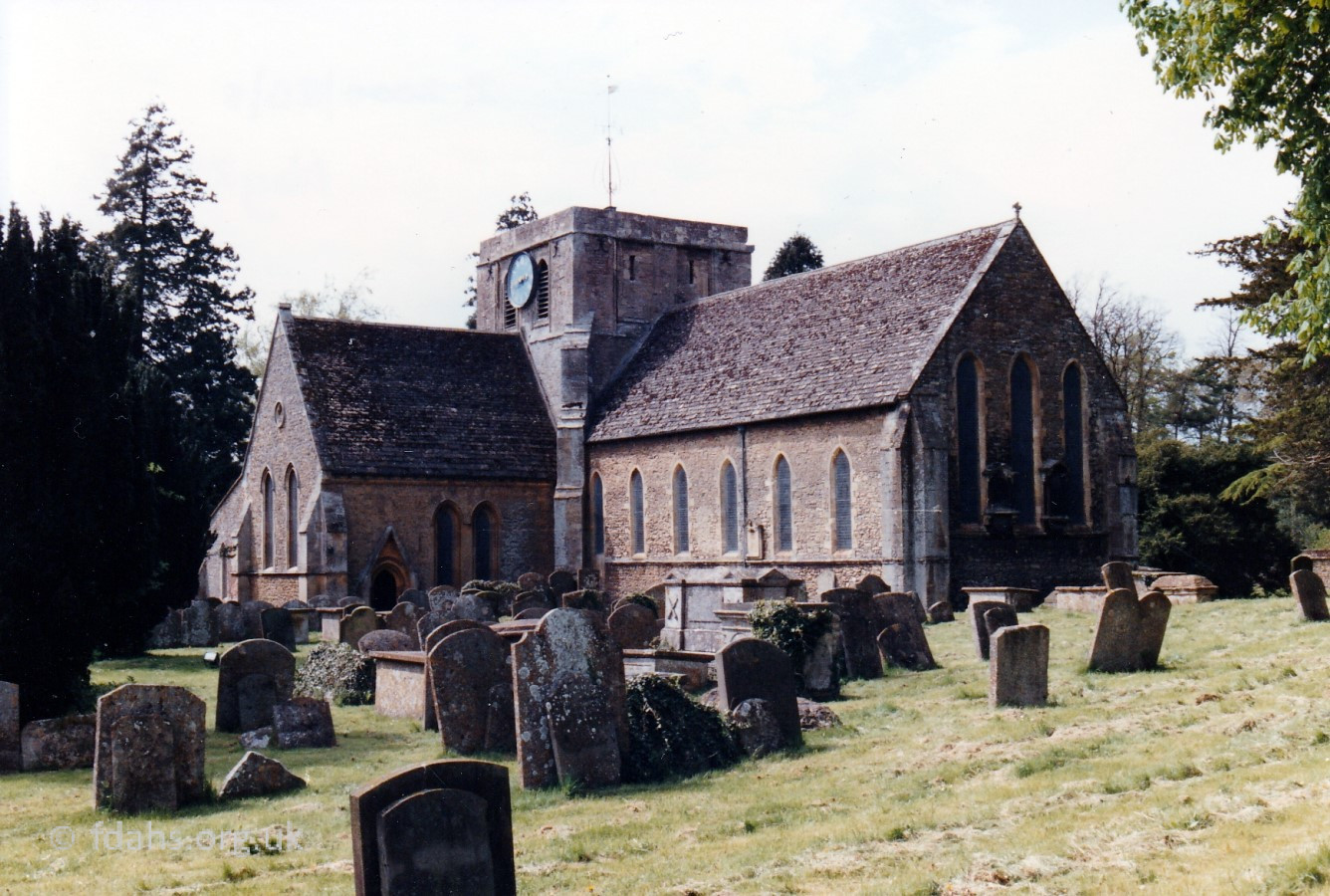 The church is on the site of earlier buildings of the Saxon and Norman period. Parts of the church date from the 12th and 13th Century. The Unton, Pye and Bennett families have their tombs and monuments in the church. All the stained glass windows in the chancel are dedicated to the Bennett family. 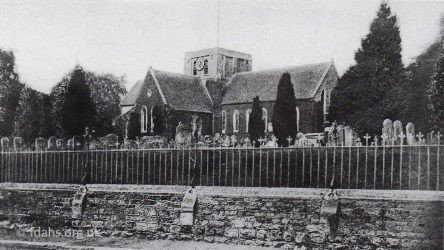 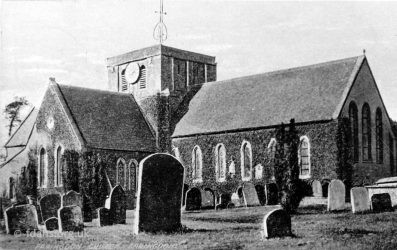 All Saints Church, pre-WWII, with cross-topped railings. The spire of the church was damaged in the Civil War in 1646 when the south aisle of the church was demolished. When the bells were removed to be re-cast in 1926, a broken cannon ball was found in the tower wall.

The drawing of the church on the left was done around the 1840s before alterations and additions took place. Note the difference in the levels of the roofs. In 1853, during the period of the Crimean War, extensive renovations took place. The roofs either side of the tower were made level and the Littleworth Aisle added to the front of the tower. Daniel Bennett of Faringdon House paid for the addition of this aisle and for the roof to be replaced. Also at the same date the organ gallery under the tower and the pews, galleries and other fittings round the nave were removed. The whole church was refitted with oak open benches and with Minton’s plain tile paving on the floor. The second drawing, showing the externally visible renovations is from around the 1890s. More… Faringdon Parish Church Restoration FA 9th July 1927.

Bells of various kinds are known to have been used from the remotest times past as a means of summoning the early Christian congregations. The earliest method of announcing the hour of public worship was by a handbell rung at the porch. Then came types of bells struck by a hammer. When bells were first hung in the church tower in Faringdon is uncertain, but in 1708, six bells, cast by William and Robert Corr, of Aldbourne were installed. The tenor bell cracked and was re-cast by R. Wells, of Aldbourne, in 1779. Number five also cracked, and was re-cast by James Wells, of Aldbourne, in 1803. In 1874 the six bells were taken down; number four being cracked was re-cast by Mears and Stainbank, of London, who also supplied two new bells, making a peal of eight. New framework was made and the bells re-hung by Frederick White, bell-hanger of Appleton, and when completed the Appleton ringers gave a peal containing 5,040 changes, in three hours, composed and conducted by Mr F. White. This was on the 10th November, 1874. The ” Ting-tang” or little bell, as it was usually called, is probably the oldest bell in the Church, and was doubtless originally the Sanctus Bell, which was sounded at the consecration of the Holy Communion. For a great number of years afterwards it was used just before the commencement of service, as at most other Churches. What are called the eight o’clock bells, rung on Sunday mornings were no doubt originally rung for early Mass. Another old custom is the Passing Bell. In former days it was customary for the bell to be tolled immediately after the death of a member of the Church, when a messenger was sent to the Vicar or Rector of the parish asking for the passing bell to be rung. This custom is still continued in some parishes, but for many years in Faringdon the custom has been to sound each bell three times for a man and twice for a woman, and lastly to toll the tenor bell, the morning after a death takes place. Adapted from an article on ‘Faringdon Church Bells’ in The Faringdon Advertiser 2nd January 1909. More… Faringdon Church Bells FA 2nd Jan 1909. 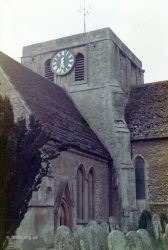 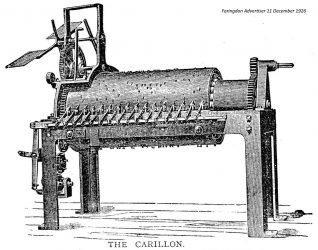 In 1926, the clock and chimes in the ringing chamber were replaced by Messrs Smith & Sons of Derby, makers of the new clock at St. Paul’s Cathedral, London. It included a modern carillon machine, which plays a tune on the bells every three hours commencing at 6 am and finishing at 9 pm. The tunes that are played are: Sunday ‘Holy, Holy, Holy’; Monday ‘We love thy place O God’; Tuesday ‘At the name of Jesus’; Wednesday ‘God moves in a mysterious way’; Thursday ‘Through the night of doubt and sorrow’; Friday ‘Thy way not mine O Lord’; Saturday ‘Jerusalem my happy home’. The carillon had to be wound every day by hand, by the Tower Foreman or Steeple Keeper, until the process was electrified in recent years. At the same time the bells were removed and recast by Messrs John Taylor & Co. of Loughborough. They were then rehung with all new fittings – see photos below. 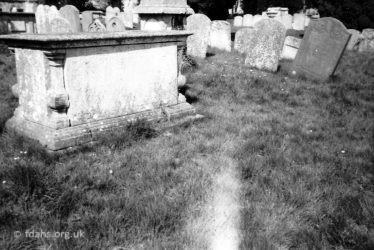 All Saints Church graveyard has gravestones dated from 1620 and possibly earlier. It was closed around 1980 and further burials were referred to the cemetery in Coach Lane. All the information on and around the gravestones has been recorded in a searchable Excel spreadsheet, which can be obtained together with a plan** of the graveyard from the Faringdon Community Website at www.faringdon.org/all-saints-churchyard.html

** This plan of the graveyard is too large to print and very slow to download. A printable A4 size plan can be downloaded from here: all_saints_closedchurchyardplan1980.pdf.

Other places of worship in Faringdon