More photographs and information about the shops and other businesses in London Street. The photographs of premises shown here have been scanned in from the original photographs given to the Society over the years and stored in the Society’s archives. The numbers given for each property mentioned correspond as accurately as possible to the postal addresses and are shown on the above map. An occupational history of each premises, as far as is known, can be found on the ‘Shops & Businesses in London Street‘  page. There is also a ‘London Street Views‘ page that contains general information about the street and may contain further details on the premises shown in the photographs. 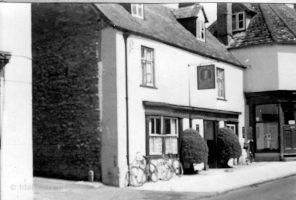 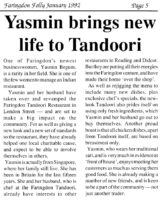 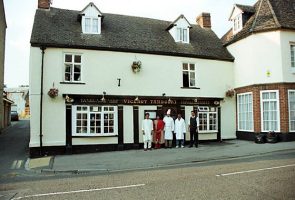 c1950’s, 1992 & 2000. #19 on the corner of Swan Lane. Originally the Swan public house as far back as 1830, then was renamed the Marlborough Arms by 1864. It survived as a pub until about the 1980s when it became the Faringdon Tandoori Restaurant. Yasmin Bagum (see press article) took over the restaurant in 1992 and renamed it later as the Viceroy Tandoori Restaurant. She also took over the Indian restaurant in Coxwell Street. The photos also show #21 next door when it was either a hairdresser’s 1930-60s or later a picture gallery, and then a private house. 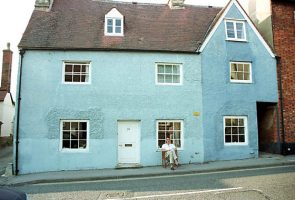 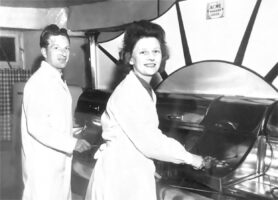 2000 & 1962. #29. The second photo is from when it was a fish & chips shop, called ‘The Fish Bar’ and owned by Keith and Hazel Thomas, seen here in the photo. They moved in and took over the business, already an existing fish & chips shop, in 1962 until 1968. It was a bit of a leap of faith as they had not done anything like it before. Both the premises and the business were run down, but things were much improved by the time they left. On one day just before Christmas in their first year they offered a free fish and chip supper to old age pensioners living in Faringdon. One condition – they needed to produce their pension books as proof of their status. The business continued for some time after the Thomas family left and eventually the premises became just a private home. 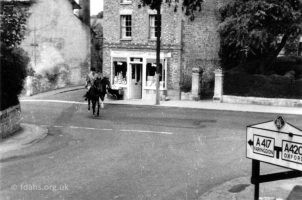 1920s & 1953. The shop at #77 is on the corner of London Street and Coach Lane. It was a grocery shop, and in the early days also an agent for wine and spirits. It was run by Henry Williams from 1844 to the end of the century and then continued by George Ernest Eastoe and his wife Alice until 1926. Mr & Mrs Eastoe are standing in the doorway of the shop in the photograph. For the next three years it was owned by J.A. Greenwood and in 1929 Miss Elsie Bedford took over the business and continued until 1946. In that year Cecil Blissett bought the shop and it continued to thrive as a grocery shop until 1971 when Cecil and his wife Nancy retired and it became their family home. 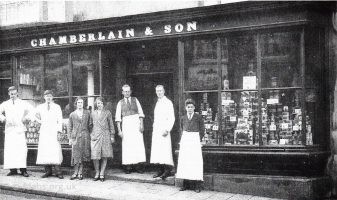 1931. #10 Chamberlain & Son’s grocery store since 1910 (later an off licence) in London Street. Left to right: Artemus ‘Art’ Shurmer; Leslie Pauling; Dorothy Bowerman; Betty Willis; Jim Egleton; Ted Newdick; Jack Bryan (his first day at work). This was a very high-class grocer/ the smell of freshly ground coffee would linger in the street tempting customers inside. The shop was rebuilt c.1938 and the frontage moved back to its present position. The Co-op moved here for a short time when their premises in Marlborough Street were demolished to make way for the Police Station and Telephone Exchange. 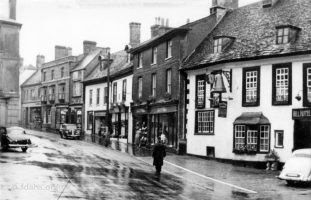 1953. Looking up from the Market Place, to the left of The Bell was Noel Wilkes’ ladies and gents outfitters. Then going up London Street are Frank Thair’s boot and shoe shop, W.H. Smith’s paper shop, Shenton’s sweet shop, a private house, and Chamberlain’s grocery shop.