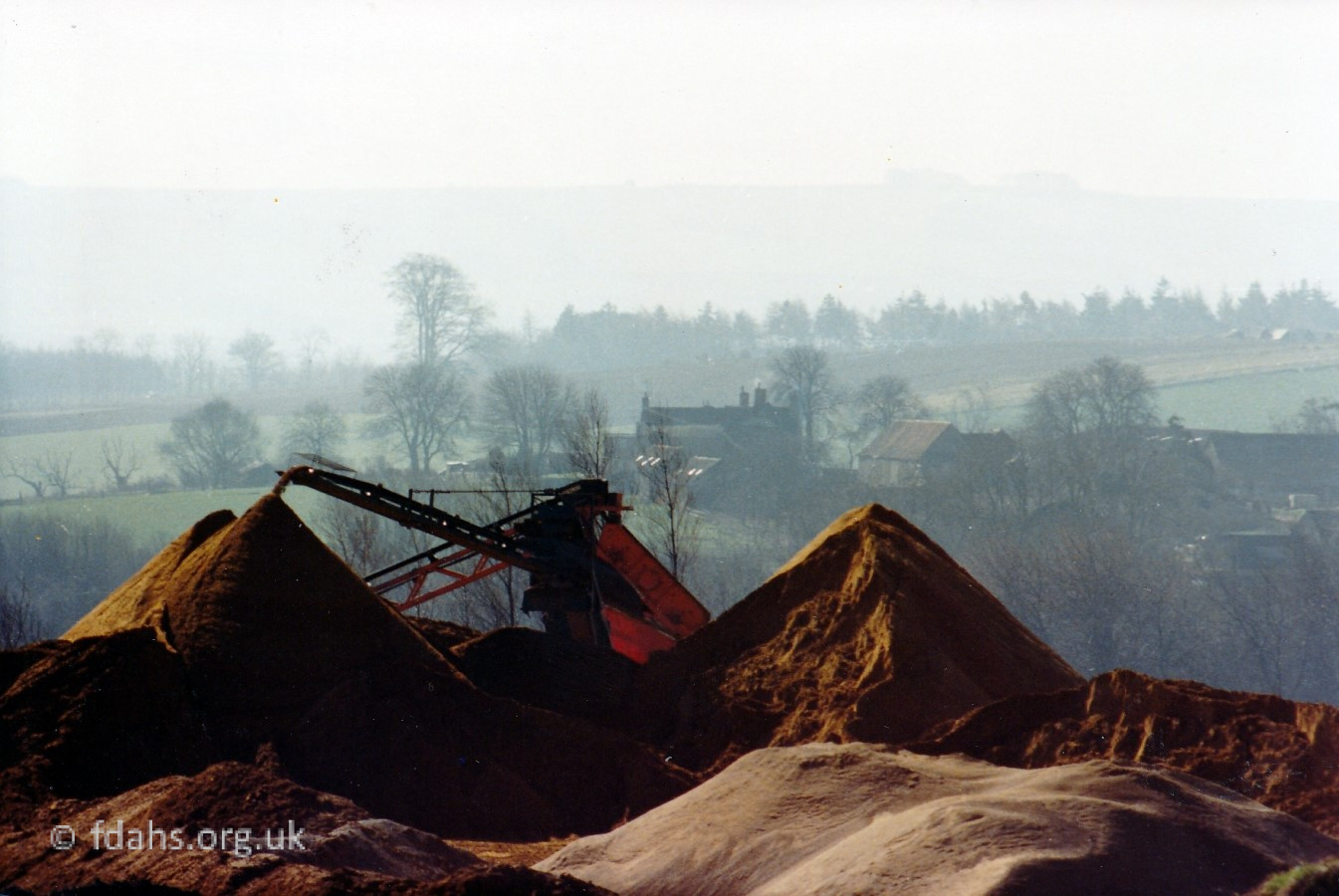 During the Jurassic and Cretaceous Periods between about 200 and 65 million years ago, Oxfordshire lay under a relatively shallow and warm sea full of coral growth and other animal life. Sea levels rose and fell during this time and about 110 million years ago the area was flooded with sandy sediments known as Greensand. The deep sedimentary deposits of limestone, sands and gravels left behind as the continent rose and drifted northwards are highly sort after by the building, construction, landscaping, decorative and leisure markets. The deposits around Faringdon are untypically thick with approximately 20 metres of sponge gravels overlain by 30 metres of coarse sand. 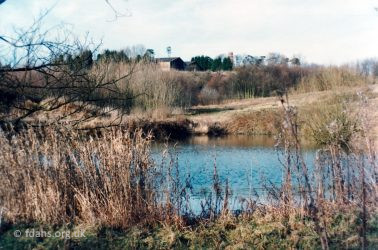 Quarries to extract these materials have been and still are plentiful in the area, particularly between Faringdon and Stanford-in-the-Vale to the south-east. There are a number of small ancient quarry sites, now absorbed within the expanding town as it grows towards the new bypass; such as the ‘Old Clay Pit’ that is now a fish pond in Faringdon Country Park, shown here on a section of a map from 1910 and in the photo. Click on the map to enlarge it.

There were also two ‘Gravel Pits’ in the area just beyond where the secondary school is now up Fernham Road. They had been freely used by the residents of the town as a land-fill site since the 1930s. The area was left derelict for many years and eventually built over around 2010 to become the Fernham Gate housing development, with some houses actually in the steep-sided hole of one of the the pits that had not been filled in. Another up Sandhill Lane called ‘Faringdon Pit’ was still in use until recently by Rogers Concrete Ltd (more below). A small ‘Gravel Pit’ off Coxwell Road has now disappeared under the Coleshill Drive housing estate. Further to the north off the Stanford Road, there was an ‘Old Sand Pit’ now the Faringdon Sports Park. Off map to the north is an ‘Old Quarry’ on the London Road opposite Sudbury House.

Beyond the bypass, the tiny ‘Gravel Pit’ shown on the map in 1910 has since expanded greatly (shown in green on the map) to become Wicklesham Quarry. Then to the south is the ancient site called ‘Cole’s Pits‘. There are also three large working quarries on the Stanford Road towards Stanford-in-the-Vale. More on these below. 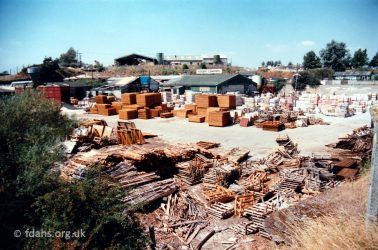 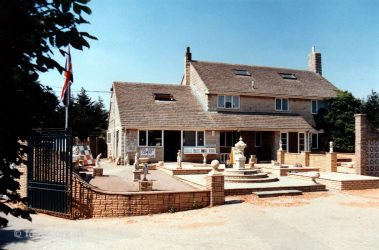 Roger’s Concrete used to occupy an old quarry called ‘Faringdon Pit’, which was situated towards the end of Sandhill Lane (now on the town side of the new A420 bypass). In 1958 the company was started by Brian Rogers, who realised there was a demand for reconstituted paving slabs. As well as the sale of general sand, gravel, stone and cement; slabs and other products were quarried and hand-crafted on-site. They ceased to operate on this site in 2018 and moved to Pioneer Road, off Park Road as a retail only company. Originally intended for industry, the site is now currently awaiting housing development.

1970. Faringdon Fencing’s first saw mill, started by Mr Pakeman, in the disused Sands Hill gravel quarry. The newer sawmill can be seen in the background. For many years this site was used by the council as a household waste tip. The company was sold to Rogers Concrete. 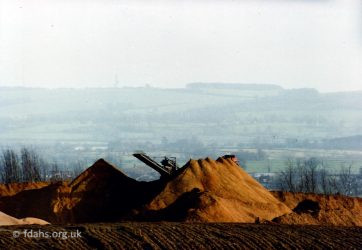 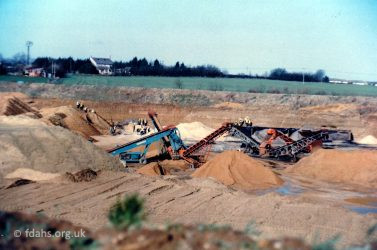 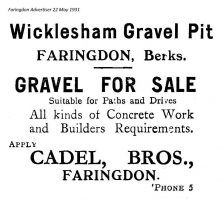 Wicklesham Quarry, a large commercial quarry lying on the southern side of the A420 bypass and accessed from the new Wicklesham Farm exit had been active since the 1930s on the original site of a small gravel pit that had been there for much longer. The site grew a lot bigger but by 2015 had become exhausted and left largely to nature. The area is shown in green on the above map. On a much older map3 the area was labelled as ‘Woad Ground’, so presumably it was once used to farm the yellow flowering plant called ‘woad’. Woad leaves were once the main source of the indigo-blue dye that has been used since ancient times and more recently for police uniforms. 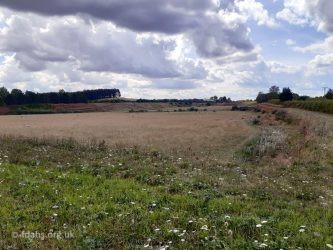 Enforcement action was taken against Grundon Sand & Gravel Ltd, the current owners of the quarry, in 2016 when they repeatedly failed to comply with planning conditions to restore the site to its original agricultural use. The restoration required recreating a fertile soil bed in the quarry base using the original topsoil, and preserving the fossil-rich walls and naturalised plant and wildlife. The site Is designated as a ‘Site of Special Scientific Interest’ for its unique fossil records. It is known to contain a very rich and unusual assemblage of over 150 species of fossils, including rare sponges, many of which are known to occur only at Faringdon. It also has fossil reptiles – turtles, ichthyosaurs, plesiosaurs and crocodiles. The mature ponds at the base of the quarry, rare habitats known to contain great crested newts, have since been filled in, and vegetation stripped. The base of the quarry has now been completely levelled and grassed over, with one small pond at the side. Faringdon Town Council’s neighbourhood plan has earmarked the area for industrial use as a business park. Currently, in 2020 there are cows grazing on it (photo).

Faringdon Quarry. In 2015, Grundon Sand & Gravel Ltd opened a new quarry a little to the west of the old Wicklesham Quarry with access from Fernham Road. This new area is shown in pale yellow on the above map. It includes a concrete batching plant, which is a set of equipment used to make concrete on a large scale.

Quarries off the Stanford Road

Bowling Green Quarry is located on the A417 Stanford Road a few miles south of Faringdon and has a range of operations and products. The quarry produces a dry-screened sand plus several grades of crushed or screened rock. The quarry also offers a tipping operation for inert materials.

Shellingford Quarry (photo top of page) is situated further down Stanford Road just before the village of Stanford-in-the-Vale. A large site producing a full range of both primary and recycled aggregate and building sand. Also available is quality screened topsoil. On the opposite side of the road is the local land-fill and recycling site. 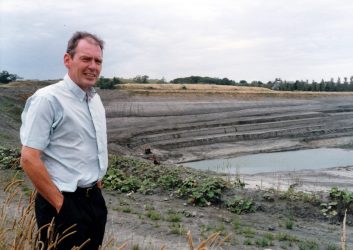 Baulking Quarry, between Shellingford and Uffington, was the last Fuller’s Earth quarry in Britain where it has been mined since Roman times. Fuller’s Earth is a type of fine-grain clay formed from deposits of volcanic ash in sea water laid down during the Middle Jurassic and Lower Cretaceous Periods. It has a very wide range of uses, one being well known to home-brewers as Bentonite, which is used to aid the settling of sediments when making beer or wine. The quarry at Baulking employed 30 people but was exhausted by 2002 and permission was not granted to go ahead with a new quarry. The site has since been restored and is now a large lake.

Photo: Bob Porter, quarry manager, hoping to get permission to go ahead with a new quarry. (Faringdon Folly 05/09/1997) 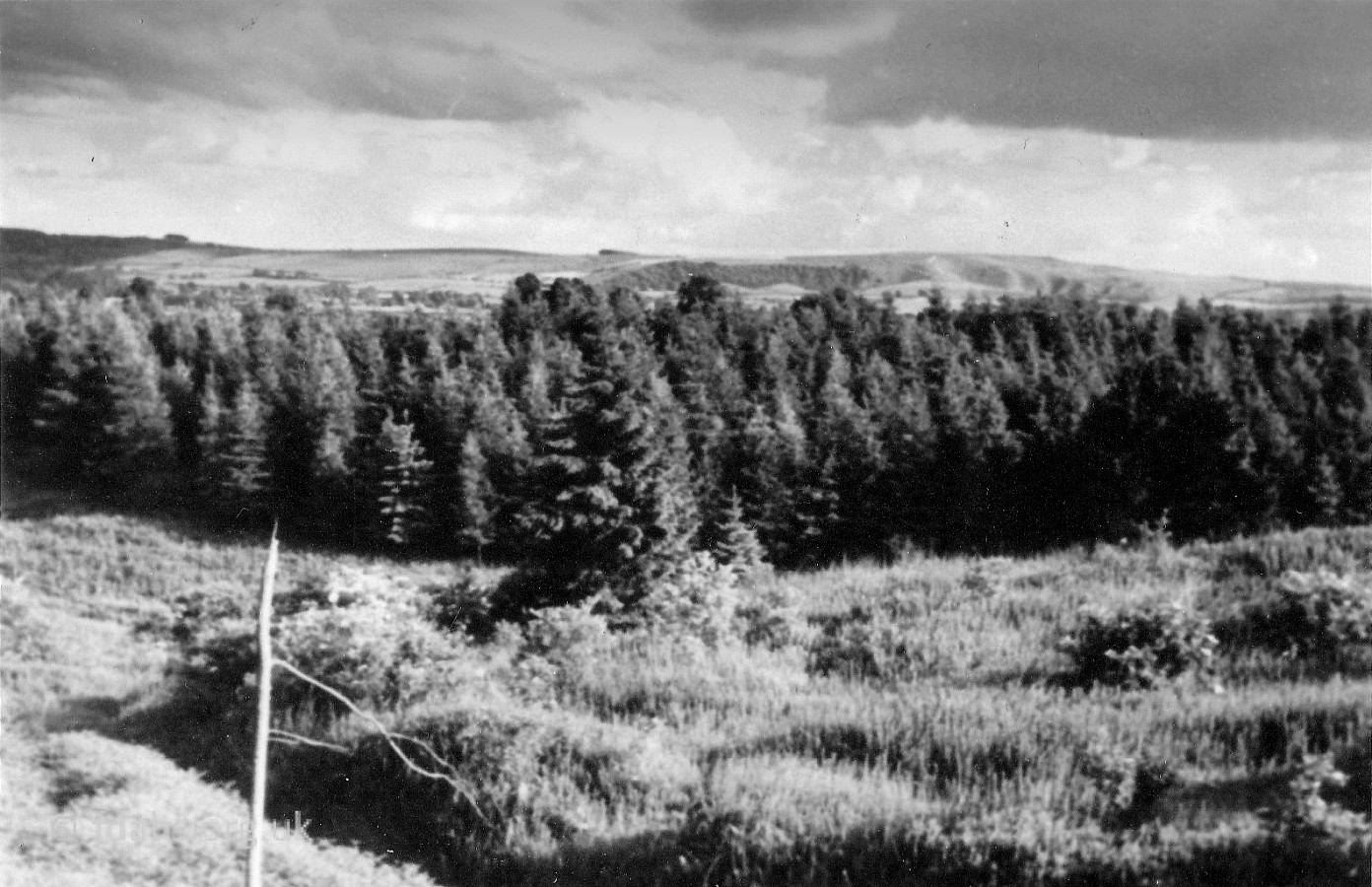 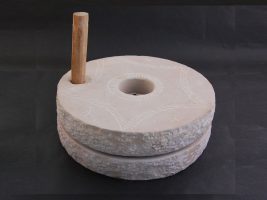 Cole’s Pits was an ancient site south of Wicklesham Farm on the hillside to the west of the old and now dismantled railway line. There were 273 pits covering an area of 14 acres, part of which is shown in the above photograph taken in 1953. The pits appear to be abandoned quarries, where shafts were dug for the purpose of obtaining the underlying ironstone and/or clays deep beneath the sand. 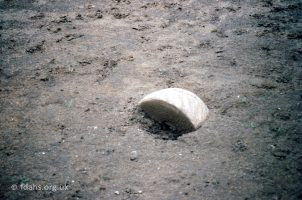 A lot of shattered stones have been ploughed up around the site that were bits of quern-style millstones dating from the Bronze age through to the Saxon period. This suggests that there may have been a medieval millstone factory here. The quern millstone was a tool for hand-grinding cereals into flour, first used in the Neolithic era. About a foot in diameter and used in pairs, the upper stone had a wooden handle and a hole in the centre for feeding in the grain. The whole may have been steadied by a wooden frame.

The name of Cole’s Pits is said to come from a local belief that this was once the site of the castle of Old King Cole, of the ‘merry old soul’ variety. However, a pre-enclosure (c.18th Century) vellum map of ‘Wickensham’ 3 lists the pits as Upper & Lower ‘Coalspitts’ and ‘Pye pitts’; so they may have been named after the owners of the quarries.

The map from 1910 above labels Cole’s Pits as a ‘British Village‘. In 1784, some of these pits were investigated by the Honourable Danes Barrington1, who may not have known that the whole area around here is littered with ancient quarry pits. He decided that they might be the winter dwellings of a pre-Roman (Breton) people with a population of perhaps as many as 1400. He measured the depth of the pits to vary from 7 to 22 feet, 40 feet or more in diameter, placed in a regular pattern and rather close to each other. It was suggested that the pits might have been roofed over with bracken and branches to provide dwellings for the hunter-gatherer people who might have used them as temporary shelters. However, none of the expected domestic objects, such as pottery have ever been found there, so this theory is now considered to be obsolete. O.G.S. Crawford2, who claimed to have seen quern rough-outs in the vicinity, investigated these pits in the 1930’s and established their function to be Medieval millstone quarries.

Cole’s Pits was once a popular attraction like Badbury Hill is today where families went for picnics and children spent the summer holidays from school roaming free and playing in the woods. An extract from a collection of memories of life in the 1950’s says “It was a special place, a magic land of deep pits filled with brambles, bracken and even bushes and trees, surrounded by high hillocks and banks criss-crossed by grassy paths, and covered with a profusion of willow-herbs, ferns and foxgloves – all the beneath the canopy of tall firs.” See photo taken in 1953 above.

In the late sixties or early seventies the area was levelled to amalgamate two fields into one large unit.