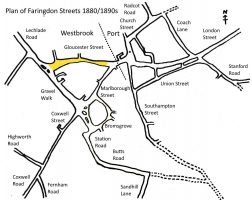 Gloucester Street heads west from the town centre of Faringdon. It was once the main road to Gloucester via Lechlade. 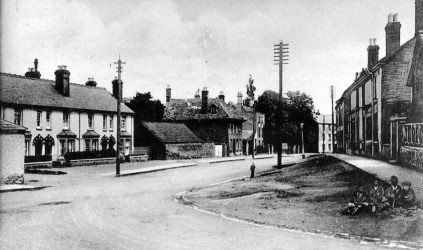 c1910s?. The top of Gloucester Street looking towards the town centre with Lechlade Road to the left and Gravel Walk to the right. The corner of the building on the left #56 later became the shop-front of Thomas Hicks the bakers. Here was the entrance to Parsonage Lane, Pound Close, and College Row, which no longer exist. Next are 4 terraced houses #38-32. The old barn next door later became Price’s motor cycle showroom. The wooden gate is now a metal gate at the main entrance to Faringdon Junior School behind. 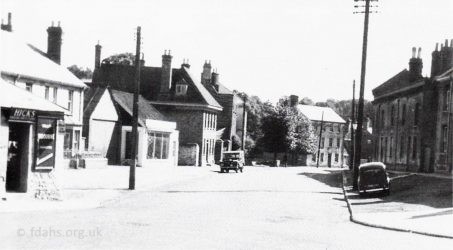 c1950s. The same place at the top of Gloucester Street looking towards the town centre with Lechlade Road to the left and Gravel Walk to the right. On the left is the shop-front of #56 Thomas Hicks the bakers and general store (see below). Next, almost hidden behind the shop are 4 terraced houses #38-32. The next two low buildings are Price’s motor cycle showroom (later part of Enterprise Garage group) run by Maurice Musselwhite, now demolished. It was replaced by #30 Elms Veterinary Surgery and #28 a private house or flats. The jeep is parked outside the gated path to Faringdon Junior School behind. The next house #26, with the high dark roof and tiny window, was the home of Mr Liles the piano tuner. This later became a hairdresser’s run by Eileen Gibbs, and is now a private house. Then #24 the Elms School, with the lower headmistress’ house just before it ,and #22 Faringdon County Library jutting out to the left of the trees. The last house past the trees is Elmside now converted to flats. 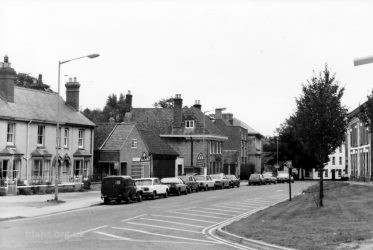 1982. Taken slightly more to the right, an updated photo of the top of Gloucester Street looking towards the town centre with Lechlade Road to the left and Gravel Walk to the right. Thomas Hicks the bakers and general store is now off photo to the left. The corner on the right has now been restored to a grass verge with trees. 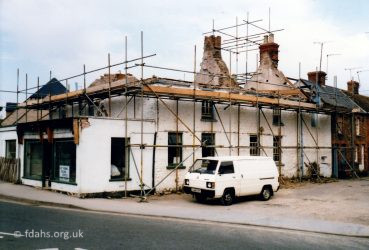 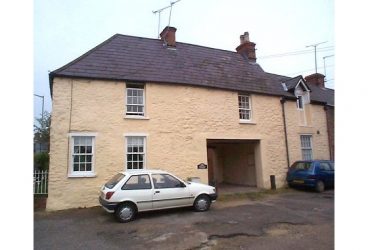 1988 & 2000. Repair and conversion into flats of Hicks old bakery and shop at the junction of Gloucester Street and Lechlade Road. The shop at the front was demolished and is now a front garden. The two lower windows to the right were removed and there is now an arch-way providing access to the rear. 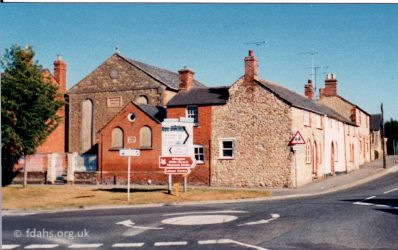 Opposite Hicks old bakery, still on the end of Gloucester Street (left). The stone building behind the red brick one is the Masonic Hall, which they took over in 1921. Before that it was the Methodist Chapel. Gravel Walk is to the right and Lechlade Road behind. 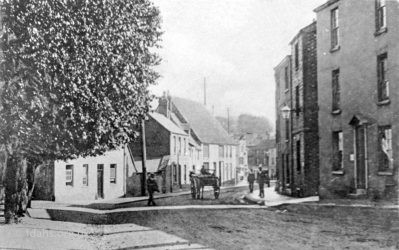 c1910. Further down at the middle of Gloucester Street. Behind the tree to the left and off photo is now the library. The building seen under the tree is Elmside, which was demolished and rebuilt in 1989. The larger building further down on the left is what was then Porter’s Corn & Seed Store, later taken over by Langford – see below. 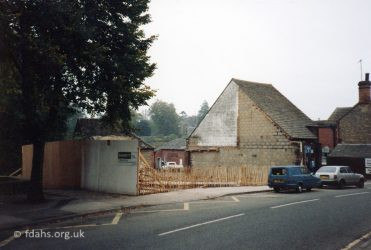 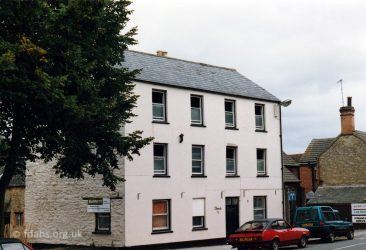 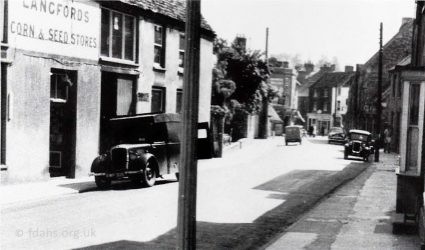 1953. Nearer the bottom of Gloucester Street looking towards the Corn Market, Langford’s (previously Porter’s) Corn Stores, on the left, was originally a barn belonging to a farm with the dairy on the opposite side of the road. Seeds, gardening items, pet foods, etc. were sold there. John Edmonds managed the business and then bought it, but kept the old name. Some time after 1995 it was converted into flats and called Langford House #12-10. Further down, #8 Gloucester House, the dentist’s surgery at the back, is fronted by trees and bushes. It is thought that this was the old farm house of the farm that stood there many years ago. Further along is the cinema where once stood some barns and old cottages belonging to the farm. Where the first sunblind is protruding is Taylor & Sons (butcher & slaughter house) at #6 Cornmarket then White Bros. (hairdressing establishment and tobacconist) at #7 Cornmarket with the second sunblind. At the end of the street can be seen the fishmonger’s shop belonging to Taylor & Sons at #1 Cornmarket. 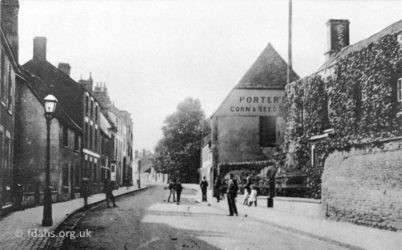 Early 1900s. Turning around and looking back up the street is a much earlier view from the bottom of Gloucester Street. On the right is Frederick Porter’s Corn & Seed Store 1895 to 1915, which by 1931 was taken over by Mr R. Langford. The ivy covered house is #8 Gloucester House. It is thought that this was the old farm house of the farm that stood there many years ago and previously Cistercian monks had a priory on this site. 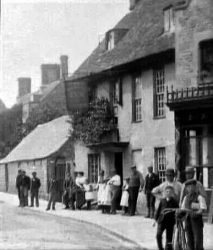 1890s. People waiting for something to happen outside the Volunteer Inn. The roof and chimneys of Gloucester House are on the far left. Then a barn or old cottage that was once part of the farm mentioned above, and demolished in 1935 to build the Rialto Cinema. The corner of the building on the right would have been Taylor & Sons, a butcher & slaughter house, at this time and was addressed as #6 Corn Market. 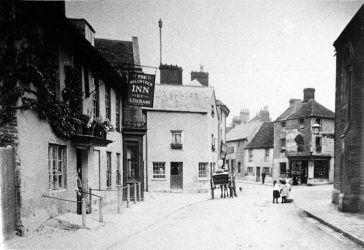 1898. Turning around to look at the bottom of Gloucester Street towards the Corn Market with the Volunteer Inn on the left and the Corn Exchange on the right. The rest of the photo is in the Corn Market. Next to the inn is Taylor & Sons, a butcher & slaughter house at #6 Corn Market. The large white building sticking out is #7, which would have been Yeatman’s sweets shop at this time. Across the road with the clock and gas lamp at #2 is Counsell Jewellers, which was established in the 1890s. 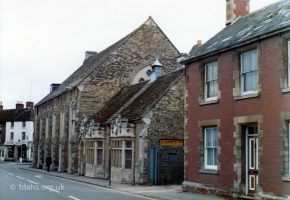 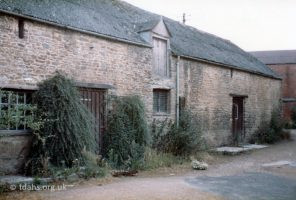 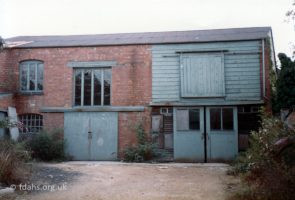 1983. Finally, on the other side of the street, is the side entrance to the back of the Corn Exchange, which was built in 1863. The lower building next door was built at the same time to be a Savings Bank and was soon taken over by the Freemasons. It has since been used as offices for the Town Council and as the Tourist Information Centre. The entrance at the side, before the red brick building at No 3 Gloucester Street, used to lead to G. Roberts Ltd Farm Supplies. The last two photos show the old buildings in Roberts Yard. These used to be the stables at the back of the Green Dragon Inn, which used to stand on the site of the Corn Exchange. It is now a cul-de-sac of new houses called Gloucester Mews.