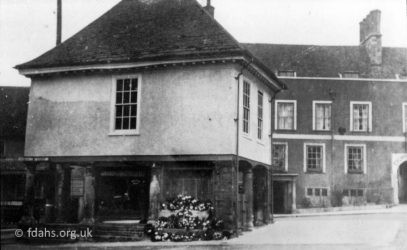 At a public meeting in 1919 it was decided to renovate the Old Town Hall, which had been in danger of being demolished, and place a tablet thereon containing the names of those who had given their lives in World War I from the parishes of Faringdon, Little Coxwell, Littleworth and Thrupp. The refurbished Town Hall and the memorial plaque, which can be seen above the poppies in this photo, were unveiled by Lord Faringdon on Sunday 6th February 1921. The service was conducted by the Rev. E. B. Lock, Vicar of Faringdon, who was accompanied by the Rev. G. T. Bent, Vicar of Littleworth; the Rev. E. Legg, Congregational Minister and Rev. Seymour-King, Baptist Minister. A large number of people, including about 50 ex-Service men, attended the service. 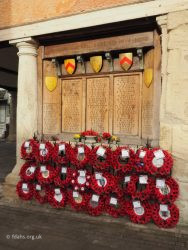 In 2020, there were two Remembrance Days when poppies were laid at the memorial. The second was of course the one that occurs every year at the 11th hour on the 11th day of the 11th month to commemorate the ending of WWI on 11th November 1918.

Earlier in the year it was the 75th anniversary of the Victory in Europe (VE Day). This is the day for celebrating the formal acceptance of Nazi Germany’s unconditional surrender of its armed forces on Tuesday, 8th May 1945, marking the end of World War II in Europe. The war against Japan in the Far-East continued for a few more months after that. 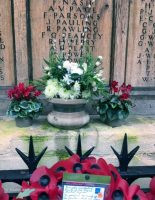 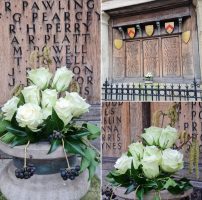 Faringdon and District Archaeological and History Society donated the War Memorial flower arrangement for February. Each month throughout 2021 a different community group will take part in this very important community project.