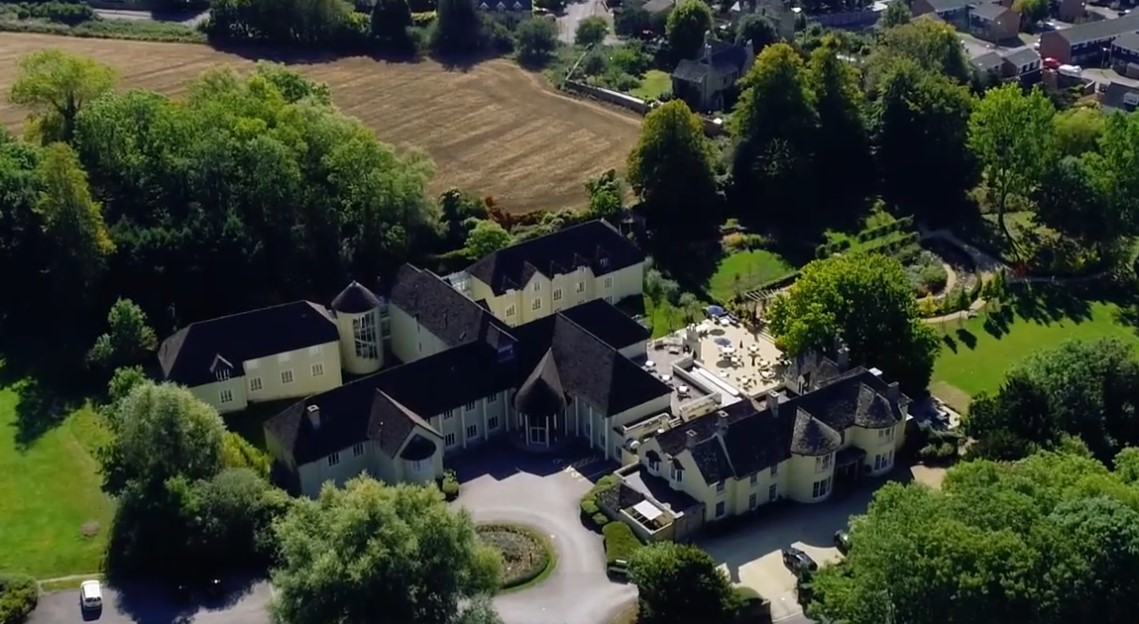 A hotel, restaurant and conference centre at 56 London Street. The eight acre site is situated on a level piece of ground on the otherwise sloping west side of Folly Hill. The actual house, front right in the photo, was originally called ‘Sadbury House’, certainly up until 1839 and it was recorded as an address in a document2 published in 1863. It was probably built around 1703 and was named after Samuel Sadbury who was the earliest recorded owner at that time. The house has been designated as a Grade II listed 17/18th-century building.

In 1978, the owner of Sudbury House, Sir William Glock, found a wide range of medieval and post-medieval pottery shards probably when digging a swimming pool just to the north of the house. They were later identified as the remains of C12th to C15th cooking pots and jugs. It has been suggested that a domestic settlement existed here in connection with the castle built on the top of the hill in c.1144 for the Empress Maud; which was stormed and taken the following year by King Stephen during the civil war known as ‘The Anarchy‘.

A private day and boarding school existed on the site from at least 1777 until it closed finally around 1839. The school was first advertised in 1777 by Rev. John Bradley, who was also Vicar of All Saints Church. The school catered for young gentlemen from the up and coming middle classes for a fee of £16 a year. Places would probably have been offered to boys anywhere between 7-16 years of age. At that time it would basically have been a seminary, a school of theology but it also included dancing, writing and arithmetic. Rev Bradley died in 1794 and what happened in the following 30 years has not been discovered.

In 1824 Dr Joseph Bowles purchased the estate and took over the running of the school, which he referred to as an English, French, Classical, Commercial and Mathematical Academy and gave it the name of ‘Faringdon Hall’. The fees ranged from £20 to £105 depending on the family wealth and status. A report in the Oxford Journal in 1825 stated that a school room was being built, 60 feet by 20, and of proportional height, with library, and cold baths. This was presumably a reference to the building or perhaps just a room improvement of the medieval-styled hall shown behind the house to the left in the drawing. The school has been identified by the handwriting on this drawing as ‘Dr Bordes’s School’ (so perhaps it became known by the name of the previous owner before Dr Bowles took it over). Dr Bowles left the house and the school in 1839 and the school building was completely demolished sometime after 1850.

Various people then occupied the house, now referred to as Sudbury House – full details of these and more are available in Peter Gale’s document referenced below. In 1989, the ownership passed to Cranfield University and Sudbury House was transformed into a residential conference centre and eventually a hotel. The site was substantially extended behind the original house without any archaeological excavations being performed (see photo). In 2013, the ‘Best Western Sudbury House Hotel’ as it became called was sold to a private investor, for some £2m and remains as a hotel, restaurant and conference centre.