The village of Eaton Hastings was originally by the River Thames but became a deserted medieval village with little left there now but the church and a few farmhouses. It lies about 3 miles north-west of Faringdon on a turning off the road to Lechlade. The 2001 Census recorded the parish’s population as just 81. The name derives from the OE/Anglo-Saxon ‘Eatun’ which referred to a farm or village ‘tūn‘ on a river or island ‘ēa‘ and probably named after the Hastinges family who owned it in the 12th century. The family may have been descendants of ‘Hastingas‘ a Norse-Viking tribe that once settled in England. Today, the village is part of the Buscot and Coleshill Estate, which now belongs to the National Trust. 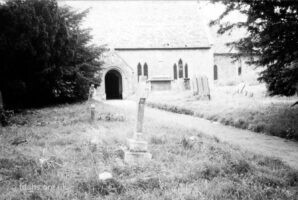 < St. Michael and All Angels Church, part is 11th-century, and the north doorway is also Norman. There are 12th, l3th, and 14th century additions, and a Jacobean pulpit with carved panels and a font with a carved 17th century cover. 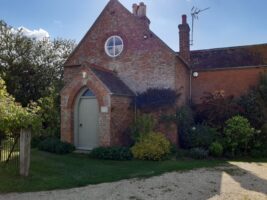 > The old school house, about half way down the mile long road to the church. 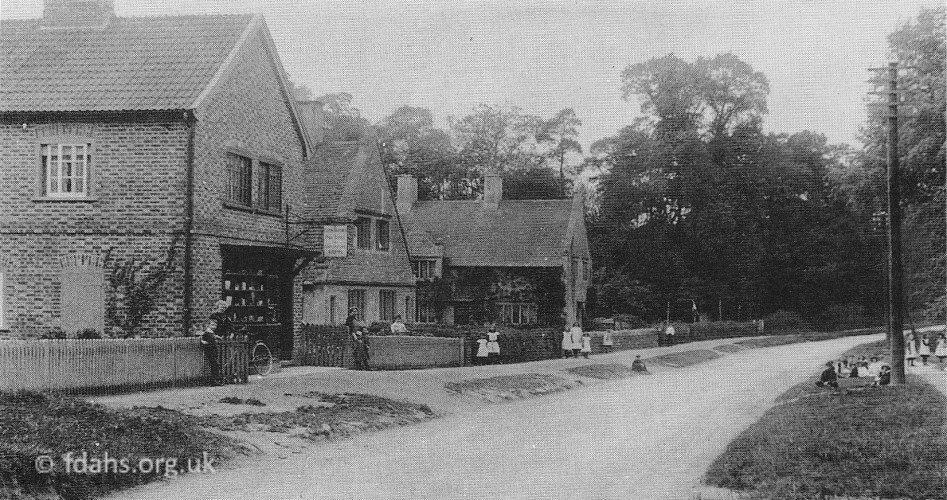 1915. On the Lechlade Road, just past the turning to the church. These houses, known as New Buildings or Roadside Cottages, were built by the first Lord Faringdon when he bought the estate in the 1880s. The large lake in Buscot Park is just beyond the trees. The photograph shows the village shop and Post Office with Miss Apse the postmistress outside, and the village children on both sides of the road. The photo is a bit deceiving as there is a large green just before the last building where stands the war memorial. The land was low lying and liable to flood and this is why the pavement was high to act as a causeway; it was known by that name for many years. 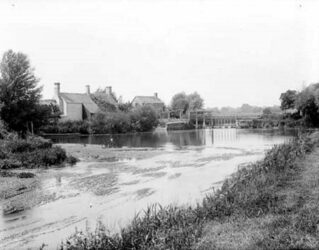 1883. Looking from below Eaton or Hart’s Weir, just upstream from Eaton Hastings. On the left was the old Anchor Inn and the weir keeper’s cottage. The weir had been in existence since at least 1746. Around the 1860’s an island had been created by a cut bypassing the weir and the buildings, in order to power two waterwheels as a part of Robert Tertius Campbell’s grand irrigation scheme on his Buscot Estate. The weir was also rebuilt to help maintain a head of water. The middle of the cut is now filled in and the rest used for moorings by the Anchor Boat Club. 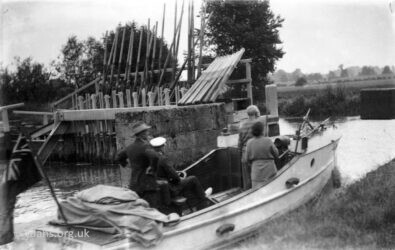 c1930s. The launch ‘Snowdrift’ negotiating the remains of the old flash lock in the weir. This was the last flash lock on the river when it was pulled down in 1936/7. A flash lock was an opening in the weir, usually kept shut with a gate. When a boat wanted to pass downstream, the flash lock would be opened, and the boat would be carried through the gap and over the weir with the sudden rush of water. The reverse direction required a lot of pulling on ropes.

A wood clad steel footbridge had to be built in place of the weir and flash lock for the footpath that crossed over it from Eaton to Kelmscott. The old weir keeper’s cottage still remains beside the footbridge and is used by the Anchor Boat Club. 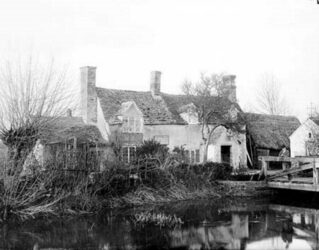 < Shown here in 1883, the Anchor Inn was next to the weir keeper’s cottage but a new one was built soon after, a little further downstream. 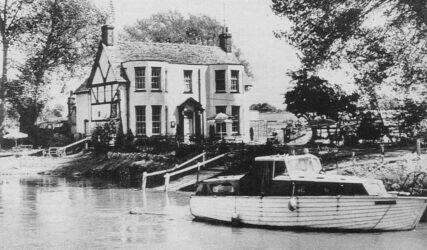 > The new (Victorian built) Anchor Inn in about 1970. This was a very remote pub and campsite near the footbridge. It had footpath but no public road access, being there mainly to serve the river traffic. 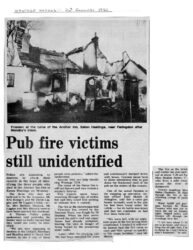 Unfortunately, in a tragic accident in 1980, the very remote Anchor Inn was totally burnt down during the early hours of a January morning. The landlord and two others died in the fire. The 20 attending firemen must have had great difficulty in getting there. They found no evidence at the time to explain the cause of the fire but it has been said that it was caused by a dog’s tail waving in front of the gas heater.