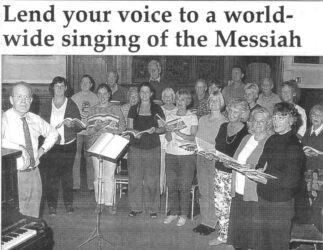 The choir was formed in 1975 by Michael Perkins who was their conductor. Less than five years later the choir won two trophies at the 31st North Berks Music Festival at Didcot. They won the Owen Williams Cup for mixed choirs of more than 25 voices with a total of 182 marks out of 200. They also won the Lloyds Bank Trophy in Class 1 for women’s choirs with 180 marks out of 200. Of the eight choirs that attended the one from Faringdon was described as the most accomplished in the festival. The choir has continued ever since with its excellent productions and regularly give recitals in various venues around Faringdon.

“We’re a friendly mixed-voices choir that meets for practice every Thursday evening at 7:45pm – 9:30pm at the United Church in Faringdon. Typically, we put on Easter, Summer, and Christmas Concerts that are held in local venues, and raise funds for local charities. Since 1975 we have given more than 200 performances. “