The paper was produced and printed every Saturday morning by Charles Luker from his newsagent shop at 4 London Street (at least 1891-1931). The shop became W.H.Smiths in the 1970s, and is now London Street Barbers. The paper was sold initially for three-ha’pence, 1½d (<1p) but was reduced to 1d in 1897 and remained as such for the next 30 years.

The first two columns on the front page shown here, dated 14 August 1869, are taken up largely by advertisements of  sales by auction of land, livestock and other property. Then we have Mr C.W.E Butler, a surgeon dentist in Gloucester Street offering “Teeth extracted for the poor, free of charge”. A Ladies’ School in Highworth advertises “A good sound education imparted together with every home comfort. The air of Highworth is exceedingly healthy and invigorating”. There are advertisements for female servants, a good cook, a groom (married), and ten carpenters. The Wheat Sheath Inn in London Street is advertising bulk sales of Anglo-Bavarian Ales with a full price list, for example: No.1 Mild Ale for 54/- per barrel, 27/- per Kilderkin and 13/6 per Firkin. There is a very long (expensive?) advert taking up more than half a column for Holloway’s Pills which are apparently the best remedy for nervous disorders, female complaints, headaches, loss of appetite, bowel problems and a whole list of every illness known to mankind.

In 1931, the paper still only cost 1d and the day had changed to Fridays. By 1960, the paper’s name had been simplified to just the ‘Faringdon Advertiser’ (possibly in 1942?), was produced every Thursday and cost tuppence, 2d (<1p). There were complaints that it contained little that actually concerned Faringdon, but then I suppose the sleepy town had little to tell. News from the surrounding villages was included but much space was given to articles and adverts as far afield as Witney, Cirencester, Oxford, and Reading; who surely had their own local press. Only two or three of the many shops in Faringdon were bothered to place advertisements in the paper but it did improve in subsequent years.

The issue of the paper on 25th June 1937 states that West Midlands Newspapers Ltd had controlled the destinies of the newspaper for the past 15 months and that they had decided that “the paper is no longer to be issued”. Although it seems to have appeared again by 1940.

According to the Faringdon Advertiser in 1960, the paper was estimated to have been established in 1858 by working backwards from the earliest copy in the company’s possession, which was No. 659 published in January 1861. Older copies were said to have been seen so there may have been gaps in publication. At one publication a week, I make that 1861-659/52 = 1848 not 58, even if they closed for a week or two at Christmas.

On 2 July 1937, the ‘Berks edition’ of North Wilts Herald became headlined as ‘The Faringdon News‘. It proclaimed to be “The only newspaper published solely for Faringdon and District.” This presumably followed the temporary demise of the Faringdon Advertiser the previous week. The title was dropped however in 1942. A copy of two issues from 1937 are stored in the society archives. 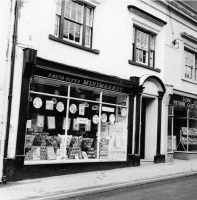 In 1942, the North Wilts Herald amalgamated with the Swindon Advertiser and Monthly Record (founded in 1854). It took over a shop in Faringdon at 15 London Street. (This was next to David Pitt’s Mini Market, which both later became part of Davis DIY.) It then amalgamated again in 1956 with the Wiltshire Gazette (founded 1816) to become the Wiltshire Gazette and Herald. The ‘Berkshire edition’ remained in existence as a weekly newspaper throughout these changes and covered Wantage, Faringdon and Hungerford. Local news for Faringdon was apparently a bit thin though.

In the 1970s (photo) the shop in Faringdon at 15 London Street was called “Evening Advertiser & Wiltshire Gazette”.

The first issue, Saturday 29th January 1972 (shown here) was free, then the charge remained at 4p until the last one, which was Issue 44 on 22nd December the following year. It was published fortnightly and the first issue states that “This newspaper is a non-profit making organisation, started as a subgroup of the Adventure Playground Project. It is a community venture run by the people of Faringdon”. It started off with some negativity about the purpose of the paper and the town in general, perhaps comparable to that provided by the social media trolls of today. An obvious complaint, concerning the readability of the original title ‘Faringdon Venture’ was rectified by the 11th issue and the title changed to ‘Faringdon and The Vale Venture’. The paper published comments, good or bad on many local issues and campaigns and made some unfortunate mistakes, both acts for which it continued to receive much criticism. Some of the articles, like ‘WHO CARES … Where is your child tonight?’ might have been considered controversial and a bit too close to the bone for many local residence of what had become a rather ‘sleepy’ town. The town’s population had remained around the 3000s for the past 140 or more years and suddenly there were masses of new-comers moving into the newly built housing estates and stirring things up.

The final issue of the paper stated that “Our proudest achievement? Introducing a new word into the English language …ALBATROSSITY – defined as ‘an undesirable event caused by apathy or ineptitude'”. All 44 issues of the paper are stored in our archives and they provide a valuable source of information about the town over those two years when Faringdon was still a town in the perhaps forgotten north of Berkshire. For just another 4 months anyway; until it became a back-water town in southern Oxfordshire on 1st April 1974. 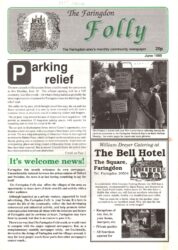 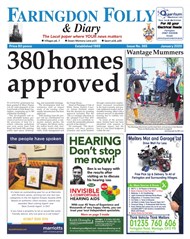 The Faringdon Folly, sold monthly, was the next truly local paper for Faringdon and nearby villages. It was founded in 1989 by nearby Clanfield residents Ian and Carmen Smith and proved to be very popular in the community. The first addition in June, shown here, was A4 size and changed to the larger A3 format 4 years later, but still mainly printed in monochrome throughout. In 2000, the paper was sold to Tindle Newspapers, who printed it in full colour. An office was set up at 9 Market Place, above (presumably?) Marriotts Chartered Surveyors under the name of Faringdon Newspapers Ltd in the hands of Jackie and Laura Stayt. The office was later moved to the Corn Exchange, Gloucester Street. The paper could be purchased from local newsagents for 60p and was later made available by subscription to read online or a printed copy could be ordered for delivery to your door. 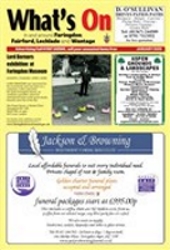 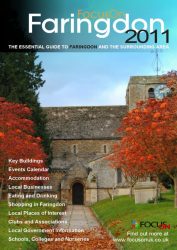 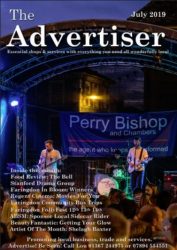