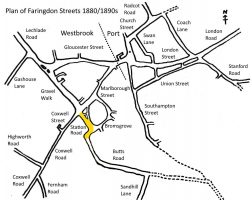 The start of Butts Road (now Park Road) was renamed Station Road when the railway came to Faringdon in 1864. The station closed in 1963 and the only part of Station Road now remaining is the very short section from the Marlborough Street/ Gravel Walk crossroads up to The Swan public house at Christopher Square on the corner with Bromsgrove. 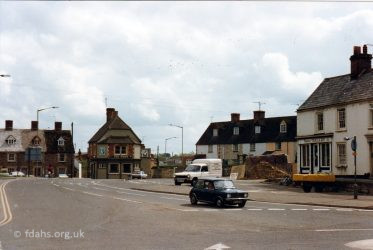 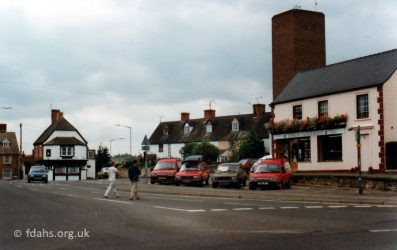 c1988 & 1992/3. Looking from the top of Marlborough Street. This section up to The Swan public house, the tall building on its own in the background, is still called Station Road. Turners Fishing Tackle is on the right at #4, now VIP Hair & Beauty Studio, and previously Watts (greengrocer), then Westall (baker). Next door is the new purpose-built Faringdon Fire Station with its practice tower being built, after it moved from a temporary location in Marlborough Street in 1961. On this site in the 1890’s there were extra classrooms for the school in the Lechlade Road, which were later sold to a corn merchant. In the 1930s Swindon Co-Operative Society had a hall built behind Mr Indge’s shop. The hall was still being used during the day to take the overflow from the primary school in 1960. It was also used almost every evening for meetings. Beyond are 5 terraced cottages (shown below). On the opposite side of the road used to be W. Absolom (draper) and before that a coal yard. 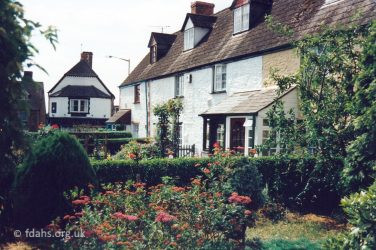 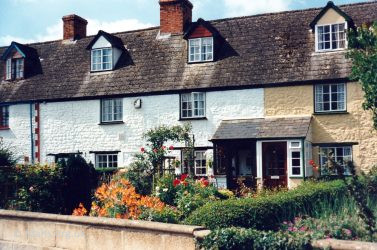 1994/5. Closer views of the terraced cottages beyond Faringdon Fire Station with The Swan across the road in the background. 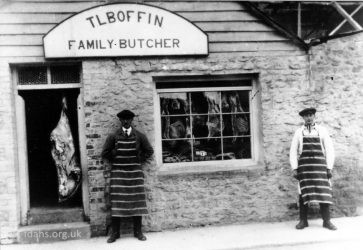 c1925 Somewhere on Station Road, probably opposite the new fire station and the above cottages, was Boffin’s butcher shop. Standing outside are Thomas Boffin and Lovell Drawbridge. Later the site was demolished in order to widen the road and the shop was moved next to the White Hart pub on Gravel Walk. Then further redevelopment in 1977 moved them on to London Street.

There were a lot of other old buildings opposite what is now the new fire station; all were demolished in order to widen the road for better access to the new bypass. Another one was Frank Lane’s Agricultural Engineering workshops which occupied an old WW1 hangar. See aerial photo below. 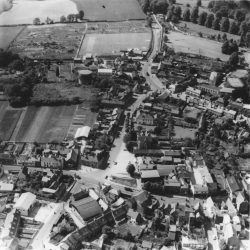 1961. Running up the centre is Station Road, Gravel Walk, and Lechlade Road. Station Road in the bottom left corner, with the brand new Fire Station just built on the left and across the road is the old WW1 hangar and other shops mentioned above, all now demolished back to where the row of terraced cottages on Bromsgrove remain. 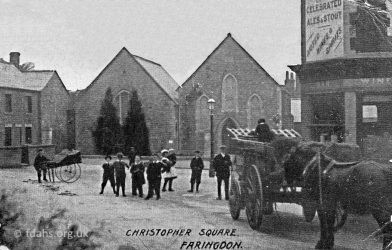 c1900. Looking left into Bromsgrove from Station Road with the Swan Inn on the right is Christopher Square. The Baptist Chapel is on the far side of the Square. The next tall building to the left that looks like part of the church has since been demolished. 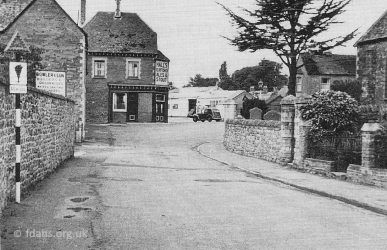 1953. Looking towards Christopher Square and Station Road from Bromsgrove. The Swan Hotel is dead ahead. The Baptist Chapel is on the right. A car can be seen passing along Station Road in front of Eagle Motors car repair workshop and stores. This used to be Clare’s Coaches. Tommy Clare started up with an ex-Army lorry at the end of WWI doing haulage and later on branched out into coach travel. The buildings have been demolished and the side-road, now could simply Eagles leads to a new housing estate. The house to the right of the garage, with the two upper windows visible, was Elliott’s sweet shop, which was run by Mrs Long. It is the last one on a row of old cottages and had to be demolished in order to widen the road. What was left was made into a small public garden (see below). 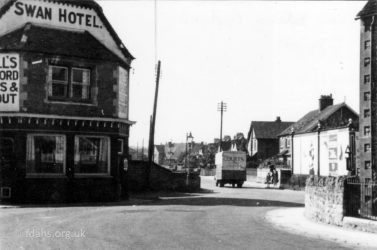 1953. Back on Station Road. The road is very quiet and lacking in vehicles – only 1 in 10 households in the UK owned a car at this time. In the 1970s, it all had to be straightened up and made wider for when it became a main route to the new bypass. The walled garden to the right of the Swan Hotel had to be moved back. Eagle Motors opposite is boarded up and destined to become the start of the Eagles housing development. The sweet shop and low stone wall sticking out from the right is definitely in the way and therefore just had to go.

The Swan Hotel now marks the end of Station Road, since the railway station, which was further up the road, was closed in 1963. The road now continues from here as Park Road.

Continue with A Tour of Park Road in the 1900s

The following shops and businesses were advertised in Station Road, Faringdon in the years stated: 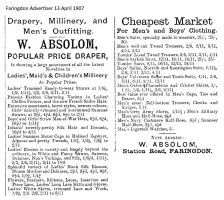 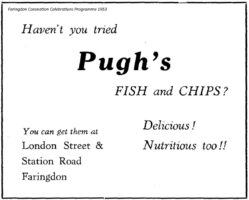 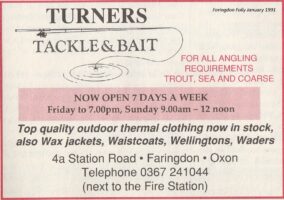 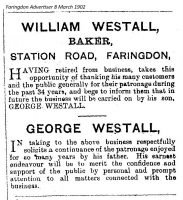