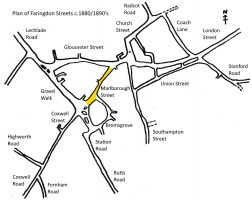 Marlborough Street heads south-west from the town centre of Faringdon. It was once the main road (A420) to Swindon, and onwards to Marlborough and Salisbury or Bath and Bristol before the bypass was built in 1979. 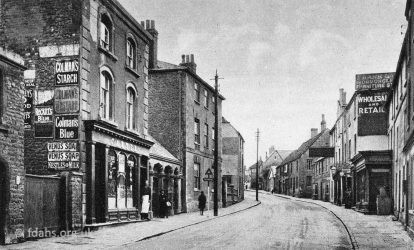 1921. Looking up from the bottom end of Marlborough Street. Just the wall and gate of the post office #1 can be seen on the far left. In the doorway of #3 Carter’s is Mr Cyril Carter. The arched windows of #5 behind him was a cafe. The shop #10 on the right, which juts out, was Goulding Goddard’s drapers. The sign left to remain on the roof says Frank Lane & Co, Ironmongers & Furniture Store. It was later re-fronted and split into two to form a small shop #10a on the corner currently Faringdon Cobblers, the larger part beyond is now Betfred a betting shop. 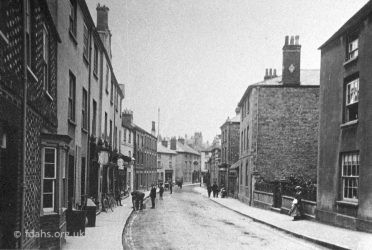 c1908. An early picture looking down Marlborough Street towards the Corn Market or the Narrows. At the bottom of the street, on the right, is the Post Office with Carter’s grocery store next to it. Near the front of the picture is the wall bordering the Congregational Chapel, which is now the Roman Catholic Church. Counsell’s clock is visible outside what is now the Nut Tree.The person bending over the bicycle could be mending a puncture, a regular hazard at this time due to the condition of the roads. A big problem for the pneumatic tyre at this time, and well into the fifties, was the abundance of horses, many of which were prone to shed the nails from their shoes. 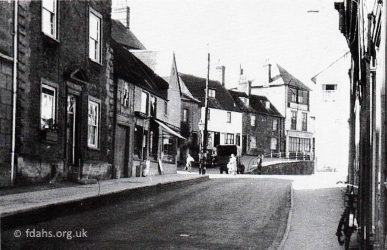 Late 1950’s. The top end of Marlborough Street showing Arthurs Hill. Note the lack of traffic and people. Today there is a continuous line of cars parked on the left hand side. At the corner of Bromsgrove and Marlborough Street, on the left-hand side of the picture by the lamp post, is #23 the grocery shop belonging around this time to Mr Manners (more below). On the right are shop fronts of Drew’s (butcher & fishmonger) and the Co-op, all now demolished. The Police Station and Telephone Exchange #18-22 now stand on this site. 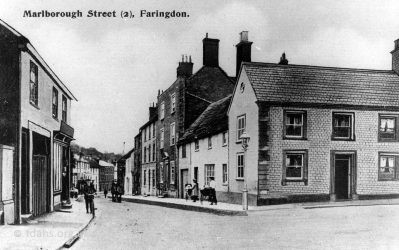 c1915. Looking back into town from the corner with Bromsgrove and a lot earlier. On left is a gated entrance through to the back of the shops. This was later converted into a shop and became #30a Webb’s Taxis 1977, Tien Hong Fish Bar 2000; and Ming’s Takeaway 2012-19. Next door is #30 ‘Buffer’ W. Foard’s family grocery and bacon curer shop. It later became E.T.Beavis (boots & shoe repair) 1966, Michael Bishop Watch Mender, and finally a carpet shop. It has been left empty since 2014. The private house with the chequerboard brickwork on the right at the junction of Bromsgrove, is #23. It was built by Hughes Bros., painters, paperhangers and bell hangers. It later became a grocery shop and had a variety of owners such as Billy Long, Chapman, Paddon and in the 1950’s Manners. Recently it has been a pet shop, then a shop selling second-hand items, before becoming empty and derelict for a while. It has now been converted to two private houses. 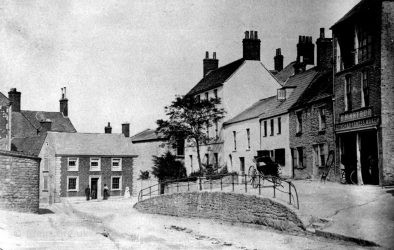 1890’s & 1990’s. A little further back up the street, an early picture of Arthur’s Hill looking back towards town beside a more recent one. The road had to be deepened during the coaching era to ease the horses’ load up the steep gradient. The hill was named after H. N. Arthur, a coach and harness maker, whose business #35 is shown on the right of the picture. The building was taken over by Frank Lane’s carpenter shop and during WWII was used to house the ambulance; today it is an antique centre. Next door #31-33 was the home of Mr Smith who was the first recorded professional photographer in Faringdon, The adjacent cottage # 29 became Ron Young’s barber’s shop before he moved into London Street. The large house at the end of the rank (addressed as #2. Bromsgrove) is Marlborough House. The smart looking private house, with the chequerboard brickwork, at the junction of Bromsgrove is #23, which became the grocery shop belonging to Mr Manners in the 1950’s, a pet shop in the 80’s and a junk shop in the 90’s.