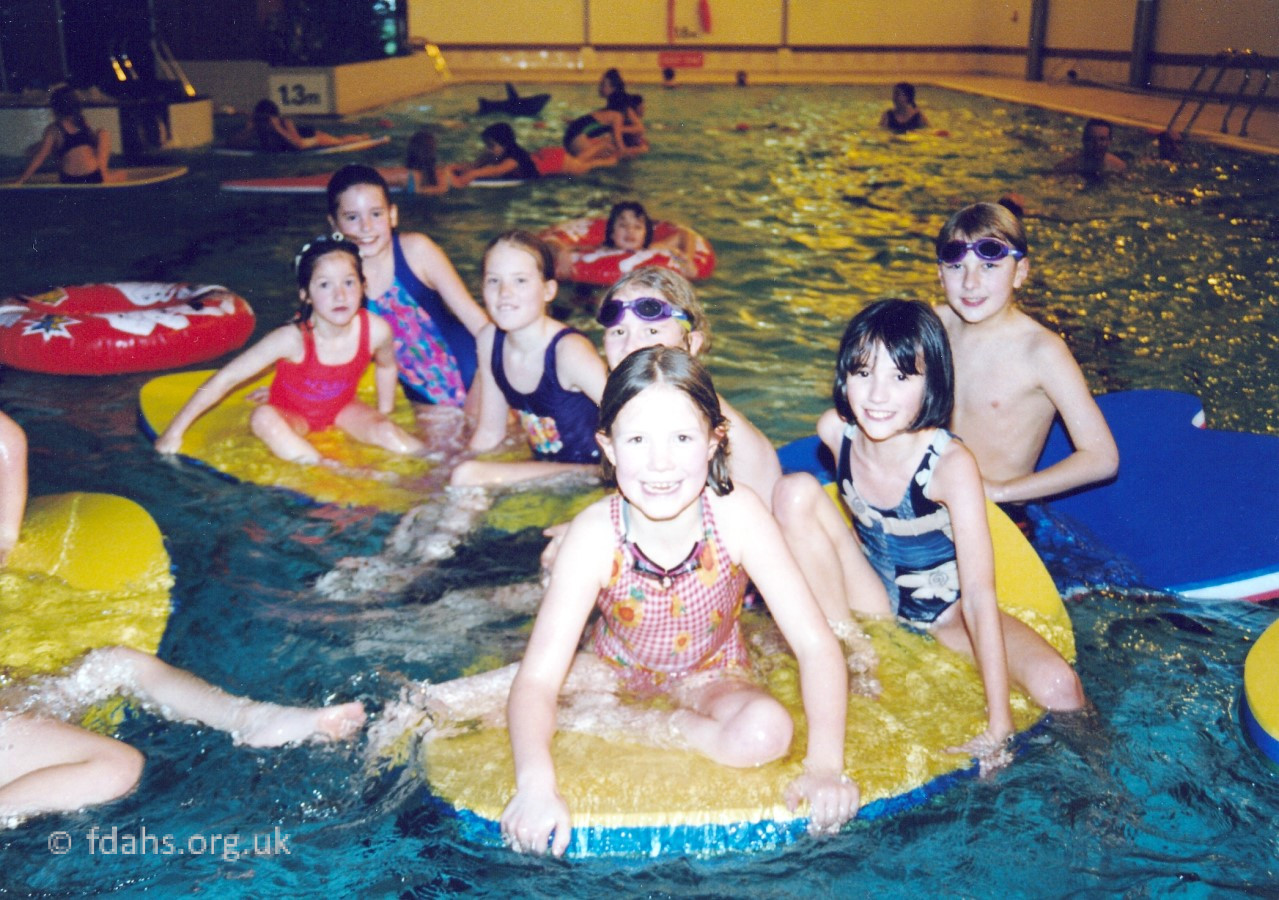 The facility for recreational bathing in Faringdon has had a chequered history but the story does have a happy ending. The first official swimming bath was developed 1900s to 1930s from an old bathing pond that was probably already in use for that purpose since around the later half of the 19th century; but it didn’t last for very long. The town had no indoor swimming facilities until 1998.

At the beginning of the 20th century a ‘Bathing Pond’ used to exist just across the railway line opposite Oriel Cottages where the RAC Trading Estate and Service Station on the corner of Park Road and Palmer Road are today. It can be seen labelled at the very bottom of this map from 1910 but is absent on a map from 1842.

The ground here at the bottom of Liddiard’s Fields was said to be waterlogged and marshy so the farmer may have dug out a pond to improve drainage for his fields during the later half of the 19th Century. It may then have been made use of by the local people but there is no evidence for this. It may have been the swimming pool shown below and just named differently on this map. The pool was however known to have been fed by a brook that first appears now as a mostly dry ditch starting just beyond the industrial buildings on Park Road and running along the side of the road up to the corner of Palmer Road, where it disappears under the new trading estate and service station. 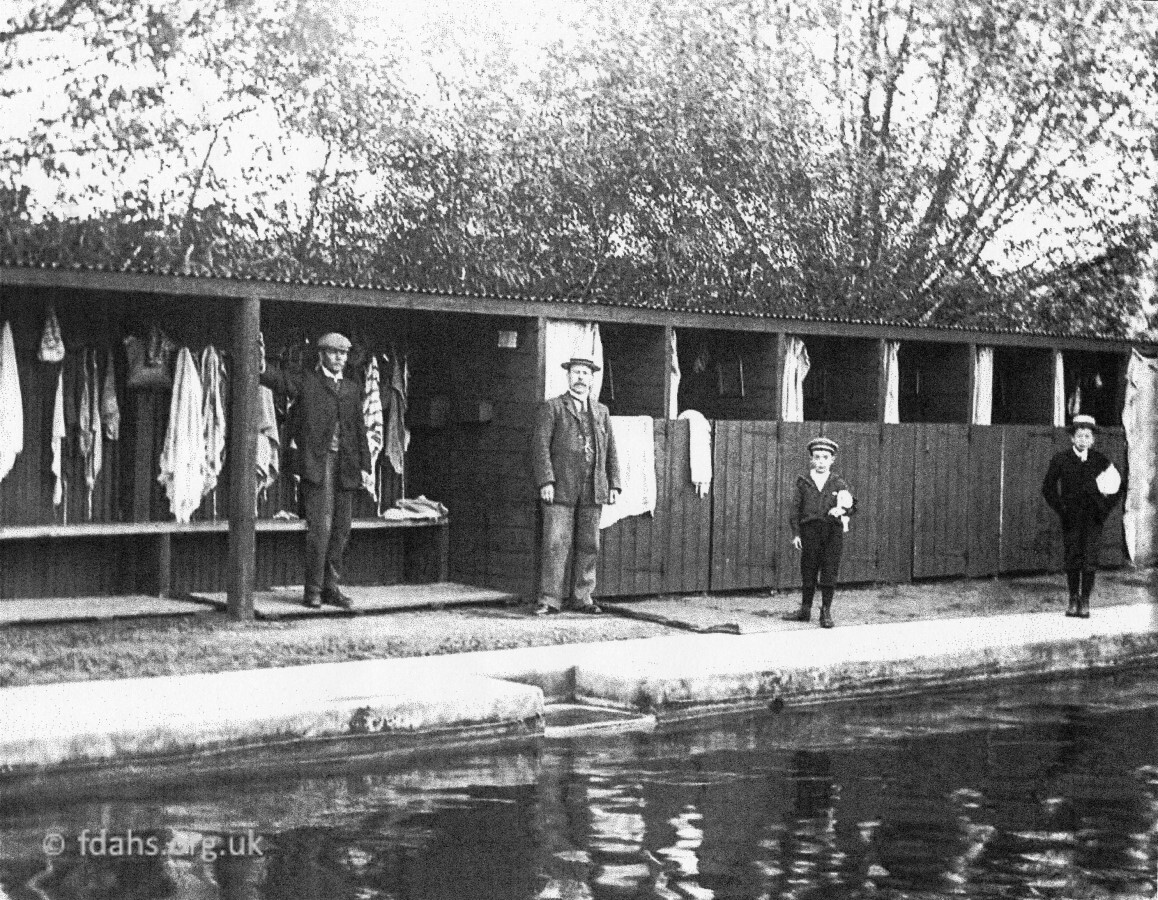 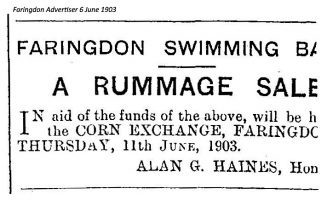 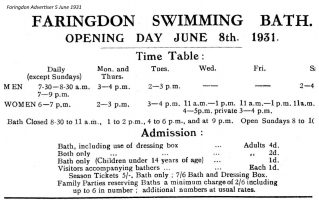 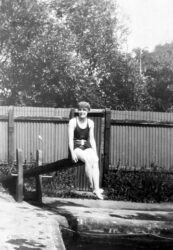 In 1903, the bathing pond, under the title of ‘Faringdon Swimming Bath‘ became the topic of the above advert in the local paper for a rummage sale in order to raise funds. The second advert shows that there was an ‘Opening Day’ planned for the 8th June 1931. However, the above photo from around 1910 suggests that it was already in use before that time. It was a proper swimming pool with paved surround, a spring-board, and ‘dressing boxes’ available for the changing of clothes. The lady sitting on the spring board at the pool in the mid 1930s is Dorothea (Dolly) Bowerman from Beaumont House at the bottom end of Coxwell Street (house demolished in early sixties). 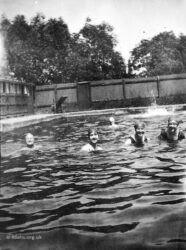 The four ladies in this photo of the pool have recently been identified as Kathleen Bowerman from Coxwell Street, and three Fletcher sisters, probably Edith, Ethel or Elsie Fletcher, and Lola Fletcher from London Street. Unfortunately the date of the photo is unknown but it was probably taken during the 1930s soon after the above advert when the pool was ‘opened’ and these ladies would have been in their 20s.

The pool was unheated, open to the elements and said to be occupied by newts and frogs. Nevertheless many learned to swim here and school children were taken by classes to the pool, no doubt marched in convoy along the muddy footpath extending across the fields from the end of Southampton Street.

Dennis Haynes of Faringdon replied to my query on social media: “My earliest recollection of the pool would be around 1940. It was near derelict then and was not in use. It was fed by a stream that ran along where Stickley Court is now and the water into the pool was controlled by a sluice and because, during the war, the sluice was no longer controlled, the ground at the bottom of what was called Liddiards Field became waterlogged and marshy. My Dad told me that as the water for the pool came largely from underground, it was always cold, the pool silted up and newts and frogs were often found in it.” 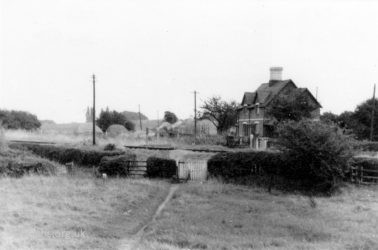 This photo taken in 1953 by Raymond Hutt, shows a footpath in the foreground, which is coming across open fields from the end of Southampton Street. It goes through a gate and across the railway line to Oriel Cottages and a track to the right to what was the end of Park Road at that time. The broken hedgerow and gate to the left of the photo indicates another footpath that used to lead to the swimming bath.

According to the local paper in March 1972 there were “open fields here leading down to a marshy area before the former railway level-crossing” but otherwise no mention of the swimming baths. There were also many complaints at that time about the lack of a pool in Faringdon and bus trips were arranged for swimmers from the town to go to Highworth.

The railway line has since become part of Park Road in order to join it up with the new A420 bypass (opened 1979) and the footpath on the left to the pool is now Palmer Road. The area around where the pool was located became a Coal, Coke and Timber Storage Yard in the late 1960s and in the late 1980s was concreted over for an industrial development called the ‘RAC Trading Estate’ and the Enterprise Service Station relocated from Coxwell Road. However, the brook does reappear from underneath the concrete, flowing quite steadily throughout the year on its original route, swinging around the back of the new Aldi supermarket, under the A420 bypass, and onwards through Shellingford to join the River Ock and henceforth to the Thames. 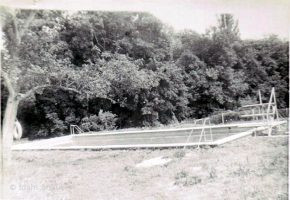 In 1957 a new open-air swimming pool was built in the grounds of what was then Faringdon Girls’ Grammar School at ‘The Elms’ on Gloucester Street; but it was for school use only. It later became accessible for public use, possibly in 1986 when it became Faringdon Junior School. However, it ran at a loss even with one of its busiest summers ever in 1989. Security was also a problem and cases of vandalism and theft of cash from the office were reported in the local press.

The pool eventually developed a leak in the bottom and would have been too expensive to repair so was finally closed in September 1997. It was tarmacked over to become initially a tennis court and now extra classrooms. Fortunately, a public indoor pool was soon to open at the leisure centre in Fernham Road.

(Swimming and water safety had been made a statutory element of the national curriculum for physical education in England since 1994. An Amateur Swimming Association report in 2014 stated that almost half of primary school children in England are unable to swim a length by themselves and that more than 1,000 primaries do not offer swim lessons, even though it is a skill on the national curriculum.) 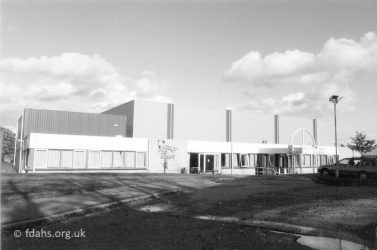 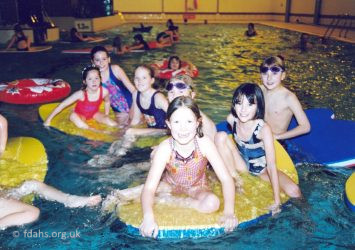 In 1990, the new Faringdon Leisure Centre was opened behind Faringdon Secondary School off Fernham Road. It was a joint project by the Vale District Council and the County Council, and managed by Crossland Leisure of Basingstoke at that time. The school was to be given priority of use during the daytime. In 1992, it was taken over by Contemporary Leisure, based in Bath. The centre is now managed by Greenwich Leisure Limited under the registered trademark Better, a not for profit charitable social enterprise (established 1993). They also have centres in Abingdon, Carterton, Swindon and elsewhere. Facilities included an air conditioned gym, fitness studio, squash courts, and a large 6 court sports hall for a variety of racquet sports and ball games but no swimming pool. There was a huge campaign by the town and all the counsellors to have a pool built at the leisure centre. A petition run by two local ladies got over 3,000 signatures, and the campaign was successful. In April 1998 a brand new 25m indoor swimming pool was opened. A sauna and a steam room were added later at the side of the pool. The colour photo was taken at a private birthday party held there just before the pool was opened to the public.