I am a very keen metal detectorist and I have 20 years experience in this wonderful and fantastic hobby. I have been searching for the illusive ‘pot of gold’ but unfortunately I haven’t been lucky enough to have found it yet!! 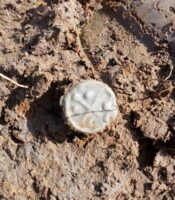 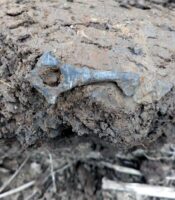 I went on another exploration with my metal detector in a field near Faringdon. I discovered a few fascinating items that I hope you find interesting. The first discovery was a lead token that dates to the Mediaeval period. (14th to 15th century). The other wonderful discovery was a bronze Medieval casket key that dates to the 13th to 15th century. The key is a delightful discovery because it probably belonged to a person who would have had a small wooden box to keep their treasured personal and valuable possessions safe. Lead tokens were issued by the wealthy landowners as a form of payment to the labourers. They could be used for the everyday purchase of food and ale, etc. Of course, they would have also been paid with normal currency. The lead token was used as a form of currency right up until the late 18th century. 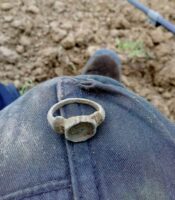 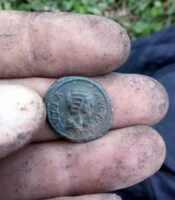 I went on an exploration with my metal detector in a field near Faringdon and I had some good luck this time!! My first discovery was a very nice bronze Roman finger ring which I can positively date to the 3rd or 4th century AD. The second nice discovery was a silver Roman coin called a Denarius. It is a coin of Julia Domna. She was the wife of the Roman Emperor Septimius Severus and he ruled the Roman empire from 193 to 211 AD.

[Editor’s note: Older people reading this may remember before decimalisation in 1971 that we had always used a ‘d’ derived from the Roman ‘denarius’ as the symbol for our penny, eg. 10d rather than 10p. Few questioned the reason why! It was the Anglo-Saxons that brought the word ‘penny’ with them from Germany after the Romans left us.] 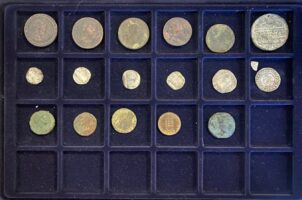 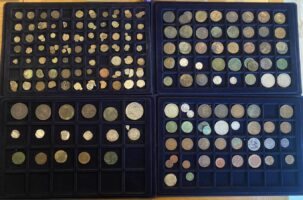 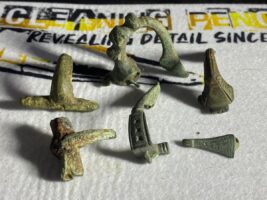 I thought I would share with everyone some of my amazing coin collection and Roman brooches that have been found around Faringdon and surrounding areas in the last 18 months or so. The coins range from Celtic, Roman, Medieval, Civil War, Georgian era and all the way to the present day. The Roman brooches date from 50AD at the start of the Roman invasion up until 443AD when the Romans left Britain. 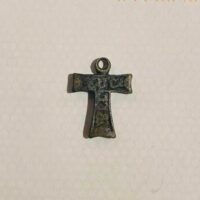 A complete late Medieval silver gilt cross pendant in the form of the Greek letter Tau, probably cast. The pendant is solid with an integral oval suspension loop projecting 3.5mm from its tip that is worn noticeably thin at the apex. The loop’s internal diameter is 0.9mm. Both faces of the cross are decorated with a design of trilobed leaves at each end of the arms, with a black letter script reading ‘IHS’ (‘Jesus’) across the arms and ‘MA’ (‘Ma[ria]’) running vertically down its body. This design is similar on each side but worn to different degrees. 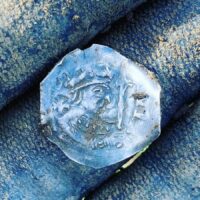 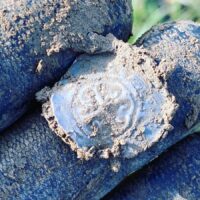 King Stephen penny dating from 1136-1145. This dates from the time of the first Battle of Faringdon during the The Anarchy. The reverse seems to read [+O][–]R[B?]OD:ON:OX, so this is a new moneyer for the Oxford mint, unless this is the same moneyer as that of a coin in the Royal Collection.

Disclaimer: It is assumed that all information contributed to the Society and posted here has been obtained under the following obligations: