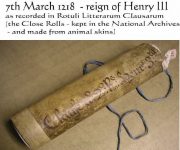 1218 – Faringdon’s Market Charter – On 7th March 1218 during the reign of Henry III. Translated from the Latin – “The Shire of Berkshire was mandated to grant that market trade be held on Monday at Ferendun (Ferendon) but not let it be a nuisance to other markets in the vicinity.” A market was probably held previously on Sundays. (* Faringdon was transferred from Berkshire to Oxfordshire in 1974.)

1313 – On 18th February 1313 the day for the market was changed to Tuesdays by another royal charter during the reign of King Edward II. Market Day in Faringdon has remained on Tuesdays ever since. (Did you know that Tuesday gets its name from the Anglo-Saxon’s god of war Tiu, Tyr to the Norse?)

Faringdon was situated on an important and ancient five-way road junction receiving traffic from all over the country. This led to it becoming a thriving market for the sale of agricultural and animal produce. It was especially known for the sale of cheese and pigs. In the journal of Thomas Baskerville he mentions passing through Faringdon and that ‘a great fair for horses, cattle and other goods, was held here on Whitsun Tuesday and that there were many inns in the town, the chief of which was the Crown.’ In 1813 ‘there was a great quantity of swine fatted in Berkshire and Faringdon slaughters 4,000 pigs for the London and Oxford markets between the beginning of November and the beginning of April’ About 8,000 sides were smoked annually in Faringdon before being sent to market. Edward Loveden’s dairy farm, at Buscot, used its surplus milk to rear the Berkshire black pigs and he sold them as breeding stock throughout the world. The Market Hall, shown in the photograph, was built in the late 17th or early 18th century and was used to sell butter, eggs and farm produce on market days. 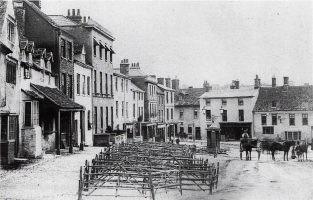 1880. Faringdon Market Place with pens ready for market. The first two buildings behind the pens on the left were a barber’s and a sweet shop, which have since been demolished. Notice the gas lamps on the Portwell and the London Street junction beyond. The pump and drinking bowl can be plainly seen on the north (this) side of the Portwell; it must have been well used on market day. 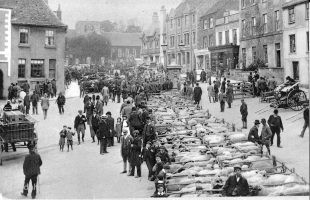 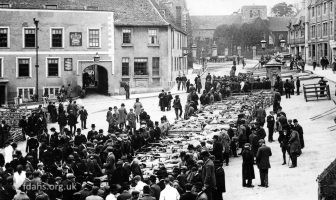 May 1904, a busy Market Day with sheep, pigs, goats, chickens and geese sold in the Market Place, and horses and ponies beyond the Portwell. Note the changes in the shop fronts from the previous photograph. Still  remembered today are Mr ‘Minnie’ Goodman and George Hughes, Town Crier, who erected the hurdles for the market and cleaned up the square at the end, a very necessary job. On the right the man with the bowler hat is Richard James. 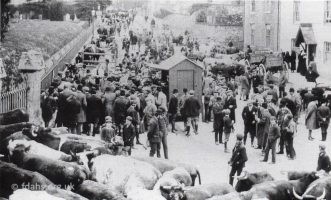 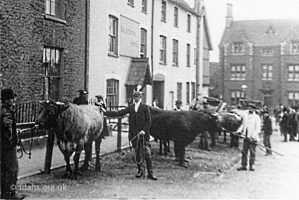 May 1904, the Cattle Market was around the corner further up Church Street near the church.. A crowd of men and boys are hanging around the auctioneer’s hut. Milk cattle were enclosed near the Church gates while the dry and store cattle were tethered to rings in the wall further along. Bulls were tethered on the opposite side beyond the Salutation Hotel. Note the railings on the churchyard wall which were removed during WWII to help the war effort; the wall is now Grade II Listed. 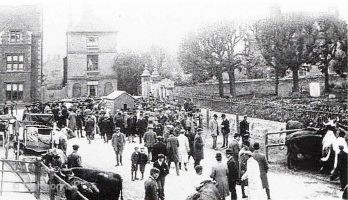 Looking back towards the auctioneer’s hut from further up Church Street. During the early 19th century, pigs were an important part of Faringdon’s economy. In 1809 no less than 4,000 hogs were slaughtered and cured in the town. In the early 1930s the Cattle Market was moved to a new site on the corner of Church Street and Coach Lane. It was not until the late 1940s that the sheep and pigs were moved to the same site. 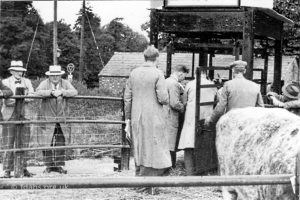 1953. Up at the new site on the corner of Church Street and Coach Lane, the old fire engine house can be seen in the background. Left to right: Mr Chambers, snr; ?; Frank Chambers, auctioneer; Philip Wentworth, a butcher from Stanford in the Vale and Official Grader at the Market; Dick ‘Jammy’ James; Guy Weaving, farmer. 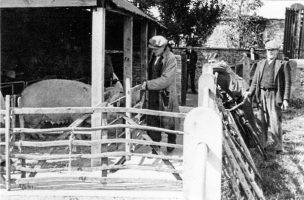 1953. George Miles leans on the wall watching Minnie Goodman pen pigs in Church Street. A policeman stood in Coach Lane every Market Day to organise the traffic, and to watch for cruel treatment and to observe movement orders for the animals.

The following photographs were taken of Tuesday market day in later years, 1970s, 1978, 1982, 1994 & 2001. Still a farmers’ market but livestock have long since stopped appearing and purveyors of more general wares now pitch up too. 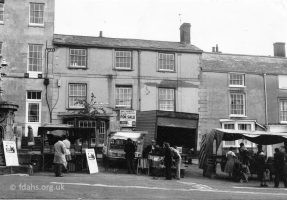 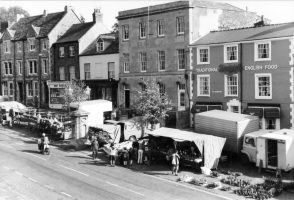 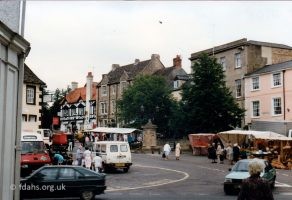 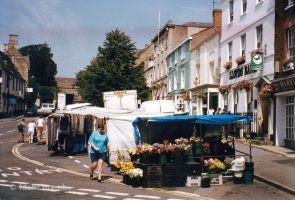 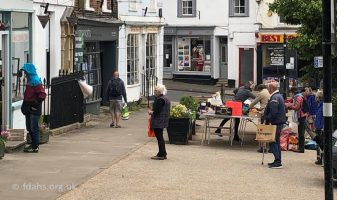 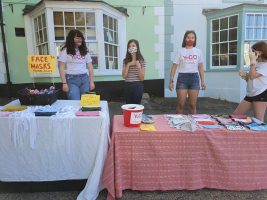 In late January 2020, a coronavirus disease called COVID-19 arrived in the UK, as it spread around the world, a pandemic bringing massive consequences. On 16 March, we were told that “all unnecessary social contact should cease”. On 23rd March, the UK government imposed a stay-at-home order – practically the whole country shut down for months on end, a few essential shops remained open and only people in essential jobs went out to work. Britain was in lock-down. The streets became deserted, both of people and traffic. Only one person was allowed out to get shopping and a distance of 2 metres from any other person had to be maintained at all times. By August, there had been over 300,000 cases and over 41,000 deaths in the UK, the worst hit of any other European country. The rate of infection had fallen to almost nothing that summer so things eased up, with the result that by December 2020 the total number of cases shot up to 1,500,000 and 55,000 deaths. By the end of the following year, following an intensive vaccination programme, there were over 15,000,000 cases and over 150,000 deaths.