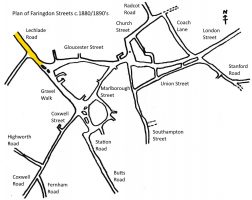 Views of Lechlade Road in the 1900s 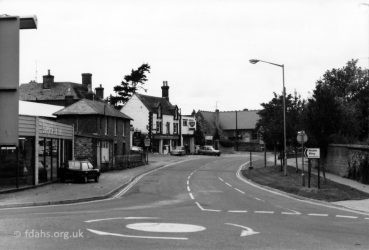 1982. Lechlade Road at junction with Gravel Walk (left) and Gloucester Street (behind). Aunties Emporium at #1, then private houses, followed by the Duke of Wellington public house (closed 2012), Enterprise Garage (BP sign, demolished 1988) then Faringdon Infant School on the corner of Canada Lane. 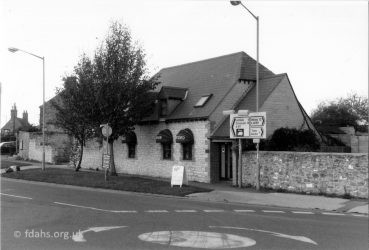 1995. The other side of Lechlade Road. Gloucester Street is to the right and Gravel Walk is behind. The building opposite the roundabout is #2 Renaissance Hair & Beauty Salon, which was RAC Electrical in 1973. The entrance to #4 the Quaker Chapel is to the left of it.

1982. Lechlade Road looking back towards the junction with Gloucester Street and Gravel Walk. On left is the entrance to the Quaker Chapel at #4. The large showroom window on the right at #1 was originally the site of Arthur E. Baker & Sons (est. 1907 – to at least 1973), builders & decorators, blacksmiths, wheelwright, funeral directors, monumental masons, and private chapel of rest. The last blacksmith was Cecil Drew and the last mason was Ken Baker. It became a car showroom, then a pine furniture shop and finally an antique centre, Auntie’s Emporium. The next house is the Llott family home, previously a small sweet shop run by Mrs. Hunt and followed by her daughter Mrs Llott. The Duke of Wellington pub is off photo to the right. A business advertising fertilizers for sale and owned by W. Indge was somewhere here in 1919.

Two miles down the Lechlade Road there is a turning on the right to a small village on the banks of the River Thames called Eaton Hastings. A mile further, on the left is the entrance to Buscot Park, which is now owned by the National Trust. Another half mile, and on the right is the turning to Buscot village and Buscot Lock. These places were the subjects of an article in the Faringdon Advertiser 17th August 1962. Further on you cross St.John’s Bridge and arrive at the ancient riverside town of Lechlade.

The following shops and businesses were advertising as Lechlade Road, Faringdon in the years stated: 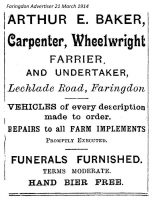 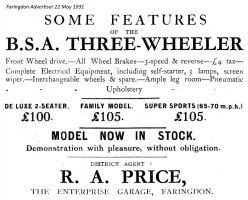 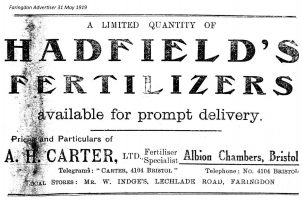