During Wednesday 6th May and Tuesday 2nd June 1953 a variety of events took place in the town to celebrate Her Majesty Queen Elizabeth II’s Coronation. The coronation on 2nd June 1953 was when she was officially crowned; she actually became queen when her father, King George VI, died in February the year before in 1952.

The celebrations in Faringdon kicked off with a football match against Swindon Town in Tucker’s Park. Other events were a production of ‘Beggar My Neighbour’ by Faringdon Dramatic Society, a street carnival procession and ball, square dancing, old tyme dancing, darts tournament, whist drive, and an open-air church service in the Market Place. On Coronation Day, the Market Place was the scene for a pig-roast, an afternoon children’s tea party, followed by dancing until midnight. 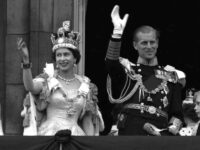 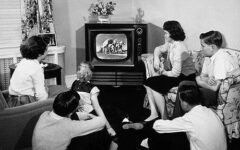 Very few people owned or could afford a television set in those days and many thousands were sold or hired especially to watch the coronation. (Even then only about a third of households had one by 1956.) Those that did have one were invaded by friends and family to watch the coronation being broadcast by the BBC (bearing some relevance to the afore mentioned play presented by Faringdon Dramatic Society). There was also a television made available at the County Grammar School for Girls in The Elms – all persons 60 years and over were invited.

With thanks to Eileen Merritt for providing her copy of this souvenir programme.