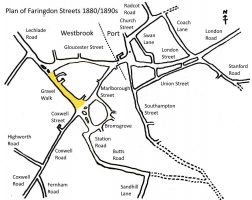 Gravel Walk connects Coxwell Street to the Lechlade Road and thus acts as a bypass for the town centre. 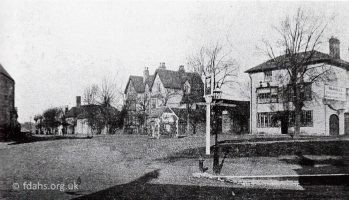 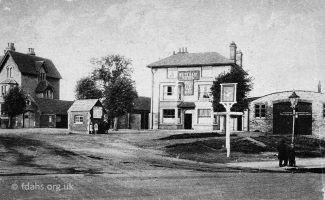 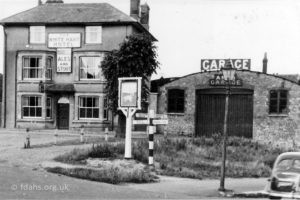 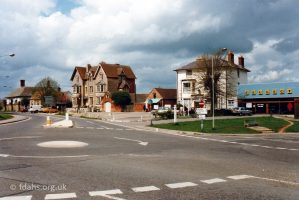 1910, 1940s, 1953, & 1987. Four photographs showing the top corner of Marlborough Street looking down Gravel Walk. In the first photo, the White Hart Hotel is on the right. Just in front of it can be seen a small building which was the public weigh-bridge (more visible in the second photo). The small buildings beside the pub have had a variety of uses including storage, Boffin’s butcher’s shop and Aladdin’s Cave, Book Corner, and an antique centre. The other large building shown further down the road, called The Lindens, is still there and has now been converted into three houses. The second and third photos show Ann’s garage next door to the pub in the 1940s and 50s. The garage was later demolished, certainly by the 1980s, and is now the Faringdon Garage (Peugeot) showroom. 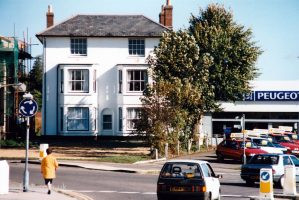 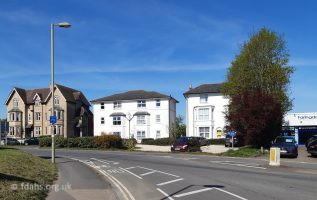 1990s. By this time the hotel had been closed and had become a long-standing eyesore. Permission was given in 1993 for the hotel to be converted into six flats and to replace the outbuildings with five new houses. Also, all the old buildings and weigh-bridge shown earlier were demolished to make way for a large block of flats, shown here just visible under construction in the first photograph. As can be seen in the later photo taken in 2020, the new building was built to closely resemble the old hotel building. A new road, called the White Hart Walk now exists between it and The Lindens, giving access to the new houses behind. 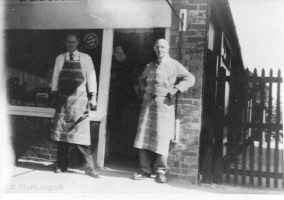 pre 1977. Boffin’s butcher’s shop on Gravel Walk next on the left of the White Hart. Standing outside are Lewis Boffin and Thomas Boffin, his father. His first shop was in Station Road but that was demolished so they moved here. In 1977 they moved to #7 London Street and the shop became Aladdin’s Cave, an antique centre. The shop was later demolished to make way for a large blocks of flats. Boffin’s butcher’s shop in London Street finally wound up when Lew retired and it became a fish and chip shop. 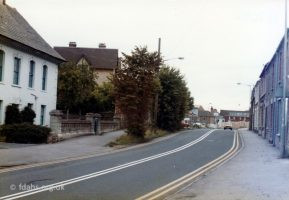 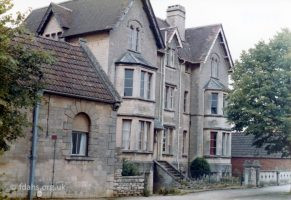 Looking back towards the junction with Marlborough Street, Station Road and Coxwell Street. The white house on the left is Westbrook House, a Grade 2 listed building, and next is The Lindens showing above the trees. The Wrens were billeted in Westbrook House during WWII; they had to march up to the Royal Marines Camp off Butts (now Park) Road each morning. The Lindens, in the second photo, also shown in many of the previous photos, was once the home of at least two of Faringdon’s most eminent solicitors. It has now been converted into three houses, #8-12 Gravel Walk. 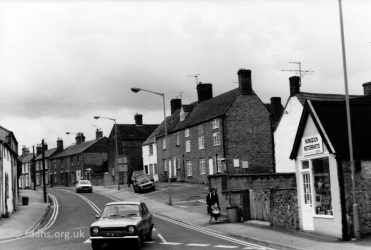 1982. Looking back along Gravel Walk from the junction with Lechlade Road and Gloucester Street. On the right was Faringdon Motorparts owned by Ian Stringer. The garden wall was later removed to make room for a parking area. The shop was closed and demolished in 2014 to be replaced with an extension on the house behind. The house, known as Chase House, was previously occupied by Mr & Mrs Indge, coal merchant and hairdresser. At the next lamp post on the right is the turning to Faringdon Bowling Club, which used to lead to the Town Pound. Quickly following this is another turning to a row of old white terraced cottages. Then at the next lamp post on the right, opposite the white car is a public footpath up the side of that white house, leading to Oakwood House (sheltered housing) and Ferendune Court (care home) on the new Pines Housing Estate, which has vehicle access only via Canada Lane. The small arch in the wall just behind the white car is an entrance to a row of old houses.

The following shops and businesses were advertised in Gravel Walk, Faringdon in the years stated: 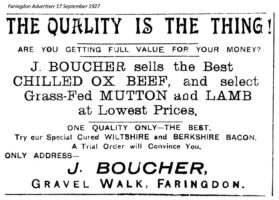 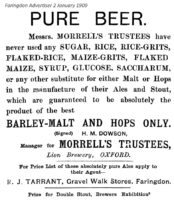