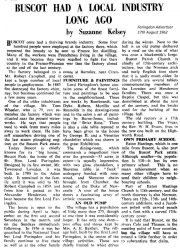 Buscot lies close to the River Thames, 4 miles north-west from Faringdon on the right-hand (north) side of the A417 road to Lechlade. The 2011 Census recorded the parish’s population as 173. The village is part of the Buscot and Coleshill Estate, which totals some 7,500 acres comprising of 11 farms, 290 acres of in hand woodland, and 550 acres of woodland let to the Forestry Commission. The estate, including the villages of Buscot, Coleshill and Eaton Hastings is now almost entirely owned by the National Trust (only 4 houses are in private ownership), a total of 151 cottages.

This page includes Buscot Village, Buscot (by the Thames), and Buscot Lock & Weir. On a separate page is Buscot House & Park, which is on the opposite (south) side of the A417 road to Lechlade and before reaching the village of Buscot.

Buscot today has a manor house, an ancient village hall with a clock tower and covered well, tea shop and adjacent car park, and a children’s playground. All situated near the start of a side-road off the A417 road to Lechlade, which also leads to Buscot Lock & Weir and Brandy Island on the River Thames. 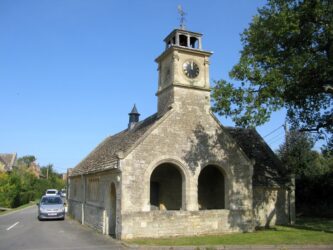 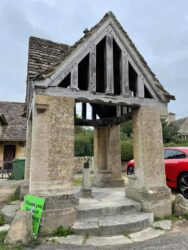 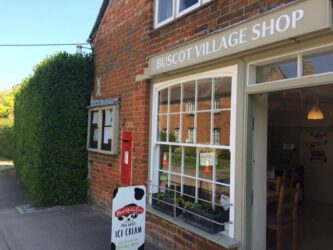 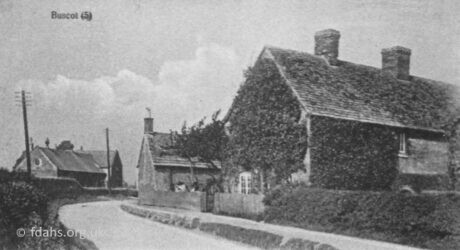 1950s. On the A417 just beyond the main village and looking towards Lechlade is a small group of buildings. The building in the distance is Buscot School, which was pulled down in the 1960s/70s. It was on the turning into Snowswick Lane, which leads to Buscot Wick and Coleshill.

Buscot (by the Thames)

1876 Map of Buscot by the river. On the left is the A417 road to Lechlade and bottom right is the road, Snowswick Lane leading from the village. Two islands can be seen here, the lock island (see below) and across the weir to Brandy Island. A lock keeper’s cottage, water wheel and irrigation pump-house are at the bottom of the island next to the weir. Also on the island are a Cake Factory/Oil, Berkshire Distillery, Gas works (Private), Manure Works (Artificial), and Vitriol (sulphuric acid) Works. The distillery was opened in 1869, when sugar beet from the farms around the estate arrived by a narrow-gauge railway with over six miles of track. It lasted for only 10 years. The railway can be seen on the map to cross over a bridge below the lock and then over the weir itself. Half a mile downstream from Buscot Lock was Buscot Wharf, a canal was cut to the warehouses a little to the south of the river. A little further upstream, where the river flows close to the main road used to be Buscot Cheese Wharf where two to three thousand tons of cheese were annually sent down the Thames. All this and much more4 was achieved by Robert Tertius Campbell who having made his fortune in the Australian gold rush as a gold trader, came to England in 1859, purchased the whole semi-derelict Buscot and Eaton Hastings estate for £125,000 and spent his entire fortune on turning it into a model agricultural wonder. He died bankrupt in 1887. He was a popular and extremely innovative man for his time.

By the side of the river just upstream from Buscot Lock and Brandy Island are the parish church and old parsonage or rectory. They can now only be accessed via another turning that is about half a mile further down the Lechlade Road from the village. 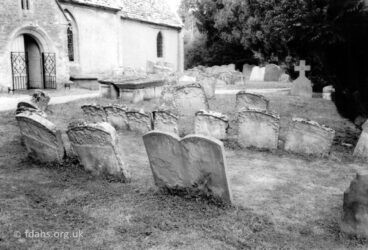 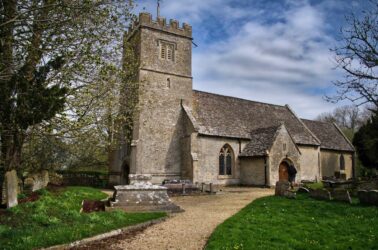 1985 & 2022. St. Mary’s Church was built in about 1200 as seen by the Norman arch and early English font but it is chiefly of l5th-century architecture. In the church are several tablets commemorating members of the Loveden and Henderson families, who were once owners of the Buscot Estate. There was once a Baptist Chapel, but this was demolished at about the turn of the century, and the bricks used for the building of the village hall. 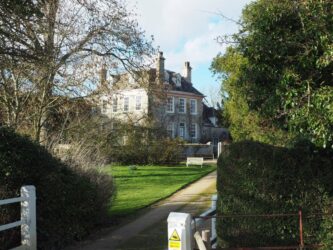 The Old Parsonage or Rectory, near the church is a large mansion built by extending an existing building on the site with local Cotswold stone in 1701-03. It is a Grade-II listed building. Beside the house is a small walled garden. The house is two storeys high with an attic and cellar. It has a facade five bays wide, arranged symmetrically under dormer windows. It was later sold and is now a private tenanted property. A former occupant was Peter Francis Carew Stucley (1909–1964). In his will, Stucley specified that the house should be rented furnished to American citizens actively pursuing literary, artistic or academic studies. The Vicar in 1962 was the Rev. W. H. Evans and he lived in a new rectory built on the Highworth Road. 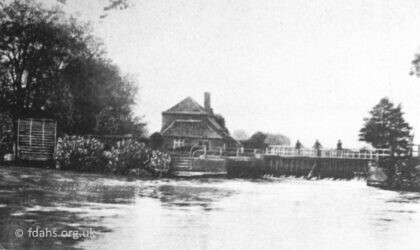 c1913. Buscot Lock & Weir. If dated correctly, the old weir had just been renewed by Lord Faringdon of Buscot Park in 1909. Robert Campbell’s water-wheel, twelve feet high and sixteen feet wide can be seen on the far left of the photo. It weighed over twenty-five tons with a number of iron shell-like blades. A photo of the same scene taken in 1888 shows a pump shed attached on the left side of it. Its purpose was to pump water to provide irrigation for the surrounding fields. I assume that the stream that runs the wheel and creates Brandy Island may have been cut specifically for that purpose around the 1860’s, but I have found no specific evidence for that.

The lock keeper’s cottage was built at the bottom end of Brandy Island in 1791. Beneath the floor of the cottage were ‘fish stews’ – deep ponds fed with river water and stocked with fish for sale. The large and deep pool in front of the weir has become popular in the summer for bathing and there is also a large green picnic area from which the photo was taken. In 1885, it was reported that “There is a very fine tumbling bay on the farther side of the weir, and a sharp sweep of swiftly running water coursing over a gravelly shallow, upon which the trout come out to feed at eventide, and the silvery dace and bleak poise in happy security during the long summer days.” 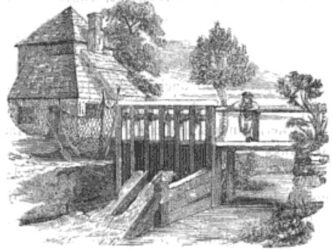 1834. This drawing shows the same building but a smaller weir and flash lock, where paddles at the side would be lifted to allow boats to ‘run the rapids’ downstream or be manually hauled upstream.

The new pound lock, built in 1790 is off to the right of the photo in an another channel (which was probably dug or cut specifically for the purpose – see map dated 1876 above). A new cut containing a lock acts as a bypass with a slower flowing stream separated from the main flow of the river passing more swiftly over the weir. The lock was a manual beam-equipped pound lock, ie. water impounded between two sets of gates, just as it is today. A toll of 2½d (1p) per ton was charged to pass through the lock.

Some sources state that in 1979, a new cut for a second weir was created across the fields to the north. However in 1910, Charles G Harper writes in his book ‘Thames Valley Villages’ that going upstream toward the lock: “The Lock has a new weir cut through the field on the Right bank. The old weir is on the Left bank.” It does seem strange that such an expensive exercise would have taken place as late as 1979 after the demise of freight transport by river many years earlier. Many sources also state that the southern weir (the old weir) was constructed in 1979; perhaps it was just rebuilt along with the northern weir. 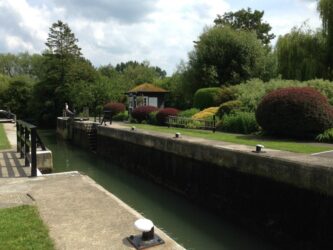 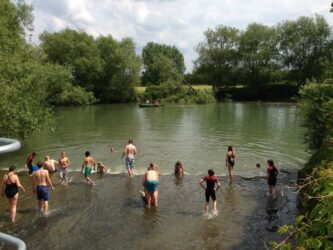 The lock as it is today and the old, now updated weir with its backwater downstream that has become a popular summer resort.