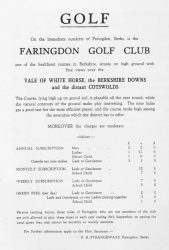 In 1921 it was proposed that the old course of the Golf Club, at Wicklesham, be given up and a new one created at Haremore on land rented from Mr Raymond Adams for £10 a year. Donations from members were promised to meet the expenses, however in the following year the rental was raised to £40. Feeling that this was too expensive the members tried to negotiate a reduction. This was achieved and the cost fell to £30 a year. It was recommended that the Beechey brothers be employed at 1/- (5p) an hour to look after the greens. In 1924 it was decided to see if the course could be transferred to land owned by Captain Stevens of Wicklesham. The lease was then taken on for 21 years with a penalty if the club was closed before the lease ran out. In 1925 the club obtained the services of an excellent groundsman who took a very keen and practical interest in his work and the expectation was that he would remain with them to see the necessary improvements carried out as the years went by. His name was Percy Butler and he remained with them until1938, living in Oriel Cottages. At that time a horse drawn mower was employed to mow the grass.

The members competed for the Berners Cup and the Wicklesham Bowl with the ladies vying for the Ladies’ Cup. Their social events mainly consisted of bridge drives and an annual dance. Additional money was raised from the profits of the bar. In 1931 Lord Berners requested permission to land his light aeroplane on the course, this was granted provided no damage was done. In 1932 the financial affairs were in disarray but at the A.G.M. they thanked the groundsman ‘for the wholehearted work he put on the course. He worked day and night and put in far more work than ever he was paid for’. In 1934 it was acknowledged that the work that Percy Butler had put into the course had kept the club going as the state of the greens was vital to attracting players. In 1936 he was allowed a week’s paid holiday. By this time the future of the club was in the balance. Mr R. G. Adams stated that ‘If the club does go, I don’t think there will be another in Faringdon for at least another generation.’  By August 1938 the deficit was too large and after an arrangement with Captain Stevens about not paying the penalty for breaking the lease the club was wound up. The Berners Cup was donated anonymously to the Old Berks Hunt for use as a Challenge Cup in local Point to Point Races in 1947.