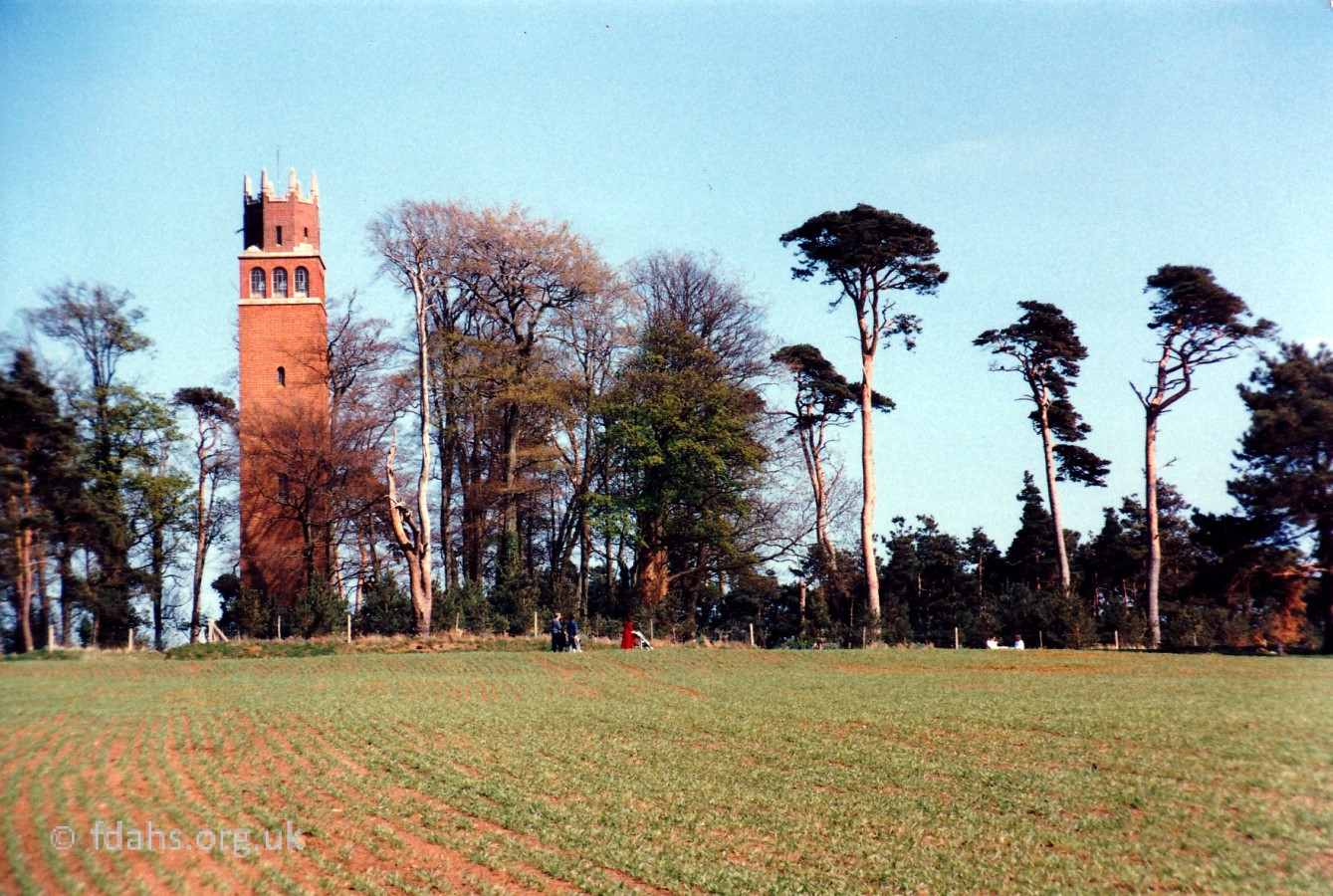 The Folly Tower is 100 feet high (a 6-storey house) and parts of six counties can be seen from its top. It was built during 1932-36 by the 14th Lord Berners (1883-1950) a wealthy and eccentric bachelor. On the door to the tower was a sign that read ‘Members of the public committing suicide from this tower do so at their own risk’. It is the last major folly tower to be built in Britain. The grand opening was 6th November 1936 to commemorate his companion, Robert Heber-Percy’s birthday. Robert Heber-Percy (1911-1987), who inherited Faringdon House and estates following the death of Lord Berners and gave the tower and woodland to the town in the 1980s. 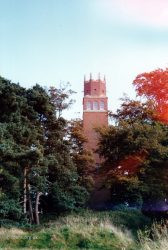 The tower was built on the site of first a Celtic ring camp, then a medieval castle that was built in c.1144 for the rightful Queen Matilda (Empress Maud). The castle was stormed and taken the following year by her cousin King Stephen during the early civil war known as ‘The Anarchy (1139–1154)‘. In digging the foundations of the tower, some skeletons were found which were dated to the period of the later ‘Civil War (1642-1651)‘. It is believed that Cromwell positioned his battery here in order to bombard Faringdon House. He certainly managed to destroy much of London Street and knock the tower off All Saints Church. After the discovery of the skeletons, further archaeological excavations by E.T. Leeds revealed a single rampart and two ditches surrounding a central keep belonging to the medieval castle. He also discovered pottery of a later period on the site. 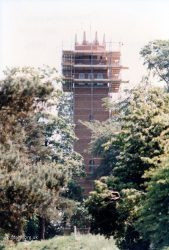 During WWII the tower was used as an observation post by the Home Guard. A German spy was arrested there while watching activity on the Brize Norton and Fairford aerodromes, and so the tower was bricked up. For some years after the war access was allowed but, due to vandalism, the tower was bricked up again. It was restored by Mr Robert Heber-Percy (1911-1987) in 1982/83 and occasionally opened to the public. Further repairs were necessary in 1996, when the whole thing was covered with scaffolding.

Faringdon Hill, as it was recorded in a document5 published in 1863, was also known as Folly Hill long before the tower was built, possibly getting its name from the Norman French ‘feuille’, meaning leafy or perhaps from the earlier Saxon ‘fiæli’, meaning autumn. The original Scots pines were planted by Sir Henry James Pye (1745 – 1813) in about 1790. He was considered ‘the worst Poet Laureate in English history’. He wrote ‘Faringdon Hill’ in 1774 with reference to the battle at Faringdon – ‘Contract the prospect now and mark more near Fair Faringdon her humble turret rear, Where once the tapering spire conspicuous grew, Till civil strife the sacred pile o’erthrew.’. In an ode for the King’s birthday he referred to so many allusions of vocal groves and feathered choirs that it resulted in the nursery rhyme ‘Sing a song of sixpence’. 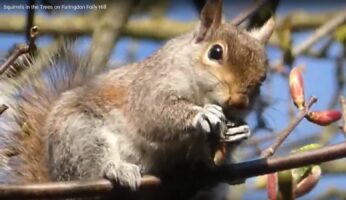 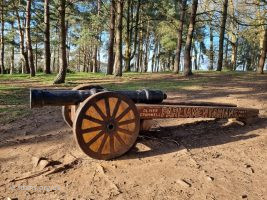 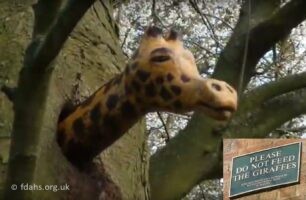 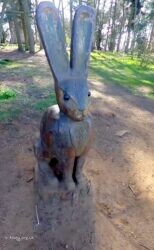 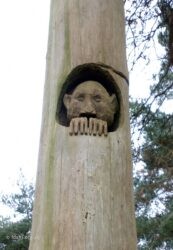 The last owner, Robert Heber-Percy helped set up the Faringdon Folly Tower Trust in 1982 and handed the tower over to the town in 1983, a few years before he died. It was in good order but there were no funds to maintain it, nor for it to be opened to the public. A small group of volunteers managed to raise some money in 1988 and the tower was opened to the public on the first Sunday of every month. The woodland covering the top of the hill and the tower are now privately owned by the Faringdon Folly Tower Trust and maintained and opened by volunteers. Since 2010 they have developed the woodland to be “a place that offers a good deal of interest and fun whether the tower is open or not”. The tower is open to the public on a Sunday, just twice a month during the summer. Among the added curiosities are a wooden cannon commemorating Oliver Cromwell in the Civil War, which points at Faringdon, plus a carving of a giraffe, a hare, and er… something else. The squirrels are real. 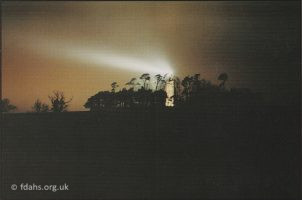 The Millennium Beacon – The idea for the Millennium Beacon came from Peter White, local electrician. He obtained permission from the Folly Trust to erect the beacon on the tower. He also visited local businesses for sponsorship. The total cost of the beacon, £5,860, was raised by these local businesses and by money taken during the open weekends while the beacon was lit. Many people from all over the country came to see it for themselves. The beacon was visible for miles around and permission to erect it had to be sought from the various authorities concerned with aspects of safety, light pollution and aircraft control. It became an officially registered lighthouse. Unique and utterly pointless, it was the only lighthouse that couldn’t be seen from the sea. 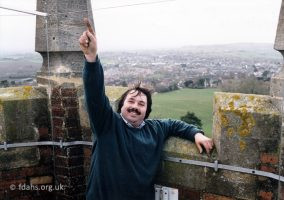 A temporary test light from a 1960’s Chieftain tank was mounted on a wooden frame with an electric motor and tilting device. This was placed on the top of the tower and Peter toured the local area to see how visible it would be. The dome was made by putting a mould round a 4ft diameter balloon, then a steel structure covered in aluminium was attached. The complete construction was 17ft tall. It was winched up the outside of the tower to the top and installed for operation on Christmas Eve 1999. The beacon used a 1,000 candle power narrow beam floodlight with the light rotating on a horizontal plane. A team of people helped with the various aspects of the venture, so special thanks go to James Forbes, Nick Foot, Chris Holley, Anthea Kemp, Marion Webb, Trevor James and his workers from Multi Agg. 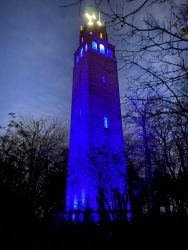 The Winter Festival Beacon – Every year since the millennium, December through to March, the Tower has again become a powerful beacon of light. The colours and effects are different every year, maybe a random searchlight or giant white star.

Town Tribute to the NHS – In 2020, the giant white star (photo) stayed on beyond the end of March and into the following year. For a few(?) nights the tower was also bathed in blue light. A token of gratitude from the town of Faringdon for our front-line NHS staff during the Coronavirus pandemic when the whole country, and most of the world was locked down, off and on, well into the following year.