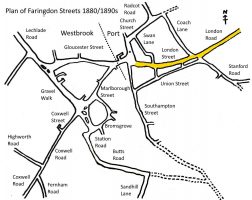 London Street heads east from the town centre of Faringdon. It is one of the roads that made Faringdon the important five-way road junction of the past. It was once part of the main road (A420) to London via Oxford before the bypass was built in 1979. London Street was referred to in a deed of 1689 and at various times up to the late 18th C. when it changed its name to Bull Street after a public house in the street at #27. By 1881 it was being referred to in a deed as ‘London Street otherwise Bull Street’. An Ordinance Survey map from 1876 shows ‘London Street’ up to the Stanford Road turning then ‘London Road‘ beyond, although the latter does not seem to be used in postal addresses.

Views of London Street in the 1900s 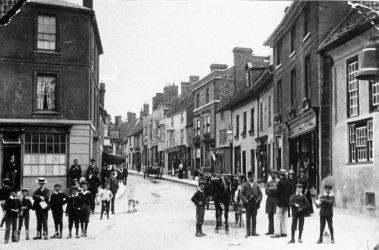 c1895. A Henry Taunt view of London St. Possibly a market day because of the number of people around. The building on the left is the office of Haines the solicitors, now the Cheltenham & Gloucester Building Society. The shop window halfway up on the right is #10 Chamberlain’s grocery shop, beyond is a bow window belonging to #12 Hughes’ the paper shop. The Bell Hotel is on the right-hand edge of the picture then a draper’s shop, owned by Creese & Co. in 1895. Both the latter premises are addressed as being in the Market Place. 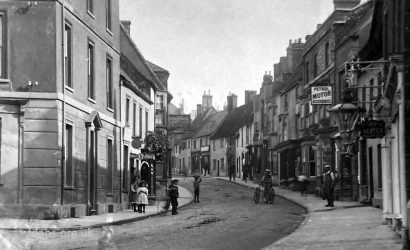 A little bit further into the start of London Street, a cycle shop with no visible name at #3 can be seen on the left. It changed owners, amongst which were Yates & Sons, Rogers by 1919, Rigden by 1931, followed by Geary then Huxley. Further up is the sign for the Wheatsheaf Hotel. On the right at #6-8 is an ironmongers with a sign saying they are selling petrol and motor accessories. The Anns family had an ironmongers and gun repair shop here since 1824 and moved to have a garage in the Market Place from about 1900. Right up the street on the right can be seen the sign for the Star Inn. 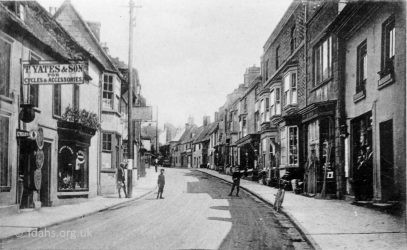 c1910s. The cycle shop at #3 is according to the sign here run by T. Yates & Sons. Further up the street is #5 the Wheatsheaf Hotel; #11 Jamieson, tailor (later the Electricity Board Showroom); #13 Moyne, ironmonger; #17 Comley, furniture; the junction with Swan Lane; #19 ‘Marlborough’ public house; #21 Obourn, shoe shop and hairdressers. The ironmonger’s #6 on the right is in the occupation of Mr Percy Thomas; this was later taken over by Mr Moyne. During WWII it was a sweet shop called Shenton’ s. 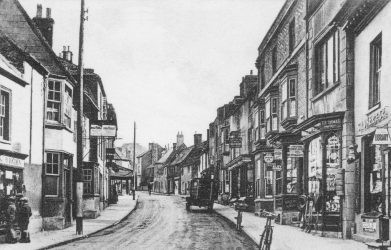 1930s On the left #3 B.Rigden now has the bike shop, then The Wheatsheaf (public house). On the right #4 Luker (newsagent, printer & Faringdon Advertiser producer) until late 1930’s. The shop with three bay windows is #6-8 T.P.Thomas (ironmongers). The shop with the longer bay window and truck outside is #10 Chamberlain & Sons (high-class grocers) since 1910. Its frontage was moved back in 1938.