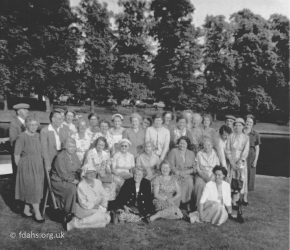 The first meeting of the Silver Threads Club was held in the Baptist Schoolroom on 14th November 1952, other venues have included the Congregational Hall, the United Church and the Corn Exchange. The club started with a membership of 25 and has increased over the years. The oldest member was Mrs Sarah Elliott who continued until her death in 1963 at the age of 95. Over the years the club has had a choir, held social meetings, dinners, bring and buy meetings, concerts, visited places and entertained other clubs.

The following article was published in the first issue of the new Faringdon Venture newspaper in January 1972:

“The Faringdon Silver Threads Club was founded in 1952, and the Choir the following year. We have a membership of 90, a few of these being adopted members (who receive gifts at Christmas time). The Club meets every Friday afternoon in the Bowling Club Pavilion. These meetings take different forms of entertainment, e.g. visiting choirs, speakers, film shows. demonstrations, cards and bingo. The membership fee for the year is 12½p, and each person pays l½p on Club days for tea and biscuits. The Club runs a Christmas draw, and for this we are deeply grateful to the tradespeople and others for their gifts of prizes. We also hold a bazaar and a rummage sale each year, and again we would thank the townspeople for their patronage. A few monetary gifts to the Club (including a generous gift from the Round Table) have been made by various organisations which enable us to keep solvent.

A free day’s outing in the Summer is provided for each member making 20 attendances or more, and at Christmas time a tea is provided and 50p is given to each member having made at least 20 attendances through the year. The Club holds a Birthday dinner every year in November. and some form of entertainment is provided following the meal. Under the “Fish”‘ scheme. our members who are unable to walk the distance to the Club are provided with transport.

The Choir consists of 16 members and we are always open for new singers. Each member of the Choir pays 2½p per week, and this enables them to have a coach outing in the Summer. From September to June each year the choir meets one afternoon per week for practice. and they visit other “Over 60” clubs within a fairly wide area most weeks to entertain them.

We are indebted to the Bowling Club for the use of their premises.”

Another high point of their activities was that every year they were provided with a splendid strawberry tea in the Orangery at Faringdon House by the then owner, Robert Heber-Percy (1911-1987).