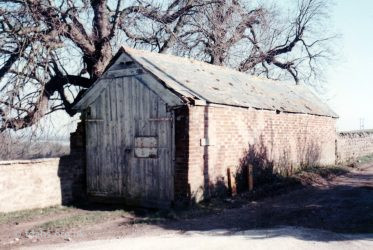 The town’s first fire fighting appliance, the parish pump as it was called, belonged to the parish and was originally housed in this garage at the end of Church Street. The garage is marked on a map surveyed in 1876. It was in use in 1877 when the Captain was a H. Newbery Arthur and in 1883 was John Rixon. The building, which is owned by Faringdon House Estate, was still there for this photo in 1985 and is still there now in 2021.

The horses to pull the pump were kept in a paddock behind the Bull and the Police Station where Dove Court is now. The Faringdon Advertiser 15th September 1877 reported that “We have two fire engines, a very efficient superintendent and a good staff of men ready for any emergency; but it cannot be expected these men will leave their homes, often in the dead of night, to work at a fire which is always attended with a certain amount of risk and probably losing a day’s work, and then be kept out of their pay for an indefinite period.” The problem was that a bill for the service would be sent to the owner of the premises who would then pass it on to their insurance company, who would delay or even decline payment and the men would not get paid if at all for a very long time. 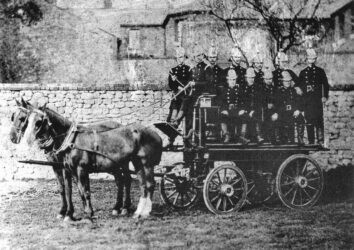 Faringdon District Council started up in the 1890s and took over responsibility for fire fighting; so in 1900 the first uniformed fire brigade was formed with Mr Frank Lane as Captain. A brand-new ‘Merryweather Fire Pump’, still a manual pump was purchased. The brigade consisted mainly of volunteers and if needed, bystanders would be pressed into service to help work the pump, 7 men each side were needed. The photo from around 1904 shows the pump cart hitched up to the horses in their paddock off Bull Close, London Street, at the side of the Bull Inn. The back of the old Victorian police station in Coach Lane is in the background. Dove Court has now been built on this site. The two horses were purchased by the parish council. 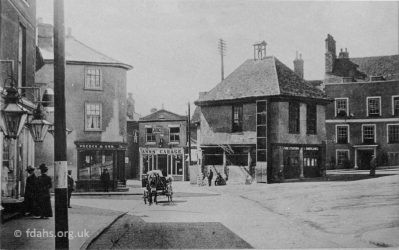 In early 1903 the appliance was kept under the Market Hall with Captain Haworth as superintendent and 12 men. The town’s ambulance was kept there as well. It must have been a problem in an emergency with the horses still kept in the paddock, which could be accessed from the lane at the side of the Bull, half way up London Street. A ladder and a net were added to the left side of the building for the firemen to practice getting down from a burning building. The structure on the side of the town hall where the war memorial names are now was for drying canvas hose. The hand pump was eventually replaced with a mechanical pump which was towed by Anns’ breakdown lorry.

Extract from Faringdon Advertiser 4th April 1903: The fire engine has at last been removed to her new berth beneath the Old Town Hall, which will be more convenient in every respect.  The space allotted has been bricked up on either side, and lined with match boarding, whilst in front are doors with glass panels.  Gas and water have been laid on, and since the members of the Brigade have been busy arranging their helmets and all the accessories, the place presents a workmanlike appearance, and is one in which they will take an interest in keeping in order.  The doors of course are painted the orthodox fire station colour, which, however, might have been dispensed with, and a colour used more in keeping with the old building.  Outside an apparatus has been erected for drying the hose, which, if not elegant in appearance, will furnish a long-felt want, and be the means of preserving the hose. 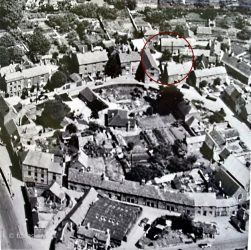 During the 1930s, the fire station moved to a site in Bromsgrove Place on the corner of where the new Hart Avenue joins Bromsgrove today. The aerial photo shows Bromsgrove, possibly taken in the 1950s, with the location of the fire station circled in the top right-hand corner. If you look closely you can just see the pole they used to dry the hoses.

The first motorised appliance wasn’t purchased until around 1931/32. It was a Morris Commercial Pumping Appliance and by 1937 the fireman themselves had raised enough money to purchase a Morris Commercial Personnel Carrier to go with it. At that time the brigade consisted mainly of volunteers, who were paid a retainer of 5/- a quarter. 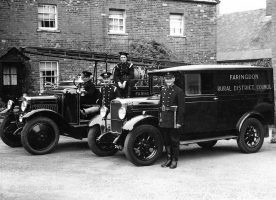 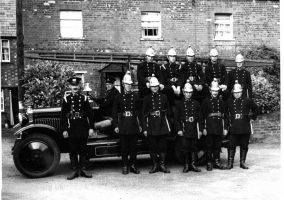 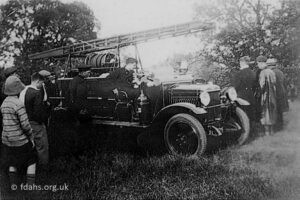 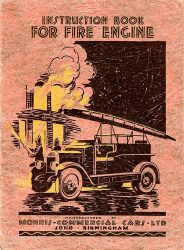 The original instruction book for the fire engine, cover shown here, is stored in our archives.

1940s. At the outbreak of war in 1939, the brigade became part of the National Fire Service and had 6 full-time members. All reverted to part-time after the war. 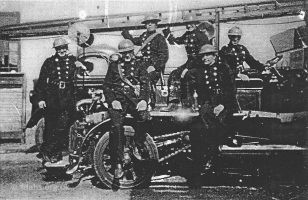 Faringdon firemen were also sent to blitzed towns and cities during the war:  Exeter, Bristol, Avonmouth, Southampton, Coventry, and London.

Leading Fireman, John Tucker, 29 years old, from The Nurseries, Stanford Road, Faringdon was recommended for an award for devotion to duty during a raid on Coventry on the nights of 14th and 15th November 1940. He was in charge of a party fighting a fire in the basement of a commercial building when he fell into a vat of enamel concealed under water. After his clothes were cut off him and dressed only in an overcoat he continued fighting the fire until 7am and then drove for part of the journey home to Faringdon. “I suppose the fire kept him warm but the journey home must have been cold, in mid-winter. Cars did not have heaters then and I doubt if fire engines did either.” His brother Mike Tucker was killed during the war and the area that is now Tucker Park was donated to the town as a memorial by the family, and Butts Road got renamed as Park Road. 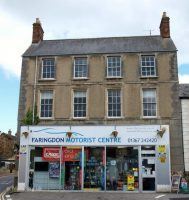 In 1943, the fire station moved again to Marlborough House on Arthur’s Hill at the corner of Marlborough Street and Bromsgrove – now Faringdon Motorist Centre. 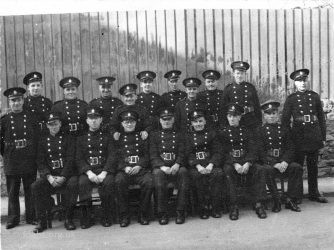 In 1948, the Fire Service became the responsibility of the County Authority, so Faringdon became Station 19 in ‘C’ division (C19) of the Berkshire and Reading Fire Brigade. The control room at Swindon in Wiltshire did the mobilizing until the 1960s when that was transferred to Reading and then to Kidlington in 1974. Faringdon are now controlled by Thames Valley Fire Control, based at Calcot near Reading, who handle all fire calls and control all fire stations in Berkshire, Buckinghamshire, & Oxfordshire. 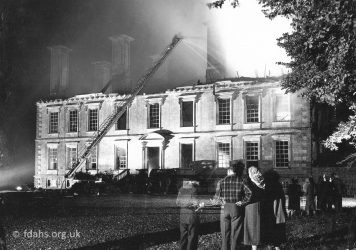 1952. Fire at Coleshill House on 23rd September. The house had been the war time home of Churchill’s Auxiliary Unit. One of the most difficult fires the brigade had to deal with. First on the scene was the Faringdon appliance and a total of 15 attended from 12 brigades brought in from the three surrounding counties. The photo shows the City of Oxford Fire Brigade’s open cab turntable ladder at the top directing the hoses down into the centre of the building. There was great difficulty in getting water to the fire, which had to be pumped a mile uphill from the river. The firemen were showered with molten lead as they fought there way into the house. Two firemen where injured and taken to hospital. Eventually the last firemen to leave the building had to jump from the first floor windows. The building was completely destroyed and consequently had to be demolished and was never rebuilt. More… Coleshill. 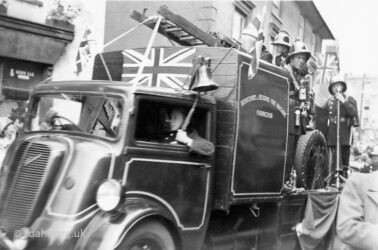 1953. The Faringdon fire crew turned out for the Queen Elizabeth II Coronation celebrations.

They have stopped here in ‘The Narrows’, exactly on top of where the old brook passes under the road. The port well and old pump house can be seen in the distance on the right. The shop on the left selling Burny Ale, must have been an off-licence at this time. It is No.10, the last premises in Cornmarket, previously Yeatman’s (taylors). The shop hosted many different trades before it became the barbers shop it is today. 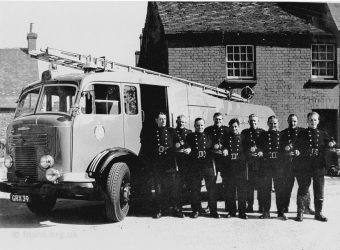 On the 20th July 1954 a B47 Aircraft of the United States Air force from R.A.F. Fairford crashed at Radcot near Faringdon, Killing one member of the crew of four, Faringdon and Bampton Firemen attending.

February 1957, an article in the Wiltshire Gazette and Herald reported how Faringdon firemen were able to put out a fire above Ballard & Co, the chemist’s shop in the Market Place, while customers continued to browse in the shop. The shop at no.17 has remained as a chemist’s shop since Ballard & Co was established there in 1830. It was taken over by Dove some time after 1995 and then by Boots around 2014. 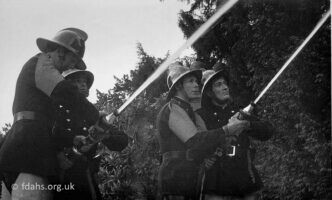 On 23rd June 1961 the fire service moved into the current and purpose built Fire Station in Station Road. It was officially opened in November later that year. 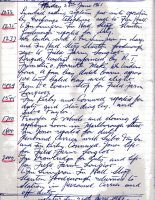 Up to the late 1960’s the fire station kept a log of activities (after the late 1960’s a record of occurrences are kept). Shown here is the log for the day they moved into the present fire station, as you can see they also had a call to a fire in a Dutch barn at Field Farm, Loncot. Fire brigades from Swindon, Bampton, and Wantage were also called out as it was feared that the fire would spread to nearby buildings. As the siren at the new station was not up and working they had what they called ‘snow ball’ calling – fire control phoned one fireman who then phoned a second fireman they then both phoned another, snowball calling. 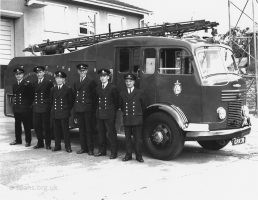 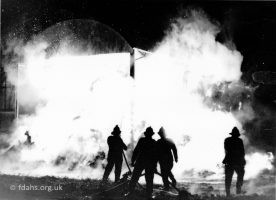 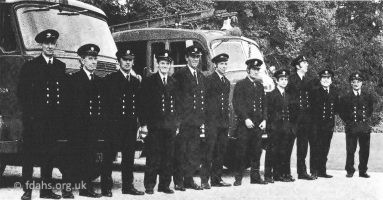 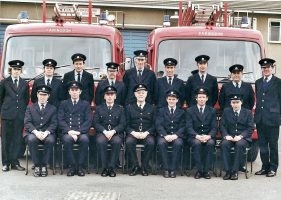 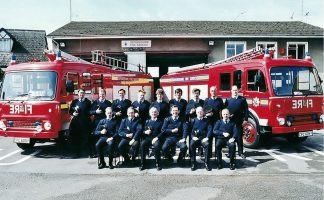 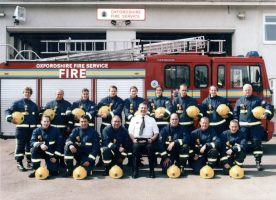 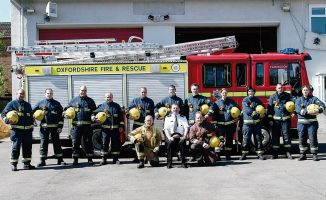 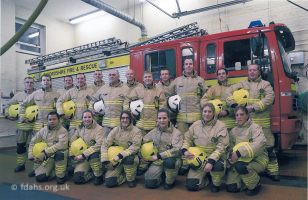