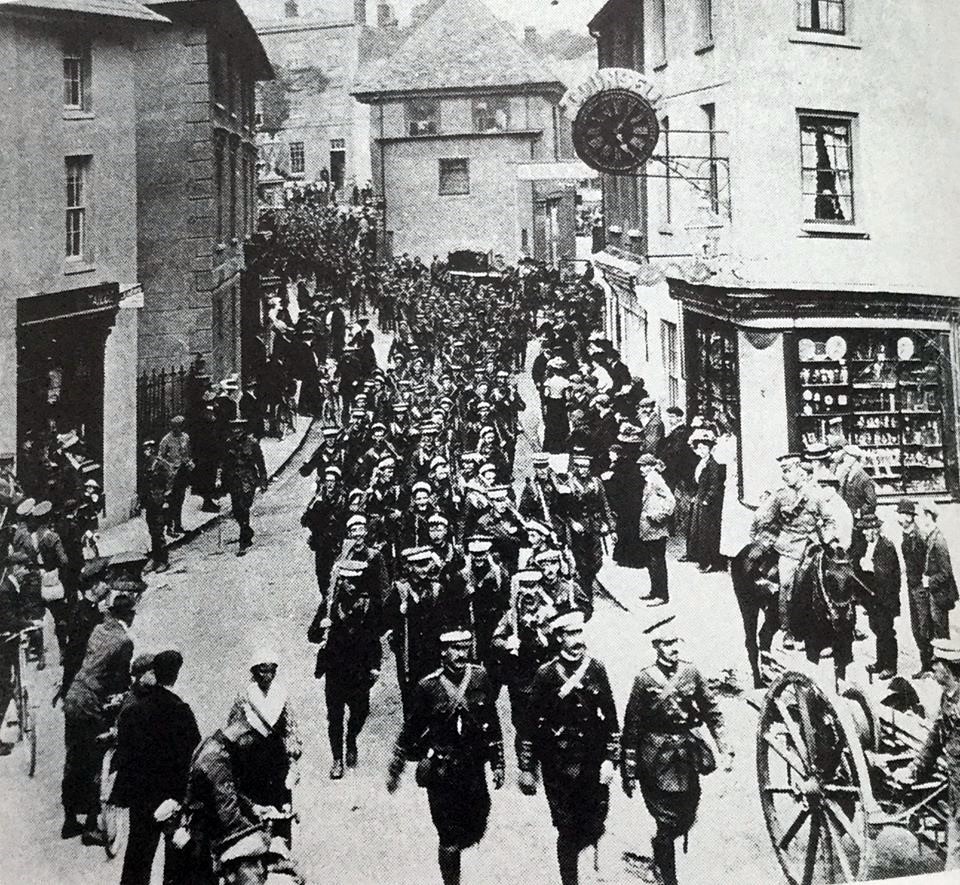 1911. Army manoeuvres through Faringdon. The troops were en route from the feeding station at Church Path farm. There was an enlisting station based in the Bull Inn on London Street. They would receive 5/- for every man they enlisted, and as beer was only 2d a pint, they considered it a good bargain to spend up to 2/6 per man in their efforts to persuade men to enlist. The men were known as ‘Volunteers’ and they paraded through the town quite regularly. They were all keen riflemen and had their targets in a field at the end of Southampton Street, firing at these from the butts at the foot of Jasper’s Hill. Hence the naming of Butts Road, Butts Close and Volunteer Way. 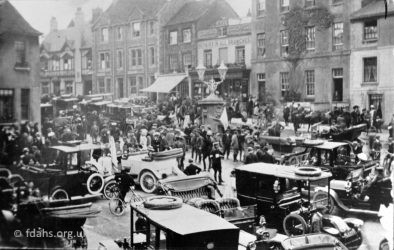 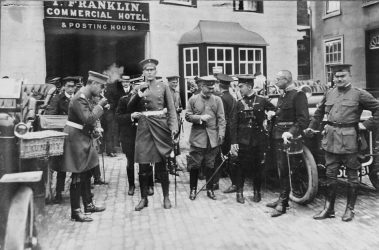 1911. An early traffic jam in the Market Place. Lots of London taxis, those with a spare tyre on the roof, had brought many foreign military attaches to Faringdon to observe military manoeuvres taking place near the town. The Prime Minister, Mr Asquith, accompanied by the Duke of Connaught (his car is the white one in the first photo) and many others, watched the proceedings. The second photo shows military officers from different nations emerging from the Bell. The tall German officer is Crown Prince Wilhelm of Germany, the son of Kaiser Wilhelm II.

As well as all these important people descending on the town, this event must have been quite a shock for the population of Faringdon when you consider that motor vehicles were only just becoming widely available and then only for the more wealthy classes, so very few had ever been seen on our streets before.

Britain declared war on Germany on the 4th August 1914, when Germany attacked France through Belgium. Germany, once a number of independent sovereign states had joined together as one country, and now formed an alliance with the adjacent Austro-Hungarian Empire and the Ottoman Empire to the east. They then decided to take over the rest of Europe, and also invade the Russian Empire, who were already at war with Japan. And so the nastiest ever battle of the empires had begun. The world was full of empires at this time, the British Empire, by far the largest, covered around 25% of the world’s land surface. At the beginning, the young men of Britain were asked to volunteer for service in the armed forces but so many thousands were slaughtered in battle that by January 1916 conscription had to be made compulsory. Villages and towns all over Britain lost many of their young men, a lot were never identified – Faringdon War Memorial.

Around the turn of the century, school attendance was made compulsory for children and one historical consequence of this was that the common masses were now able to read and write, a privilege previously confined to the more wealthy. So for the first time in history, most soldiers were able to write letters home from the battle field. The following extract in the Faringdon Advertiser 5 December 1914 is from a letter to a friend written by a Faringdon lad serving with the Royal Berks Regiment, who was with his Regiment in India. when the war broke out:-

Expeditionary Force, 24/11/1914. “Just a line or two to let you know that I am quite well and in the best of health. I cannot let you know where I am as it is forbidden to put either address or place of abode, but the latter is the trenches. I am able to say that at present all the Faringdon boys in our Regiment are quite well. We get some cigarettes, tobacco, and a few matches given us every three days; we also get plenty of food. The weather is rather cold, but dry, which is better than rain on these turn outs. I get a good deal of news from home, so don’t think that we don’t get a paper. I get the Advertiser when the letters come. The people here are very good what few there are. Only the [– line of text unreadable– ] having a rest, a family came and had a look at their old home; it was standing, and that’s all. The poor woman cried with grief. Just fancy our old home with not a person left in it, the old Church shattered to pieces, nearly all the houses with only the chimney left, the cattle and fowls running about with no one to look after them. Then they are asking for more men. The young men at home don’t realise what it would be like if the Germans did get to England, and I think it is their duty to help stop them. I stayed in a billet on the way here, and we fared well. The only thing about it is the people don’t know what tea is; they only seem drink coffee, which, however, is very good. Will write again when I have a few minutes to spare, that is if the German ‘Black Marias’ or ‘Jack Johnsons’ as we call them, don’t come and put us out of mess, but a lot of their shells are like bags of lard, they lie where they fall and don’t burst; when they do they make a hole about 12 feet in diameter and 3 feet deep – not so bad, is it? They try to blow up our Artillery with these.”

At the start of the war in Europe about 250,000 Belgian refugees came to Britain to escape the virtual demolition of their country. Many local towns offered hospitality to the families. Relief funds were set up and events organised to raise funds. A sale of “Belgian Favours” was held in Faringdon on market day Tuesday 3rd November and raised £8 5s 0d, equivalent to about £90 today. Lechlade had a town collection and raised a somewhat better £54. The following other reports appeared in the local paper throughout the month, along side the all too frequent “Killed in Action”  and endless “Casualties” notices. Three refugee families were settled in Burford, a 15 year old son of one family attended the grammar school, another son had been left behind in the Belgian Army. Over 50 refugees arrived in Witney. A family of four was housed in a cottage at Lechlade Manor. Seven refugees were given the use of a cottage in Bourton. 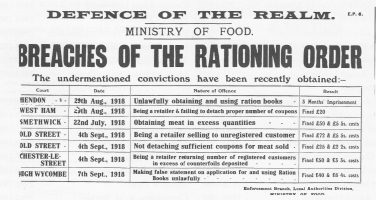 Breaches of the Rationing Order by people who misused their ration books during the 1914-18 War were severely punished, as can be seen from this notice. 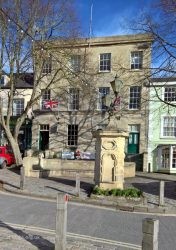 In August 1914, Sir Alexander Henderson and Lady Violet C. Henderson (current Lord Faringdon’s grandparents) offered the Pump House in the Market Place to be used as a hospital for the wounded. The hospital was prepared and equipped by the Faringdon Branch of the British Red Cross Association. The resident Matron, Miss Fenton, was in sole charge, and the Red Cross nurses were on duty in relays of two, whilst the ambulance men attached to the Faringdon Branch of the British Red Cross Society acted as orderlies. Everything was done to ensure the care and comfort of the patients. On the ground floor was the kitchen, the men’s reading room and two reception rooms. On the first floor were 12 beds for patients; on the second floor were a bathroom and offices; and on the third floor were four beds for patients, the Matron’s bedroom, the maid’s bedroom and the Red Cross Nurses’ bedroom. Hot and cold water was also laid on. Food and clothing was donated by the local people, among them being local business men and by collections in church.

The first patients to arrive  were 11 wounded soldiers – 4 Belgian and 7 English. The Englishmen included two from our own neighbourhood: Pte W. Wheeler, 1st Royal Berks (Uffington); and Pte A. Harris, 4th Royal Berks (East Lockinge). Another, Lance Corporal Hammond, of the 1st Berks Regiment, arrived the following week. He was living and working in Faringdon as a jobbing gardener. but at the outbreak of war he was a reservist, he had no disease or wound, but was suffering from shock caused by the explosion of a shell while in the trenches.

The hospital outgrew itself within only a few months and transferred to Lady Henderson’s home in Kitemore House, Shellingford. She and four nurses cared for over 242 wounded ‘inmates’ over the next 11 months. Lady Henderson was a registered nurse and had cared for her husband, brother, father and uncle, who had been wounded in the Boer War (1899-1902). 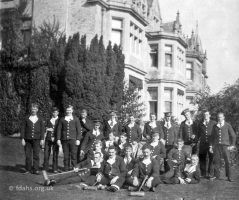 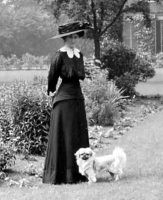 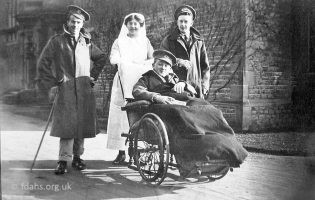 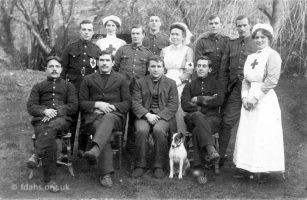 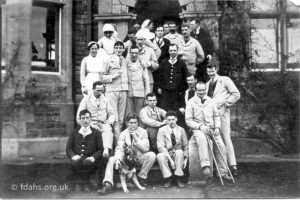 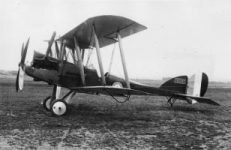 AEROPLANE IN TROUBLE – A member of the Royal Flying Corps, whilst on a journey from Bristol to Oxford on Saturday last, experienced engine trouble on nearing Faringdon, and decided to land. This he effected in a field near Ashen Copse Farm, but smashed the wheels of the machine in so doing. Assistance was wired for and a break-down gang arrived from Chiseldon, but the necessary repairs were not completed until Sunday afternoon. The airman then took his seat and flew around for some minutes, in the course of which one of the wheels came off, and in landing a few fields away the machine was again damaged. This necessitated staying over another night, and it was nearly middle day on Monday before the airman was able to take his departure. The whereabouts of the machine soon spread abroad, and hundreds of people from Faringdon, Highworth, and the surrounding villages witnessed the proceedings on Sunday, it being the first time that many of them had seen a flying machine at close quarters. The airman, during his stay, was kindly entertained by the Hon. Mrs D. Pleydell Bouverie at Coleshill House. Faringdon Advertiser 30 September 1916 (not actual photo).

KILLED IN ACTION – Mr Samuel Ford, of Southampton Street, Faringdon, has received official notification that his son, Pvt. Arthur Ford, aged 26, was killed in action in France on September 29th. He joined the 1st Batt. King’s Company Grenadier Guards in September 1914, and had been serving in France for about 18 months. He had for some time been acting as stretcher bearer with his regiment, and in a letter written to his father and sister on the 19th September he said that he had been buried by a shell but had got out all right. Much sympathy is felt with Mr Ford and family in their bereavement. Faringdon Advertiser 14 October 1916