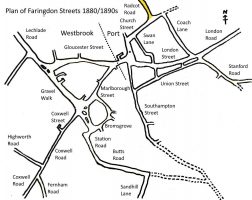 Radcot Road – one of the roads that made Faringdon the important five-way road junction of the past. It was once an important trade route between the Saxon kingdoms of Wessex and Mercia (later from Berkshire into Oxfordshire) at the old border on the River Thames at Radcot Bridge. It gave access to the stone quarries near Burford and to the wool merchants of Witney; as well as routes to the north of England. Also, according to an advert that appeared in the Faringdon Advertiser in 1931, five Bristol buses used this road daily – sadly there are no buses today. 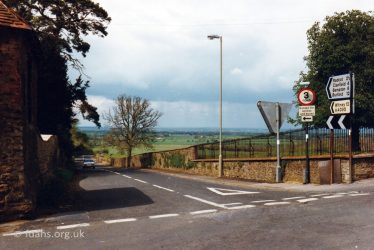 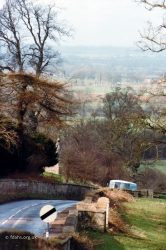 Looking down Radcot Road from Church Street, deep into the valley of the River Thames. The Cotswold Hills can be seen on the horizon across the other side of the valley. The statue in the grounds of Faringdon House can be seen overlooking the road in the second photo (more below). The original road used to run straight up Church Street from the Market Place through the current entrance to Faringdon House beside the church, passing close to house. In 1780, when having the house rebuilt, the Lord of the Manor, Henry James Pye, had the road diverted by an Act of Parliament to its current position further up Church Street. Coming back up the hill there is a sharp left bend at the bottom where the road veers off from the old course that went straight up through the grounds towards the house and church. 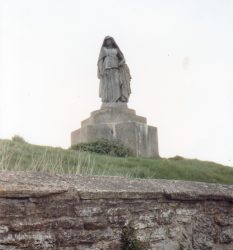 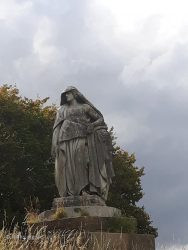 The statue in the grounds of Faringdon House that can be seen overlooking the road on the left was purchased from the old Houses of Parliament which had five of them to sell. This was before the medieval royal palace used as the home of the British parliament, was largely destroyed by fire on 16 October 1834. Each of the statues is said to have depicted one of the five continents, this one being Africa. It’s current position provides an excellent view over the Thames Valley and concealed under the statue is a World War II pillbox. It had spy-holes to observe an enemy approaching and would have been defended with Bren guns and anti-tank guns. 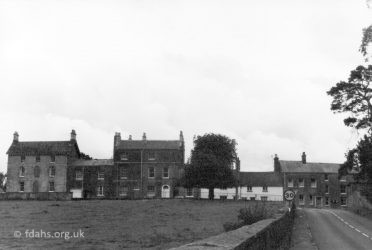 This photo was taken in 1982 from a little down the road and turning around looking back up the hill  into Faringdon. When you arrive from travelling across the relatively flat valley of the River Thames there is quite a steep climb up the Radcot Road in order to enter the town. Church Street runs across the top of the hill. The large house at the end on the far left is Bleak House, which was originally the coach house and stable for the adjacent house called The Grove. The field on the left of the road extends down into the valley with views across more wide open fields as far as the eye can see.

Once a practically straight road from Faringdon Market Place to Burford High Street, this road now labelled the A4095 has been altered by three bypasses during its history. One around Faringdon House in the late 18th century, at Radcot around the castle built in the early 12th century, and more recently a wide diversion at Black Bourton via Alvescot to skirt around RAF Brize Norton, when the building of the airfield started in 1935.

More about the bridges and village of Radcot…