The Crimean War was fought mainly on the Crimean Peninsula, Ukraine on the northern shore of the Black Sea. It was fought over the rights of the Christian minorities in the Holy Land, then a part of the declining Ottoman Empire, which was under threat from the Russian Empire. The United Kingdom and France joined in and Russia was defeated. The Russian tsardom and empire was severely crippled by the war, highlighting the need for many fundamental reforms, which culminated finally in the socialist revolution of 1917. 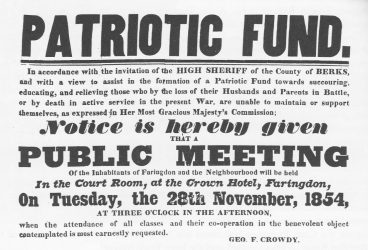 An appeal in Faringdon to launch a Patriotic Fund to help servicemen’s families who had lost their menfolk in the war.

The Boer Wars were fought between the United Kingdom and the self-governing Afrikaner (Boer) colonies of South Africa over the British Empire’s influence in South Africa. The trigger of the second war was the discovery of diamonds and gold in the Boer states and the farmers were reluctant to give up their land. The final defeat of the Boers led eventually to all the colony states joining up to form the Union of South Africa in 1910. 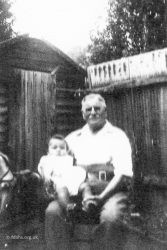 William Goodenough of Faringdon in around 1890 prior to going to war. He survived to have a grandson (Roger Dimmock) as shown next in the late 1940s.